From Swim Mom to Scilly Swimmer 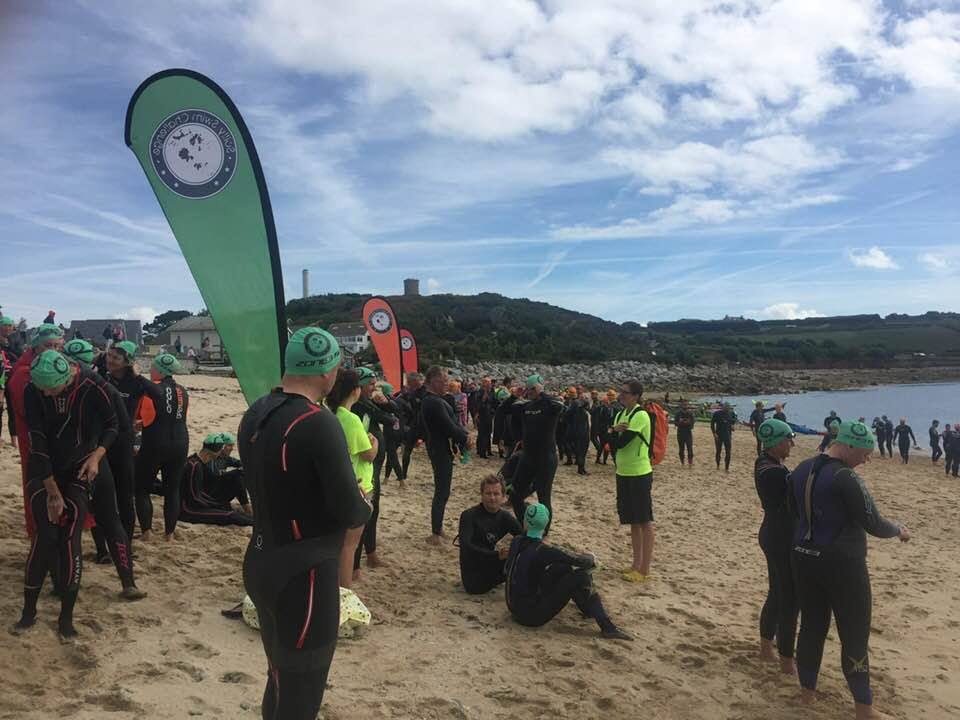 How did one of my fellow Southern California swim moms find herself 35 miles off the coast of Cornwall, UK, swimming 15K and walking 10K through the Isles of Scilly? Current photo via Linda Siffleet

How did one of my fellow Southern California swim moms find herself 35 miles off the coast of Cornwall, UK, swimming 15K and walking 10K through the Isles of Scilly? It’s quite a leap to go from volunteering at your kids’ meets to swimming in the Scilly Swim Challenge.

My friend Linda Siffleet was a typical swim mom—she helped out at meets and grew more involved as the years went by. She became Clerk of Course and her husband Karl served as a board member. Their swim passion grew and they jumped into the pool themselves. Several years ago, we began swimming Masters with our kids’ club, the Piranha Swim Team. Linda and I swam in our first Masters meet together and commiserated over how nervous we were. She and her husband swam with our Masters group two years ago at the Tiki Swim in Oceanside, CA for their first open water swim.

She read about the Scilly Swim Challenge from a blog and thought it would be an amazing challenge and a beautiful place to visit. Her husband agreed and they committed to going last year. Last week they completed their second trip and swim.

“We decided to do it because it was in a place neither of us had ever been, it was a huge challenge and neither of us of ever swam anywhere close to that distance in one day. It seemed like a great adventure. Plus signing up motivated both of us to swim more,” she said.

Event founder Dewi Winkle said, “We are on year five now and 10th Challenge just completed. Nick Lishman and I came up with the idea in 2013 and we thought the islands are so beautiful and the attraction of swimming between them would be well received. We started in 2014 and have now built to three events a year with up to 150 people per event.”

Dewi said their plans include a race around St Mary’s as a relay event and a test event in Croatia in October. Currently, they have a two-day and one-day swim in September and a Spring Swim in May.

Swim and Walk the Islands over one or two days

Whether you choose to complete in one or two days you will experience the amazing swimming and beautiful scenery Scilly has to offer.

It’s not a race and the emphasis is on everyone getting round safely.

While you’re swimming we will transport a bag for you which will be available at the next island. You will then carry it to the start of the next swim.

There are food stops at the end of each swim.

Linda said to prepare for the Scilly Swim Challenge they increased workouts from two or three days per week to four or five. Piranha Head Coach and CEO Jeff Conwell upped their yardage slowly from 2500 to 3700 yards per workout.

“Coach Jeff has been really helpful because he would give us specific sets for the longer distances. He made sure that we wore our wetsuits at practice. He talked to us about chafing and using Vaseline, and staying warm,” she said. “He also worked with us on sighting. Plus, he kept telling us that we could do it—so we felt like we could do it.”

This trip, Linda and Karl signed up for the one-day swim but arrived several days early to get used to the 59 degree Fahrenheit water and like true swim parents they volunteered to help out or “crew” for the two-day swim. The two-day swim allows a more leisurely pace than the one-day challenge. They checked swimmers in and out of the water and helped with the baggage boat. Linda said the support staff is incredible and includes “30 kayakers—they were awesome! Five safety boats (power cats) and a baggage boat.”

Swimmers can swim as much or little as they want. It’s not a race, but a swim. If they need a break they can hang onto a kayak or climb aboard a boat and go to the next island. In between, they are fed snacks and drinks like hot tea, soups, salads, Cornish pasties, homemade pastry, etc.

“I think having a big event or challenge is really motivating. I think about all of it when I swim—like making new friends, getting to go out of the country and eating different foods. But also I think about the challenge of turning my arms over in cold water for hours and miles. Plus there’s a lot of walking so you have to train for that too.”

Their adventure has motivated me to attend more practices per week—and someday to take on a new challenge outside my comfort zone.

What adventures have you done and do you feel a sense of accomplishment when you try something new?

Things are easier today for open water swimmers than in the days of Captain Matthew Webb who swam breaststroke and was the first person to crossed the English channel in the 19th century. The poor man died in this 30’s trying to swim over Nigrana Falls.