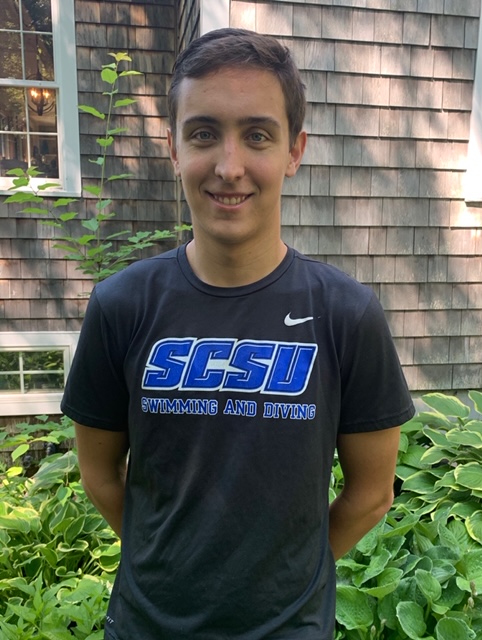 Gray is the first former UConn swimmer to have announced his new home after the program’s demise was announced on June 24. When programs are cut that late into the summer, there is concern about the challenge for swimmers to find a new school so close to the beginning of the new academic year. Swimmers were given the option to stay and train at UConn for one final season, the 2020-2021 season.

Gray is a native of Trumbull, Connecticut, which is about an hour from the UConn campus in Storrs. His new campus will be even closer – Southern Connecticut State is less than 20 miles from his home in New Haven, Connecticut.

SCSU competes in the Division II Northeast 10 Conference. Last season, the women’s team were conference champions, while the men placed 2nd – 231 points behind champions Bentley University. Last season, the SCSU men sent 1 swimmer, senior Leo Laporte, to the NCAA Division II Championship meet. He was seeded 8th in the 200 fly, though that meet was 3 sessions in when it was ultimately canceled because of the coronavirus pandemic.

The SCSU women also had 1 individual qualifier for the meet.

The move to Division II will play to Gray’s strengths. The 1000 free is probably his best event, and that is not typically a championship event in Division I, but it is in Division II. His best time of 9:24.58, which was done in high school at the YMCA National Championships in 2017, is already within 5 seconds of an NCAA qualifying time.

Gray’s only best time in his 2 seasons at UConn came in the 200 fly, where he dropped 2 seconds as a sophomore.

He would also have an immediate impact on at least 3, and depending on his 50 free advancement possibly all, SCSU relays.

Great to see students that were put in a tough position find new homes!

Wonder how many current UConn kids are sticking around for the 2020-2021 season. Any idea?

other Kid is going to Rider