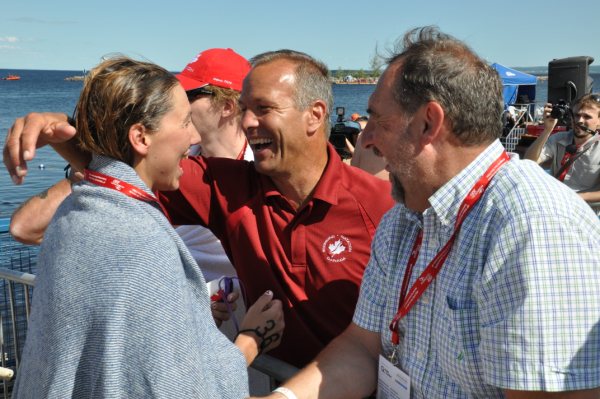 Former Swimming Canada CEO Pierre Lafontaine will return to the pool deck as the head coach of Swim Ottawa for the upcoming season, the club announced on August 1.

Lafontaine, who was named Swimming Canada’s chief executive officer and National Team Director back in 2005, stepped down from the role in 2013 prior to becoming the CEO of Canadian Interuniversity Sport (CIS).

After a 15-year hiatus from coaching, Lafontaine served as the high-performance coach at Swim PEI, beginning in January of 2019, before the announcement of his new role at Swim Ottawa.

“It is our great pleasure to welcome Pierre Lafontaine to the Swim Ottawa family as our new Head Coach,” the club wrote in a release. “Pierre is recognized as one of Canada’s best known swim coaches who has contributed to every aspect of the advancement and success of the sport in Canada and to positioning Canada as a leading swimming nation.

“He exudes passion for sport and excellence in coaching, and is widely known for his creativity and energy on deck. We can look forward to a very dynamic coaching environment for all our swimmers, at all levels, under Pierre’s leadership. He brings new training and development ideas in and out of the water, as well as support to our senior athletes in pursuing varsity swimming careers.”

In between working with CIS and Swim PEI, Lafontaine held CEO roles at both Cross Country Canada and Cycling Canada.

In terms of coaching, Lafontaine has a wealth of experience, including serving as the Australian Institute of Sport (AIS) head coach in 2003-04 and coaching the Canadian National Team at both the 2008 and 2012 Olympic Games.

Swim Ottawa is very much a club on the rise, having been named the most improved team at the 2019 Swim Ontario Summer Festival Championships. The club, which has been around for 17 years, previously went by the name “Gefilte Fish Swim Club” prior to 2011.

Lafontaine’s hire adds to what has been an action-packed last couple of months as several prominent Ontario clubs have changed head coaches. Among the other names changing homes have been Sean Baker joining the Markham Aquatic Club, Dave Ling heading to the Newmarket Stingrays, Darren Ward taking over the reins at Hamilton Aquatic Club, and Robert Novak returning to coach the Etobicoke Swim Club.

Pierre, We did training trips with your team back at CAMO in Montreal in the 90s and I remember you from the pool deck at nationals. Your swimmers always had so much fun and worshipped you! Best training trips – worked hard but you made it fun. Best of luck.

Good luck Pierre. I remember you from your Dynamo days and your enthusiasm and positivity is what I remember most. Good vibes wherever you go.

Good luck, Pierre. I remember your energy and enthusiasm from your days on deck at Phoenix!