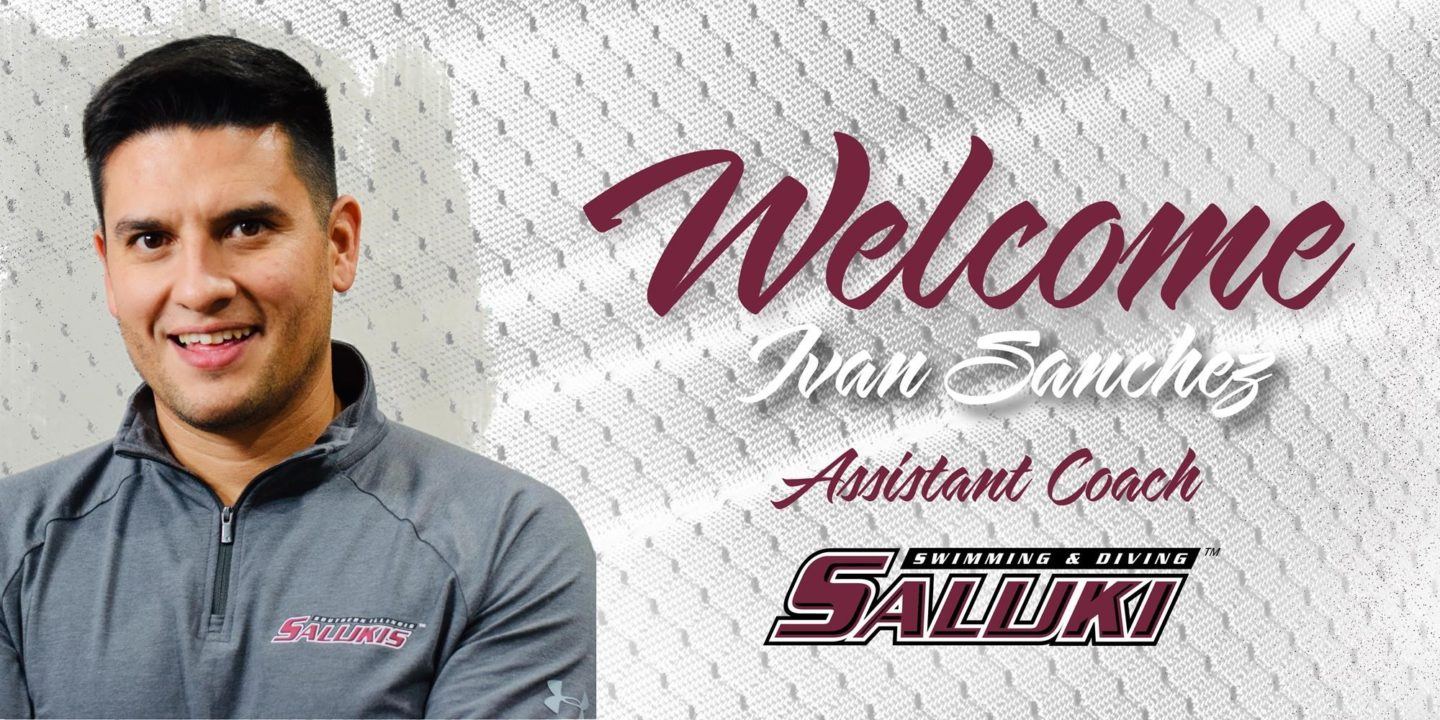 CARBONDALE, Ill. — Southern Illinois swimming and diving head coach Rick Walker has announced the hiring of Ivan Sanchez as assistant coach. Sanchez is a former Saluki, who competed from 2001-05 and served as a volunteer assistant from 2006-09.

“We were saddened at the departure of Elise Knoche and excited for her new head coaching job at University of Wisconsin-Whitewater,” Walker said. “But it is with great pride and enthusiasm that we are announcing Ivan Sanchez the new assistant coach replacing Elise. Ivan brings current collegiate experience and a history of success within the programs that he has worked.  His athletes love him and we are anxious for him to get back home to Salukiland and start working with our athletes.  I know our athletes are looking forward to his arrival.”

Sanchez arrives to Carbondale with 11 years of coaching experience, including the last four as the men’s and women’s swimming assistant coach and recruiting coordinator at Coe College (IA).

During his time at Coe, Sanchez helped the Kohawks break 45 school records and achieve seven NCAA “B” standard cut times. He also coached the women’s team to a second-place conference finish at the 2018 Liberal Arts Championships.

Prior to Coe, Sanchez spent five years (2009-14) as the head coach of the men’s and women’s swimming and diving program at Iowa City High School (IA). Under his tutelage, 10 swimmers broke school records that were over 15 years old and numerous swimmers qualified for the state championship meet. In 2011, he led the men’s team to a sixth-place state finish and produced three state champions.

“Since I started my coaching career, I always thought about how it would be really exciting and rewarding to one day go back and coach the Salukis,” Sanchez said. “It has always been a dream of mine and I am beyond excited to come back to SIU, contribute to the program, help continue with its success, and support our swimmers and divers in the pool, in the classroom and as individuals.”

During his collegiate swimming career as a Saluki, Sanchez helped Southern Illinois to Missouri Valley Conference titles in 2002 and 2004. He was honored as the most valuable swimmer during his junior year and was a co-captain as a senior. In 2004, he became a MVC champion and record holder in the 200- and 500-yard freestyle.

Sanchez also competed as a member of the Mexican National Team from 1995-2008, where he qualified for three Olympic Trials (2000, 2004 and 2008) and competed in many international and national competitions. In 2003, Sanchez swam to a third-place finish in the 15K at Open Water Mexican Nationals.

Sanchez holds an undergraduate degree in management and a master’s in sport management. Sanchez and his wife, Brianna, have three children: Ivanna, Gianna, and Elianna.

They got a good one!