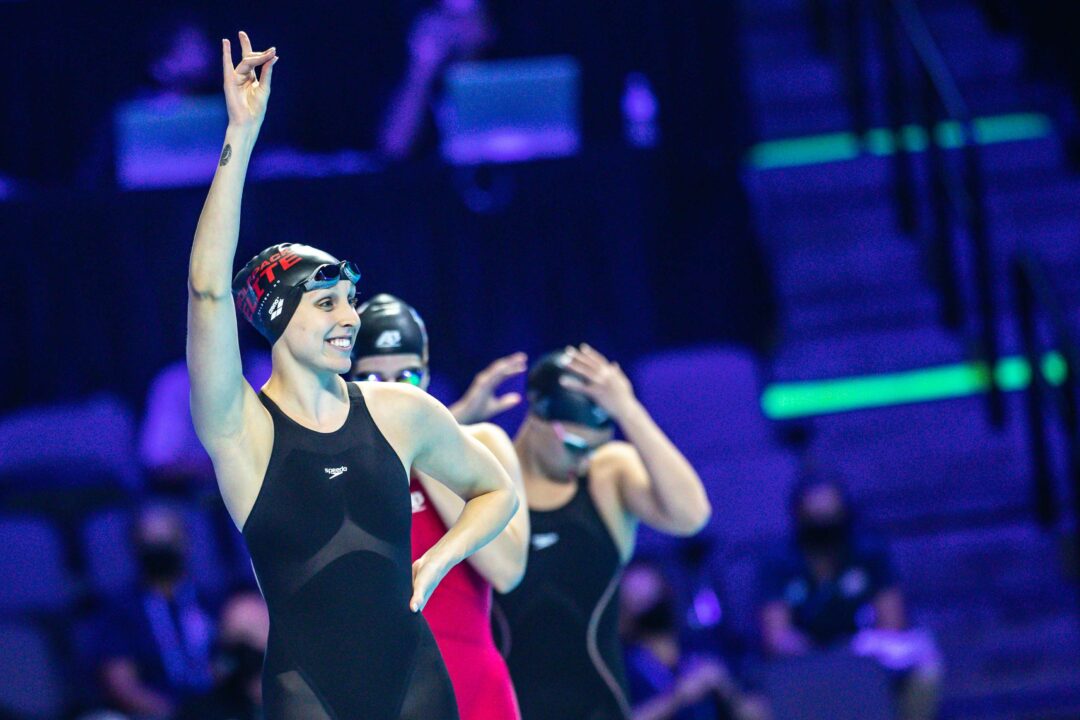 Aly Tetzloff was a 14-time All-American at Auburn in a variety of events, including the 50 free, 100 free, 100 fly, 100 back, and all three free relays. Current photo via Jack Spitser/Spitser Photography

“We are excited to welcome Aly to our Eagle family,” said head coach Dave Rollins, who is entering his seventh season at the helm of the Eagles program. “This process brought a lot of interest and some truly incredible people. In the end, Aly’s energy, passion, and vision set her apart. I am looking forward to getting started and working together.”

Tetzloff brings a wide range of expertise to Fort Myers, where the women’s swimming and diving team competes in the Division I Coastal Collegiate Sports Association (CCSA).

She was a 14-time All-American at Auburn in a variety of events, including the 50 free, 100 free, 100 fly, 100 back, and all three free relays. She won an individual SEC title in the 100 back as a senior in 2019. A native of Crown Point, Indiana, Tetzloff graduated from Auburn in 2019 with a bachelor’s degree in psychology and a sports coaching minor.

Tetzloff’s experience at the national and professional levels should also prove valuable. She competed at the 2016 and 2020 Olympic Trials, where she placed eighth in the 100 fly. The 25-year-old spent the last International Swim League (ISL) season with the Tokyo Frog Kings after spending the first two years with the LA Current. She has also competed professionally on the TYR Pro Swim Series.

“I am very grateful for Dave and the FGCU support staff for welcoming me into the Eagle Family!” said Tetzloff. “I’m excited to instill knowledge and support that I learned and had as an elite level swimmer into these women. I can’t wait to see what they’ll accomplish in and out of the pool. Wings Up!”

FGCU placed 2nd at the 2022 CCSA Championships behind Liberty. The team’s roster last season featured 32 swimmers, eight of whom were seniors or fifth years — including Swimmers of the Meet Wiktoria Czarnecka and Petra Halmai, who combined for 12 medals (10 gold) at the 2022 CCSA Championships. It marked the 11th time in 15 years that the Eagles produced the Swimmer of the Meet.

Tetzloff replaces former FGCU assistant Taylor Loewen, who’s stepping off the pool deck for now after one year in the role. The Eagles had two assistants the previous year (assistant coach Lara Jackson and volunteer assistant KT Kustritz), when they tied Liberty with 1,748.5 points for a share of the league crown. FGCU has won three CCSA titles in six seasons under Rollins.

In February, Tetzloff spoke out about the ISL’s failure to make timely payments and how it has impacted her ability to stay in the sport from season to season. She said that, in spite of her team racing its final meet last October, she had not received a single solidarity payment. Tetzloff, a sprint butterflier and freestyler, scored 69.5 points for the Frog Kings last season in five matches, averaging almost 14 points per match.