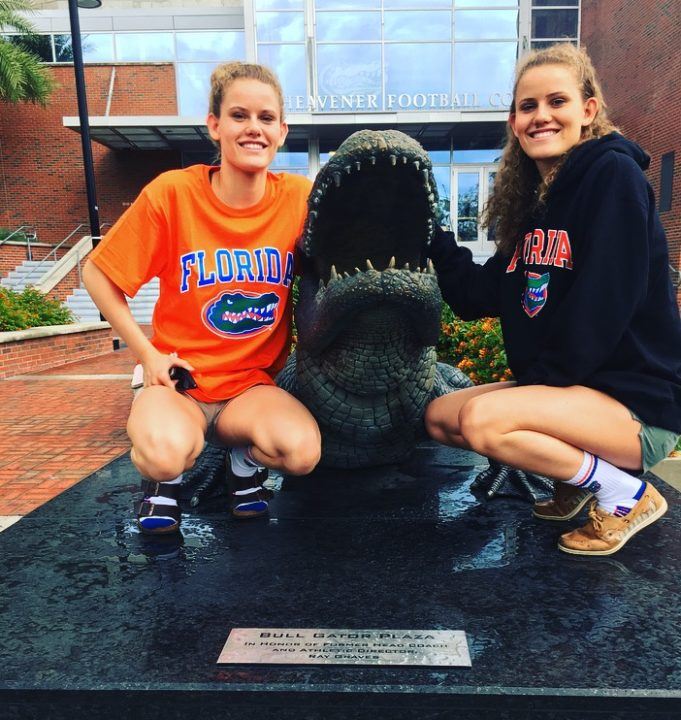 After scoring zero points at the 2017 NCAA Championships, the University of Florida women are priming themselves for an upward trend starting very soon. Twins Mabel and Rosie Zavaros, natives of Canada and members of the Oakville Aquatic club in Ontario, have verbally committed to the Gators starting in 2018.

Very excited to announce our verbal commitment to the University of Florida. We chose Florida because of the outstanding swim team with stellar academics. They truly believe in hard work and know what it takes to be the best. The team was very friendly and most importantly we felt at home. We wanted to thank our parents, family and friends, along with our Coach Sean Baker and many other coaches that have helped us along the way. Very excited to be Gators!

Both girls are part of the Canadian youth revolution that began with names like Penny Oleksiak, Taylor Ruck, and Mary-Sophie Harvey. The twins are going to be competing this summer for Canada at the 2017 World Junior Championships in Indianapolis after strong performances at the 2017 Canadian Worlds Trials this spring. Mabel touched 3rd in the 50 fly and 200 fly and 4th in the 100 fly, while Rosie was 11th in the 200 back.

Both sisters will be of immediate value to the Gator women. Florida was pretty weak in back and fly this past season, and depending on whether or not Liliána Szilágyi ends up swimming this season after she was supposed to join this past January, that situation could remain for another year. While Emma Ball proved to be a solid medley backstroker and Sydney Sell was strong in the 200 back, Florida lost its top butterflier after this year in Alyssa Yambor-Maul. The incoming class for Florida is almost entirely made up of freestylers, which won’t help the back/fly hole either, but Szilágyi (57/2:06 LCM fly) could really change that if she swims next season.

Fun fact: Mabel and Rosie will be one of four sets of twins swimming under Gregg Troy in 2018. Naza and Ludo Boscaino (class of 2020), Ethan and Clark Beach (class of 2021), and Willie and Isaac Davis (class of 2022) are the other twins who compete (or will compete) on the men’s team.

The Zavaros twins join an already stacked class of 2022 ready to turn things around for the Gator women:

Maybe Troy has a thing for twins?

Aren’t the Davis brothers also twins that are committed to swim for Florida starting 2022?

4 sets of twins. Will and Isaac Davis will be on campus Fall 2018 as well