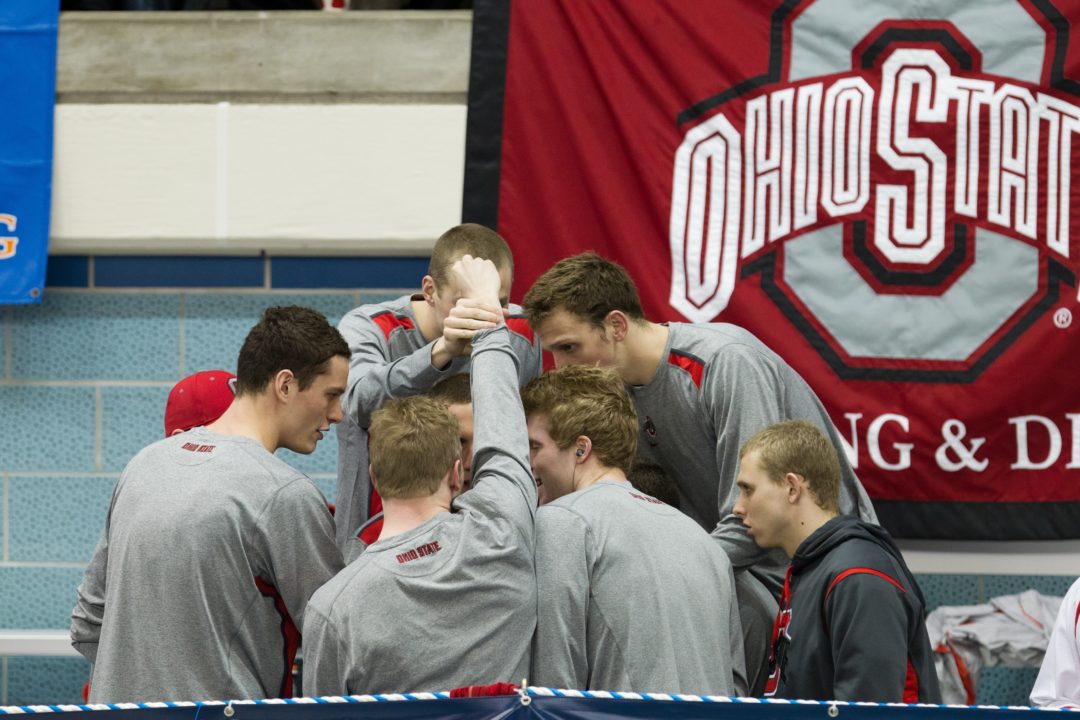 The Buckeyes announced the hire today in a press release. The move fills the first of two coaching vacancies on the Ohio State staff after the school combined its men’s and women’s programs earlier this spring. That came after longtime men’s head coach Bill Wadley announced his retirement just a few days earlier. The new combined program will be headed up by now-men’s and -women’s head coach Bill Dorenkott.

Bowe moves into an associate head coaching role on the men’s side, after serving as an assistant at Indiana. Bowe spent a year at Indiana, and coached at Eastern Michigan for three seasons prior to that. News broke that he’d be moving on to a new program earlier this month, when Indiana announced its own hiring of club coach Mark Hill, who had previously coached at Michigan. In all, it winds up being a bit of a shuffle through the Big Ten, with Hill jumping from Michigan to Indiana (by way of Old Dominion Aquatic Club) and Bowe from Indiana to Ohio State.

The full Ohio State press release is below:

“I’m really looking forward to joining Coach Dorenkott, his staff and the rest of the Buckeye family,” Bowe said. “It’s an exciting time for this newly combined program and I’m confident that with the first-class resources and such a dedicated and passionate coaching staff, we will challenge for Big Ten Championships and NCAA Honors in the future.”

“We did an extensive search to find the best person to lead our men’s program as the Associate Head Coach of Men’s Swimming at Ohio State,” Dorenkott said. “Matt Bowe rose to the top based on his strong credentials, outstanding recommendations from leaders in the sport and his desire to be a part of something special. Matt comes to the Buckeyes at a pivotal time in our program’s evolution.”

Over the course of the meet, the Hoosier men had 13 individuals earn a total of 32 All-America honors – the most in program history in 42 years since the team tallied 36 in 1975.

For the IU women, it was the top Big Ten finisher at the NCAA Championships for the third-straight year, as the Hoosiers posted back-to-back top-10 finishes at the NCAA Championships for the first time since accomplishing the feat three times-in-a-row from 2008-10. Eight individuals earned a total of 24 All-America honors, marking the sixth time in the last nine seasons that Indiana has had 20 or more All-America accolades. Lilly King led the way, defending her NCAA titles in both the 100 and 200 breaststroke.

“Matt has a terrific ability to connect with young people,” Dorenkott said. “He has a strong presence on the deck as well as a keen eye for the technical side of the sport. We are excited to share the deck with one of the rising stars in the swim coaching ranks.”

Bowe also spent time as an assistant coach at Eastern Michigan, where he helped coach the men’s and women’s swimming teams to a total of 11 individual MAC titles, eight MAC records and 24 school records in his three seasons on the staff. Also during his time with the Eagles, Bowe helped qualify three swimmers for the NCAA Championships, including Delaney Duncan who earned Honorable-Mention All-America honors in the 100 breaststroke.

In 2015, Bowe served as an assistant coach for Team Europe at the Mutual of Omaha Duel in the Pool.

“Matt is a great fit for Ohio State,” said Ben Titley, who has both coached Bowe and served as a mentor in his coaching career as well.  Titley coached Canada’s Olympic swim team in 2016 and previously coach Great Britain’s Olympic squads in 2004, 2008, and 2012. “He is a forward thinking, passionate young coach who will bring enthusiasm and international experience to the entire program.  His work ethic and attention to detail will help maximize the potential of the athletes and staff he will engage with on a daily basis.”

Bowe was a coach at Loughborough University prior to his arrival at Eastern Michigan. It was there that he coached the US Open champion in the 200 fly, Tilly Gray.  Bowe also spent time as an assistant coach at the Great Britain National Centre in Loughborough from 2009-2012, where he coached back-to-back world champion and world record holder in the 50m back, Liam Tancock, as well as two-time world silver medalist in the 100m free, Francesca Halsall.

A native of Silecroft in Cumbria, UK, Bowe had a tremendous swimming career. As a member of Team Great Britain from 2003-2009, Bowe was the British champion in the 100m fly in 2006. In that same year, he claimed podium finishes as a part of the 4x100m medley relay team, earning a silver medal at the Commonwealth Games in Melbourne and a bronze medal at the European Championships in Budapest. Bowe was also a finalist in the 100m fly at the World University Games in Belgrade (2009) and Bangkok (2007), and swam as a finalist in the 2007 World Championships in Melbourne.

Bowe graduated from Loughborough University in 2009 with a BSc First Class Honours in Sports Science and Management and received his Master’s degree in Sport Management from Eastern Michigan.

He’s going to our house

Good For OSU! Matt is smart, nice and ambitious

What happened at IN then???

Promotion and more chance to have imput in training

so so so happy for him! he deserves the responsibility and the raise that comes with being an associate head coach. keep up the great work matt!!!!!