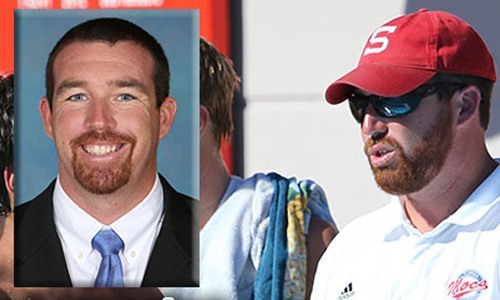 Blum, who is a central Florida native and earned his bachelor’s degree in physical education from Florida Southern in 2008, takes over for former coach Duncan Sherrard, who recently was named an assistant coach at the University of North Carolina. Blum has been serving as the program’s interim coach since Sherrard left in early June.

“We are extremely excited to have someone with the background, character and understanding of our program that Mike brings with him,” Florida Southern Director of Athletics Pete Meyer said. “He swam here, has coached here and has played a big role in our swimming program’s rise to national prominence over the past several years.”

Blum has spent a total of seven seasons over two stints as a Moccasin assistant coach. He began his first stint with his alma mater in 2007, before leaving prior to the 2010 season to become the head age group coach, assistant senior coach and aquatics coordinator for the Sarasota YMCA Sharks in Venice, Fla.

After one season with the Sarasota YMCA Sharks, Blum spent the 2011-12 season as an assistant coach at Gardner-Webb University in Bolings Springs, N.C., before returning to Lakeland and the Mocs before the beginning of the 2012-13 season.

“It’s an unbelievable opportunity I have been given to become the head men’s and women’s swim coach at Florida Southern College,” Blum said. “I would like to send out thanks to (President) Dr. Anne B. Kerr, Director of Athletics Pete Meyer and Assistant Athletic Director Drew Howard for giving me this opportunity. I am truly grateful and excited.”

In Blum’s three years since returning to Florida Southern, he has helped lead the Moccasin program to new heights as they recorded back-to-back national runner-up finishes in both 2013 and 2014 and have taken home the last three Sunshine State Conference championships for the men, while the women’s program has had two Top 10 national finishes over the last three seasons.

“I am looking forward to continuing the success this program has had the past four years,” Blum added.

During his first tour with the Mocs from 2007-10, Blum helped the Mocs send eight swimmers to the NCAA Division II National Championships in 2010, the first ones to ever make it to the championships since FSC adopted the sport in 2003. All four men and women that season ended up earning All-American honors in at least one event. The following year, the Mocs had their first first-ever Top 10 finish as a team, with the women placing seventh and men eighth.

In his seven overall seasons with the Moccasin program, Blum, who primarily coached the distance swimmers, has coached 56 Division II All-Americans, seven Division II national champions, 17 CSCAAA First-Team Scholastic All-Americans, four SSC Athletes of the Year, four FSC Athletes of the Year, one Polk County Female Collegiate Athlete of the Year, two 2013 World Championship qualifiers, one 2012 London Olympic Games qualifier and has assisted in the setting of a total of 24 men’s and women’s school records.

While at Gardner-Webb, Blum helped the program sign the most decorated recruiting class in men’s team history and was responsible for coaching the distance swimmers and the 400 individual medley. In his one season at Gardner Webb, he assisted in the coaching of six school records, a third place men’s team finish and a fourth place women’s team finish at the 2012 Coastal Collegiate Conference Championships.

During Blum’s time with the Sarasota YMCA Sharks program, his 2011 team won the Florida Swimming Junior Olympic team championship and the 2011 Short Course YMCA National Championship. He also coached several YMCA national champions and had a number of others qualify for nationals at both the junior and senior levels.

In addition to his work with the Sharks, Blum has also coached a USA Swimming age group with the New Port Richey/Tampa Bay team.

Along with assisting the Moccasin swimming program, Blum also currently serves as the head coach of the Lakeland Area Swimming program. He is the head coach of all senior level swimmers and is responsible for the day-to-day operations of the program. In his time with Lakeland Area Swimming, Blum has coached several Polk County High School Swimmers of the Year, numerous Florida High School State Swimming qualifiers, Florida Age Group qualifiers and champions, NCSA Junior National qualifiers and Florida Senior Championship qualifiers and champions. He was an area representative to the Board of Directors of Florida Swimming in 2014.

Excellent move on the part of the FSC administration, and the only one that makes any sense!

Congratulations Mike, keep those Mocs coiled and ready to strike at an NCAA Championship!

Congratulations Mike ! We wish you the best.