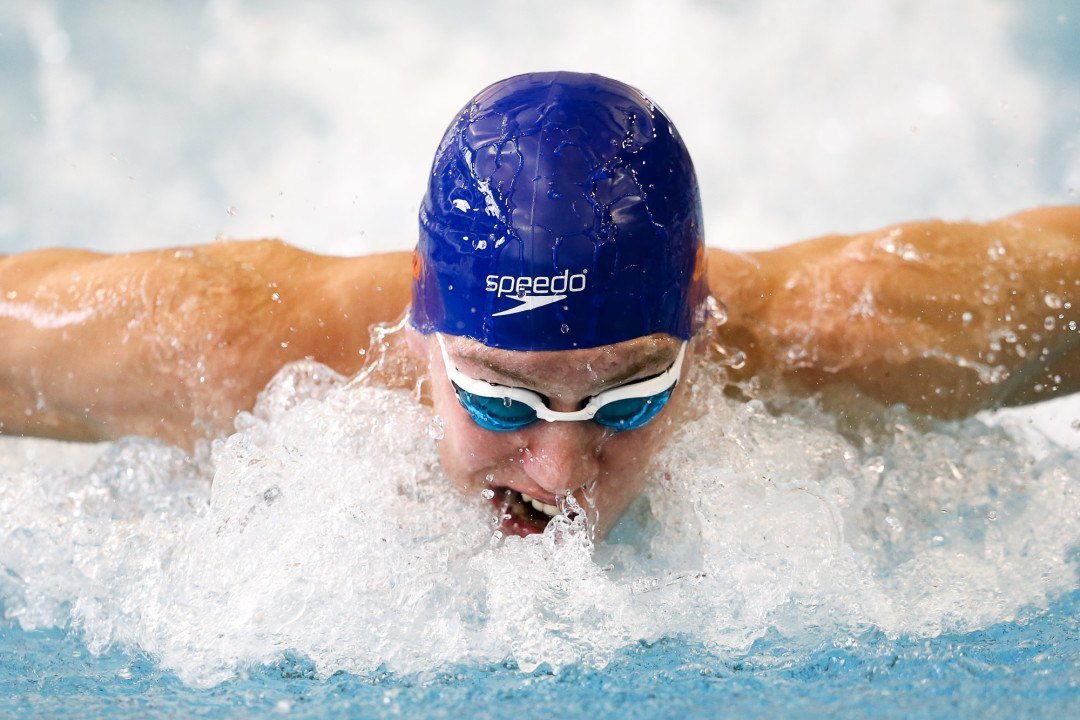 Florida's Jan Switkowski was instrumental to the win, finishing 1st in all 3 of his individual races. His time in the 200 fly is 3rd in the NCAA this year and the fastest done by an NCAA swimmer outside of the USA vs. College Challenge.

College football fans in the SEC are looking forward to the big Florida vs. Georgia game this weekend, but the rivalry kicked off today with dual meet action in the pool. The Bulldogs traveled to Florida for an SEC meet. They ended in a split, with the Florida men and Georgia women getting the job done.

Florida’s Jan Switkowski was instrumental to the win, finishing 1st in all 3 of his individual races. He was evenly matched with teammate Maxime Rooney at the halfway point of the 200 fly, but pulled away on the back half to win in 1:44.35 to Rooney’s 1:46.28. Switkowski completed the fly sweep with a 47.02 in the 100 fly and dominated the 200 IM in 1:44.99. His time in the 200 fly is 3rd in the NCAA this year and the fastest swim outside of the USA vs. College Challenge.

Sprint star Caeleb Dressel picked up a sweep of the sprint free races. He was over half a second ahead of the field in the 50 free, finishing in 19.93. Dressel darted out to the lead with a 21.01 split at the halfway mark of the 100 free, finishing off the sweep in 44.00.

Florida’s Emma Ball had an impressive swim in the 100 back. She went up against Georgia backstroker Kylie Stewart, an NCAA scorer, taking the early lead as she flipped in 25.58. Stewart wasn’t able to close the gap, with Ball posting a 52.73 to win it and become the 10th fastest swimmer in the nation this year. Stewart followed in 53.31.

Both Florida squads started the meet out on a high note, winning the 200 medley relay. The women’s relay of Emma Ball, Paige Scheriger, Sherridon Dressel and Amelia Maughan posted a time of 1:41.15 to earn the victory.

The men’s relay of Michael Taylor, Chandler Bray, Jan Switkowski and Caeleb Dresselfollowed up with a win of their own, posting a swim of 1:26.73. Florida’s 400 freestyle relay of Khader Baqlah, Maxime Rooney, Mark Szaranek and Dressel closed the meet out on a high point, winning with a time of 2:58.43.

The women recorded three individual victories to add onto their relay, beginning with Emma Ball‘s 57.73 in the 100 back. The other two wins came on the boards, with Brooke Madden winning the 1-meter (316.58) and Teya Syskakis winning the 3-meter (315.53).

Hannah Burns led the women with two B-cuts of her own, while Kelsey Dambacher, Sydney Sell and Emma Ball pitched in one apiece.

The Gators are back in action on Nov. 4 when the women compete against Florida Gulf Coast University at the Stephen C. O’Connell Center Natatorium.

How it Happened – Swimming:

How It Happened – Diving:

GAINESVILLE, Fla. — The No. 6-ranked Georgia women’s swimming and diving team remained undefeated on the season with a 182-119 victory over No. 20 Florida on Friday at the Stephen C. O’Connell Center Natatorium.

“Florida’s women kept it close at the start, and our women got together and reorganized and were able to win everything down the stretch,” said Harvey Humphries, Georgia’s Senior Associate Head Coach. “It was good to see how they reacted positively to a little adversity at the beginning of the meet. Our men raced Florida pretty closely. It was a well-contested meet. No one likes to lose, but we were proud of our guys for racing and showing up against one of the best teams in the country. No one backed down and they raced hard all the way through the meet. All in all, it was a pretty good day for Georgia.”

Georgia will return to action on Wednesday, Nov. 8, at 4 p.m. against Georgia Tech at Gabrielsen Natatorium.

Geez, they must be killing Dressel with work.

Switkowski also has the fastest 200 IM outside of the US/Pac-12 Challenge. He’s on fire right now.

Ok. Acevedo’s 100 back and 100 free splits. I have to ask about them because they’re always really even or negative split but I’ve never seen him swim in person. Does he just cruise the first 50? Does he have a really weird/bad start? I can’t imagine that’s the most effective way to swim a sprint event.

He actually has a really good start and flat out speed for 50’s as well as really good underwaters. In season he always tries to even or negative split his races and many of his best times, especially short course are swum in this kind of way. At championship meets he goes out faster in the beginning of his races but he usually comes back faster as well. It’s just how he swims and it really is crazy to watch in person. Georgia uploads videos of all their races from duel meets on youtube if you want to see his races and how he swims

Didn’t Schooling go 1:41, how is this the fastest outside of the College Challenge?

He always swims fast in practice

They have a very friendly scoreboard clock.

Schooling is the fastest for 100 fly in this season.

As JP mentioned, that was not an official meet and therefore does not count in the NCAA rankings.