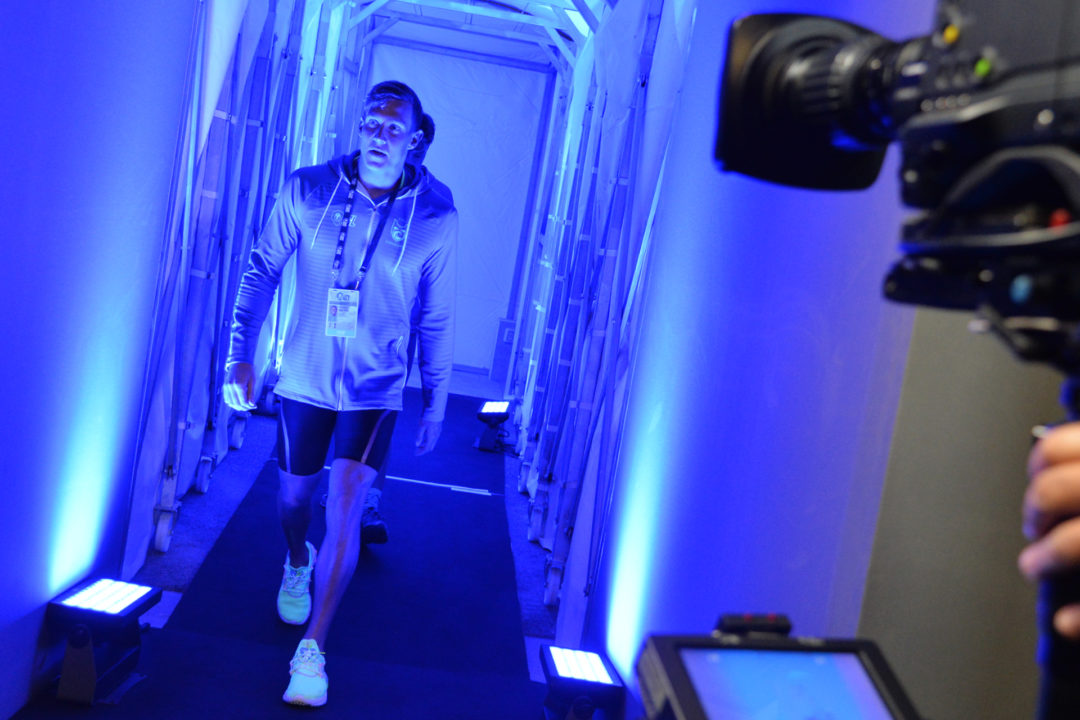 Florent Manaudou, who won the 'skins' race at the ISL meet in Indianapolis, thinks Dressel is best-suited for the event in Naples. Archive photo via LaPresse - Gian Mattia D'Alberto

Florent Manaudou, the winner of the ‘skins’ races at last weekend’s ISL meet in Indianapolis, isn’t quite so sure that he’ll win again this week in Naples.

“There is no fight with Caeleb and me, it’s just, I prefer to be in the final with Ben Proud because of the team, of course,” laughed Manaudou. I think (Dressel is) the best swimmer for the skins because he’s the fastest in the 50, fastest in the 100, he can do a lot of races in a row. Yeah, he’s the perfect swimmer to do the skins.”

Dressel beat Manaudou by .08 in the single-round 50 free earlier in the race, but as a much better 100 meter swimmer than Manaudou, he’ll have the advantage as the rounds go on.

“That was very exciting,” said the ISL ambassador and Cali Condor captain Dressel, who was making his league debut. “Just the fans, everyone crammed into one area, the light show, the music, it was great, it was fantastic.”

“Our job here is to put on a show for the people to enjoy. I think we’ve done that tonight across all four teams, but the Italian crowd was very special tonight, especially when the Centurions won races, so that was really cool.”

“It’s cool to be apart of this time with the sport, with my age, it’s just crazy,” he said. “This didn’t happen 20 years ago, it’s not 20 years in the future, it’s happening now, and it’s very special to me to be apart of that and watch this sport grow.”

“I hope it does take off so a lot of swimmers can capitalize on the talent that they do have in the pool and they can showcase that to the rest of the world. I want to do my part. Certainly for the Condors and the ISL as well. So it’s cool to see this happen in real life during my lifetime.”

“Energy Standard is a very good team,” added Dressel when asked about where his team has an advantage over them. “We’re only a couple points up after the first day, and they whooped us the first meet. Just kind of learning what spots we need to highlight in, get better in. The relays are huge, they got us tonight, but no I don’t think that’s set in stone at all with who’s going to be moving forward. It is kind of starting to turn into a rivalry and I really enjoy that.”

Dressel didn’t step too far outside of his comfort zone on day 1, though he’s show he’s capable of reaching beyond his sprint fly and free races (he’s a current or former American Record holder in both breaststroke and IM races in short course yards). After the 50 free, he finished 2nd in the 100 fly by .01 seconds behind Chad le Clos, and was also on 2 Condors relays.

Still can’t get over Proud breathing every stroke on the last round of the skins race at Indy. There are pure sprinters and then there’s Ben Proud, who apparently has only one creatine phosphate molecule available per day.

Yup, all that muscle needs oxygen.

Well Manaudou was 22.9 on the third 50 last week. That’s pretty good. It will be close.

Dont forget that Manaudou as a 45.04 from back in the day, so I don’t know who as a much better 100free scm