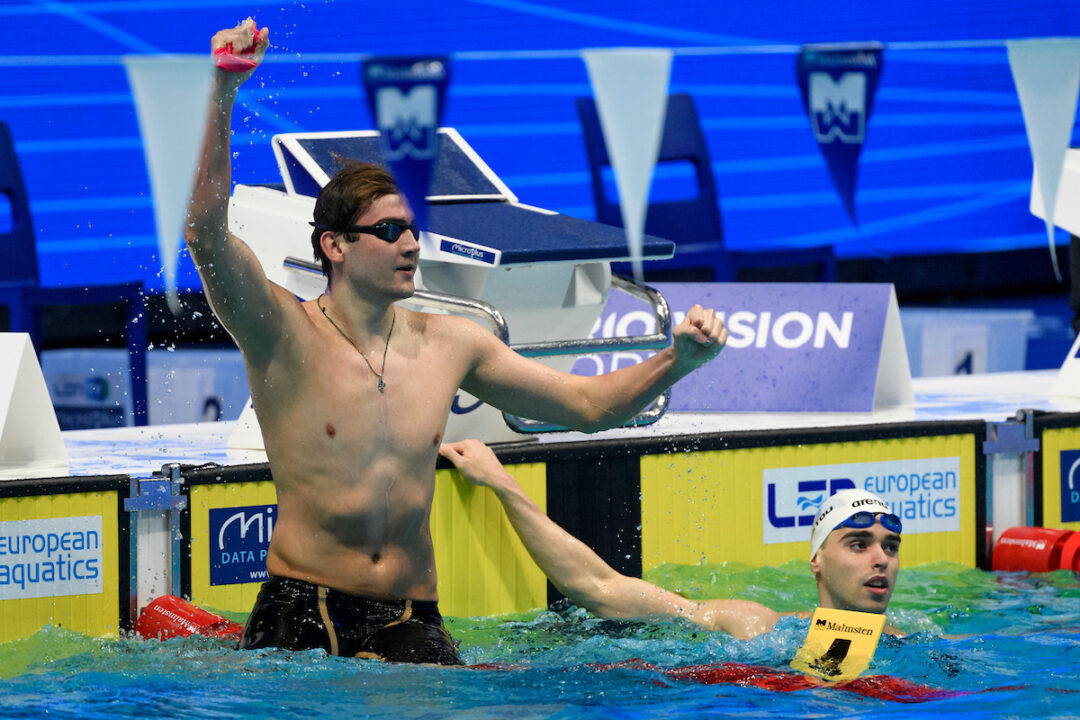 FINA, the international governing body for aquatic sports, has recently ratified a number of records broken over the last 12 months, headlined by one former world record and several World Junior Records that no longer have an asterisk attached to them.

Records set at the 2021 World Short Course Championships, European LC Championships and European SC Championships that were pending confirmation were given the green light, including Kliment Kolesnikov‘s previous world record swims in the men’s 50 backstroke (LCM).

Kolesnikov became the first swimmer to break 24 seconds in the event at the European Championships last May, clocking 23.93 in the semi-finals before blasting his way to a time of 23.80 in the final.

While those swims only earn official confirmation as of now, their place as the existing world record is no more as American Hunter Armstrong rocketed his way to a time of 23.71 less than two weeks at the U.S. Trials in Greensboro.

In the summer of 2019, FINA said it would not ratify records unless they were in compliance with FINA rules, which include seeking approval six months prior to competition and the presence of drug testers to collect samples from any record breakers.

While the world junior records in particular have generally taken long periods of time before being ratified, some of these swims also end up occurring at a competition where drug testers are absent, meaning they’ll never get FINA ratificaiton. A recent example of this would be the 4:29.12 400 IM (LCM) swim from Canada’s Summer McIntosh.

Guess someone at FINA was scrolling through old emails, panicked, then finished these by the end of the day

FINA operates with less efficiency than the NCAA, somehow

This is actually funny how late it is. Its pretty impressive that they waited so long that the record was broken.

Honestly just read the Wikipedia page. It’s accurate and has all the official WJRs as well as the actual fastest times.

Dunno if I’d trust those all the time.

For a few months a couple years ago, Dean Farris held a bunch of WRs according to Wikipedia.

(I did NOT make the edits.)

Damn this guy looks soft!! Comparing him to the likes of Dressel and Murphy, Kolesnikov doesn’t even look like an athlete… blows my mind!

Athletes come in different shapes and sizes. Cate Campbell and Emma McKeon are two of the fastest sprinters of all time and have completely different body shapes.Kyle swam his WR last year when he was 6kg heavier than he was in Tokyo, and the vast majority of that was almost certainly fat given the timeline. A six pack doesn’t necessarily mean faster swimming.

Nice speech. He still looks soft to me unfortunately

That’s fine. I’m sure he probably doesn’t care. Care to show us your body to comment on?

Marco Koch has entered the chat.

Murphy is one of the most bulky backstrokers. Why compare others to him? There are many tiny backstrokers like Irie, Xu and Rylov. Ceccon is tall but not very muscular as well.

This is one of the things I love the most about swimming. There are guys like Dressel and Flo Manaudou who perfectly fit the stereotype, then we have guys who like Jack Conger and KK who look like normal tall dudes

Honestly no point to the FINA junior WR list. Just scrap them. Not including historical swims, many of which were senior WRs at the time meant this list was always bunk.

Pretty nuts that the Thorpedo was a cool four seconds quicker than the official WJR in the 400 free. Or that the swim of a 15 year old Ian Thorpe from 24 years ago would have won the 2022 US Intentional Team Trials.

It’s not pending on FINA website so likely has been rejected. Curzan’s 50 free and 100 fly PBs were probably rejected for lack of drug testing.

True but her 56.43 swim was done at Olympic trials last summer. Did they submit the paperwork?

It’s pending on FINA website so in a year or so 🙄 it’ll probably be ratified.

I wouldn’t be surprised if McIntosh swims a half dozen swims quicker before her pending record time is ratified by FINA.

Depends on if all the paperwork was filled out and if she was drug tested after the race then maybe?

I wonder when they will ratify world records from SC worlds

This article lists 2 WJR for that meet being ratified, so hopefully, the rest will be as well.