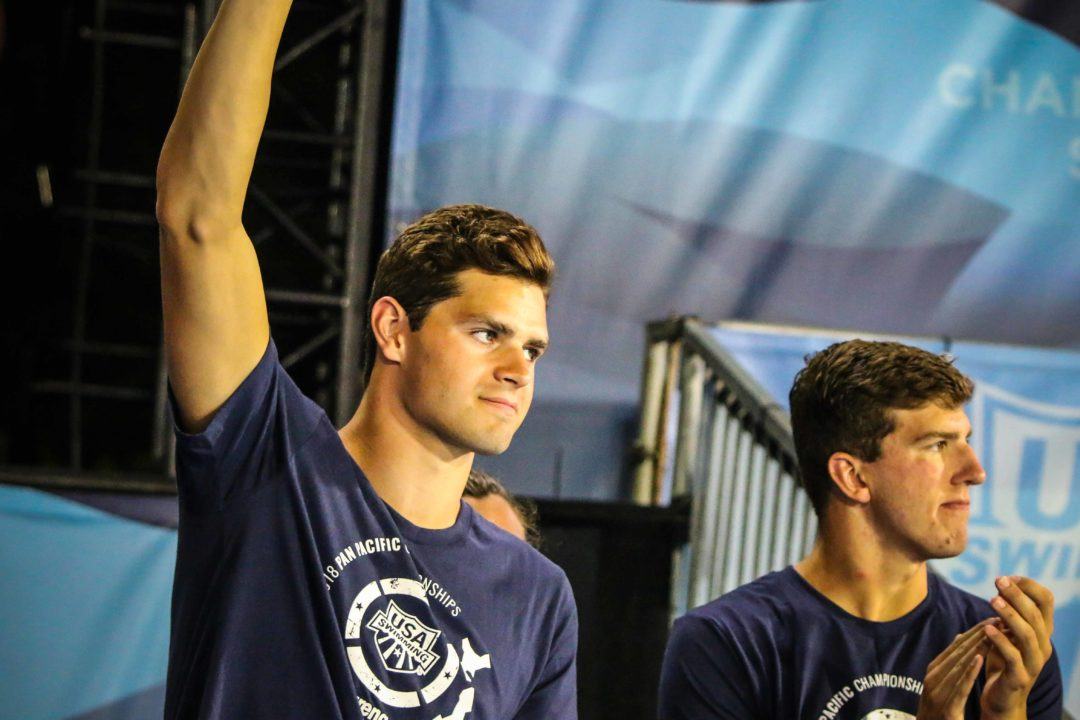 The FINA Bureau approved on Thursday in Hangzhou, China, a new series of meets called the FINA Champions Swim Series. It will include a long course, 3-leg competition between March and May that will be on an invitation-only basis, and will include a team scoring format.

The series will over $3.9 million in prize money, making it the richest swimming event in FINA history, and FINA will also cover athletes’ travel costs and provide them with appearance money. Athletes will be grouped into teams – on a continental or sponsor basis – with each team comprising 24 athletes (12 men, 12 women).

Athletes will be invited on the basis of being the World Champion, Olympic Champion, World Record holder, or the best in the world in each event.

While not specifically stated, the news series seems to be in direct response to the similar-sounding International Swimming League (ISL), which was planning a similarly-formatted series for 2019, though FINA has continued to block those efforts.

FINA said earlier this week that their focus was on the Short Course World Championships, rather than the lawsuit filed by 3 World and/or Olympic Champion swimmers on Friday over FINA’s alleged anti-competitive behaviors in blocking the ISL.

“In its constant effort for innovation and providing new opportunities for the stars of our sport, FINA is very pleased to launch this new competition. It will complete in the best possible way our swimming calendar throughout the year: firstly, this Champions Swim Series; then, our World Championships; and finally our Swimming World Cup circuit, as the year progresses”, considered FINA President Dr Julio C. Maglione. “By creating this additional elite competition, FINA will generate a true Swimming show, where sport presentation and Stars’ promotion are key concepts for a successful meet”, added Dr Maglione.

“We strongly support this new concept, as the stars of our sport are always happy to have additional opportunities to shine. We will present swimming under a new perspective, and I am sure that spectators on site, TV viewers and digital users around the world will greatly appreciate this outstanding show. Finally, with this unprecedented level of prize money, our swimming stars will definitively be attracted by this circuit”, declared Penny Heyns, Chair of the FINA Athletes Committee.

Exact dates and locations of the meet have not been revealed.

In response to the growing pressure from the ISL, including what seemed to be a tipping point with the lawsuit filed last weekend, FINA continues to address the underlying demands that have driven athletes to support the ISL. Since the ISL picked up steam this summer, FINA has announced both this new series and has doubled prize money for the Short Course World Championships. That results in at least $4 million new dollars in prize money for athletes, in addition to whatever appearance fees that are being paid (which FINA has not disclosed). This new meet is, in fact, an innovation from prior FINA series, addressing the other tail of athlete concerns, though it largely riffs off the proposed ISL format.

This new tact by FINA seems to be designed to win athletes back: especially stars like World Record holder Adam Peaty, who has become increasingly vocal in his criticism of FINA and support of the ISL over the last few weeks.

While the moves by FINA are positive in favor of the athletes, the question that will be answered in the coming months (beginning at ISL‘s summit next week) surrounds whether it’s too little, too late. While the new series does begin to address the underlying concerns for why the ISL is being created, it wouldn’t let FINA off the hook for the lawsuit – offering more money does not, in fact, correct the facts behind FINA’s anti-competitive treatment of ISL. It does, however, slot FINA in to another portion of the annual calendar. Remember that FINA has continued to say that among their primary objections to the ISL is that it interferes with FINA events. Another FINA event in a part of the year where FINA doesn’t usually hold swimming events further monopolizes the annual calendar under their working theory of conflicting schedules.

Will Olympic and World Champions (many of whom will be in the room in London) be tempted by the $4 million + available from FINA’s new series to participate? Unless there is a rider in the offered contracts that preclude participation from the ISL as a requisite for participating in FINA’s Champions Series, a number of athletes are likely to play both sides of the line: take the money that FINA is offering, but also continue to push for autonomy and greater control (which FINA has also offered this week through a new process for selecting its athletes committee).

We don’t even know yet if national federations, the support that props up FINA, will approve of these meets, as they directly conflict with home-turf events, like the USA Swimming Pro Swim Series and many nations’ Olympic and World Championship Trials meets.

FINA may have already lost the room, however; they may have played chicken too close to the edge of the cliff. For the 3 athletes who have attached their names to the lawsuit against FINA so far, Michael Andrew, Katinka Hosszu, and Tom Shields, they’ve already mustered the fortitude to risk their careers to disassemble the FINA monopoly, and are unlikely to want to push through that barrier again if FINA’s new attitude toward athletes are a short-lived appeasement rather than a long-term shift.

In 2018, there is already a natural proclivity to mistrust governing bodies of all shapes and sizes. It’s hard to see a scenario where FINA’s new series is enough to slow down the momentum of athletes’ desire to take a bigger piece of the pie in the sport. That isn’t to say that the ISL is the only end game. A strong athletes union with the willingness to push FINA to the brink of collapse of events like the World Aquatics Championships or even the Olympic Games could also prove a valiant foil to the FINA machine.

The new FINA series will only reward the absolute top of the heap. It appears that FINA predicts that it can take the head off the snake and remove much of the leverage from the opposition movement, even though the majority of World Championship and even Olympic finalists will still not benefit from the new series.

But it seems that we’ve passed a tipping point where we could expect that the ISL will go away and that athletes will happily return to their regular training and competition cycles. The athletes have heard the promises of the ISL, they’ve seen the primary invitation, they’ve salivated at the promises of the billionaire that is funding the league, and they’ve begun to come to grips with how much power they really have in the sport. With a movement that’s been generations in the making, having finally come to this big breakthrough, it’s unlikely that athletes will give up the gains that they’ve made so far. It’s not that the extra $4 million + by FINA is a token amount – it is truly a significant give by the governing body to equalize the distribution of money between administrators and competitors. A year or two earlier, and FINA’s series might have slowed the tide. But with the picture of the future painted by the ISL, the multiplier needed by FINA to pause the athletes has grown substantially – and it would need to be accompanied by some mechanism assuring its longevity. The winds of change have given too much momentum to a stronger opposing athlete force to be stopped now.

Classic monopoly at work. Drive the new competitor out and they’ll go straight back to their old ways.

FINA wants all the money. They’re so shady. Come to our meet or else is probably next. Sad.

Add one more item in the lawsuit, FINA uses ISL’s IP without permission.

After the USAG tyranny it is obvious we need to loosen the hold these sport bodies hold over athletes . Moves are growing against the USOC & then it will move on to NCAA . Why should these bodies that basically run races control ppl”s lives? These examples do not even involve governments except using state funded colleges systems.
Internationally the pursuit of Parkour has just been.annexed by FIG ( international gymnastics fed ) against their wishes.becoz Tokyo 2020 wants more street s*xy . If a group of Parkour ppl on the negotiating table disagree , they were just replaced with ppl wanting to go to the Olympics .

not enough, swimming is one of worst commercially developed sports. NFL, NBA, MLB stars earn tens of millions per year. swimmers can not even earn one tenth.

This seems like it defeats the goal of expanding swimming to become a career with suitable income for more than just the best of the best.

1. Unfortunately this just shows what they denied the athletes all theses years.
2. It won’t last and it won’t work for long. To be viable, these things need strong, happy, vibrant marketing and athletes. Now look at FINA execs and tell me if that is what you see, or if that is what they inspire.