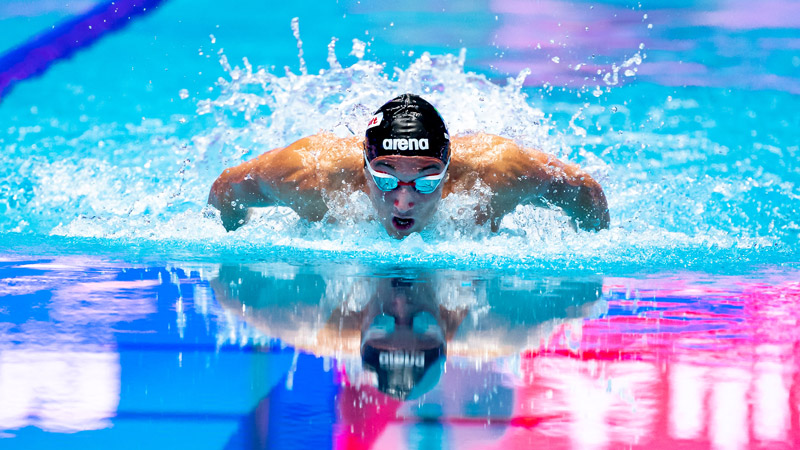 Northwestern hosted the Senior Midwest Open this weekend, giving their team and club swimmers in Illinois the chance to swim an LCM meet in the Olympic year. Archive photo via Giorgio Scala / Deepbluemedia / Insidefoto

Northwestern University hosted the long course Senior Midwest Open this weekend, giving their team and club swimmers in Illinois the chance to swim an LCM meet in the Olympic year.

The meet is “a chance for the swimmers in our LSC to swim long course,” said NU head coach Jeremy Kipp. The former Boise State head coach is in the midst of his second season leading the Wildcat program. “In Illinois, we don’t have many chances [to race LCM] outside of summer or the Pro Series meets during this time of year and as we know the TYR Pro Series can be tough sledding for inexperienced swimmers. Northwestern and NASA worked with the LSC to make this meet happen.”

NASA is the club team that trains out of Northwestern’s pool.

Wildcat freshman and Italian national record-holder Federico Burdisso raced a big this weekend, his first LCM racing since he got to campus mid-season. He posted a time of 22.81 in the 50 free, and also clocked a 24.20 in the 50 fly, winning both races. He came fairly close to his 50 free best time, a 22.72 from 2018.

Several other NU swimmers put up strong swims this weekend. Swede Hannah Brunzell and Canadian Sophie Angus dominated the 100 breast, going 1-2 with respective times of 1:08.79 and 1:08.89. Third went to Maggie Papanicholas in 1:12.02. The 14-year-old from Glenbrook Swim Club in Illinois also won the 200 breast, going 2:37.49.

Leah Hayes is a force! Can’t wait to see what she does this year.

I got to swim against him this weekend. Fun man to watch!!