Fear of Being the Best 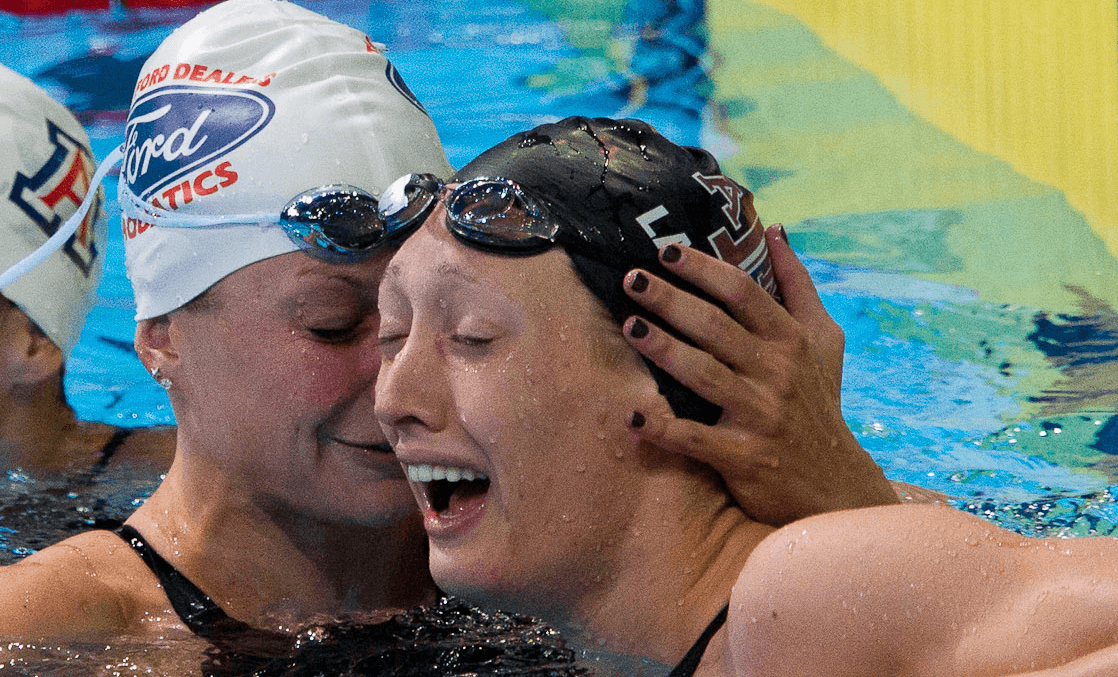 Annie Grevers: "I think it is important to be pleasant after failures. But being heartbroken when you are within a inches of grabbing that lifelong goal is also noble." Current photo via Tim Binning/TheSwimPictures.com

“I have written 11 books,” said the late Maya Angelou, who was renowned as a novelist, poet, and memoirist, “but each time, I think ‘Uh-oh. They’re going to find out now. I’ve run a game on everybody and they’re going to find me out.’” Angelou was a remarkable talent, but she was equally remarkable in being willing to admit that she didn’t usually feel that way.
-excerpt from this 99u article

This is so refreshing to read. Insecurity cozies up deep inside us all. Sometimes it hibernates for a while. But when my insecurity is roused, it roars.

I taught a private lesson yesterday and told my swimmer and her mama afterward, “I was not a great swimmer. I was a much better athlete.” The mom laughed at me. She thought I was naturally pretty good at swimming. But in my mind, I have always had that safety net to fall back on when I fail. Well, they were just more efficient swimmers than me. My power was not quite enough to win.

My dad once said he thought I did not want to believe I was capable of certain feats because it scared me. He said it far more eloquently, but I still mentally stomped my foot and pouted. How dare he say that? I am mentally strong. But he’s right about me and I bet a lot of you too. The expectations of accomplishing something big is frightening. So why put that added pressure on yourself? Why not shoot for that goal, but know in your heart you’re OK without it? It embarrasses me to admit I thought that way for a long time and still do sometimes. It seems noble to still hold your head high after failing. And it is…I’m in danger of contradicting myself. Let me be more specific.

I think it is important to be pleasant after failures. But being heartbroken when you are within a inches of grabbing that lifelong goal is also noble.

I believed I could make the Olympic Team in 2012. I really believed. I needed to have the best race of my life by over a second to qualify, but I was ready to drop a big chunk of time. I was so prepared. I trained for 730 days beyond my collegiate eligibility for one race. I had the highest expectations. But at Olympic Trials, I remember being at peace before my race. I was determined and prepared. I was meant to be swimming with the best in the world. When I touched and saw I got 5th, I did not process what happened. I feel like I had a Derek Zoolander moment. Zoolander assumed he had won Male Model of the Year, so he walked up to retrieve the award even though Hansel’s name was announced. Breeja swam next to me and made her first Olympic team. She swam the race of her life. I hugged her and celebrated her awe-inspiring performance and lived that moment vicariously through her.

As I walked down the steps to the media zone, I stood under bright lights and faced the reporters (those who were not able to nab the newly-minted Olympians). Each question hit me like a bullet. I answered with a stupid smile on my face, because if I relaxed my cheeks I thought the flood gates would open. “Was that your last 100 breaststroke ever?” Ummm, well, it was not supposed to be.

I thought about that question as I walked back to the warm-down pool where my coach and my fiance had just celebrated his herculean 100 back. Matty (Matt Grevers) swam the fastest 100 back ever swum in a non-rubber suit. A moment I was determined not to destroy for my deserving man. I sat on the side of the pool and tried to pull myself together before interrupting MG’s warm down to congratulate him. He saw me and paused. I hugged him and smiled with as much spirit as I could muster. I could see the hurt in his eyes. He hurt because I could not fully share in his joy and in the adventure we had hoped to be on together. It was bittersweet. Matt had to get drug tested, so I went to dinner with my parents, my grammy and a friend of my parents’. I remained quiet because I felt like I was in grave danger of becoming a basket case in the middle of this restaurant. I did fine until I looked at my dad. He was anguishing for his little girl. I think dad wanted to me to be an Olympian just as much as I did. I lost it. I was weeping before our meal even arrived. I’ll be honest…it was a miserable dinner.

I’m not trying to spread depression today. I have a crazy-wonderful life and got to experience London in many ways I would have missed out on had I been competing. I am actually proud of that heartbreak because of what it symbolized. I had utter confidence in my abilities. I was surprised when I did not make the team. That was masterful mental preparation.

Our deepest fear is not that we are inadequate. Our deepest fear is that we are powerful beyond measure. It is our light, not our darkness, that most frightens us. Your playing small does not serve the world. There is nothing enlightened about shrinking so that other people won’t feel insecure around you.
Marianne Williamson
Author, Lecturer

I know we’ve all heard the quote above, but I saw it in a new light today. We do know we’re capable deep down. I have sparks of extreme confidence and creativity and then my insecurity throws a wet blanket over the impending fire. It is good knowing that we’re surrounded by imposters…haha. Wait, what? No, what’s good is knowing we’re not alone in faking confidence sometimes. Matt and I always tell kids at swim clinics to smile before a race, even if it seems like the most unnatural shape to contort your face into during that shaky moment. There’s a psychological release when you smile. I don’t think it’s the actual smile, but the cause of smiling. To smile takes a shift in focus, which is a mental break from sensing those raw nerves.

God made me to swim fast and the belief I had in my own abilities was divinely inspired. Each time a brilliant idea pops to mind or a gust of confidence, I do not think that’s my own human impulse. I think the insecurity in me is human impulse and any genius that springs forth comes from above. I have a vast collection of motivational quotes, but the one below is my favorite.

For this reason I remind you to fan into flame the gift of God, which is in you through the laying on of my hands. For God did not give us a spirit of timidity, but a spirit of power, of love and of self-discipline.
2 Timothy 1:6-7

A summation: Take heart in heartbreak. Know it shows a great capacity for belief. When inspiration comes, do not let it be smothered by trivial insecurities. Instead, fan the flame and see what grows.

Annie Grevers (Chandler) is a Texan and an Arizona Wildcat. She is a former professional swimmer and NCAA Champion. A woman of faith, with a heart to love and to serve, she coaches swimming and writes with an insiders point of view and wisdom about our sport.

YOU CAN SEE HER HQ HERE.

Great post. Poignant and honest about handling those moments when our best efforts come up short of “the ideal reward”. True in swimming, true in life. Attitude and faith (and in my belief, an attitude based in your faith in God) can direct your life.

Thank you for this post. It resonates as much in life outside of sports as it does in sports.

Thank you for posting an article that highlights someone’s beliefs. Also, Annie, I’m going to try to smile before my next race – I’ve never thought of using a smile as a ‘distraction from nervousness’, so thank you.

I remember in 2004 Athens, Women’s 100 free final, before going up to the block and during the start, Jodie Henry was calm and smiling while Inge De Bruijn was giving her the death stare.