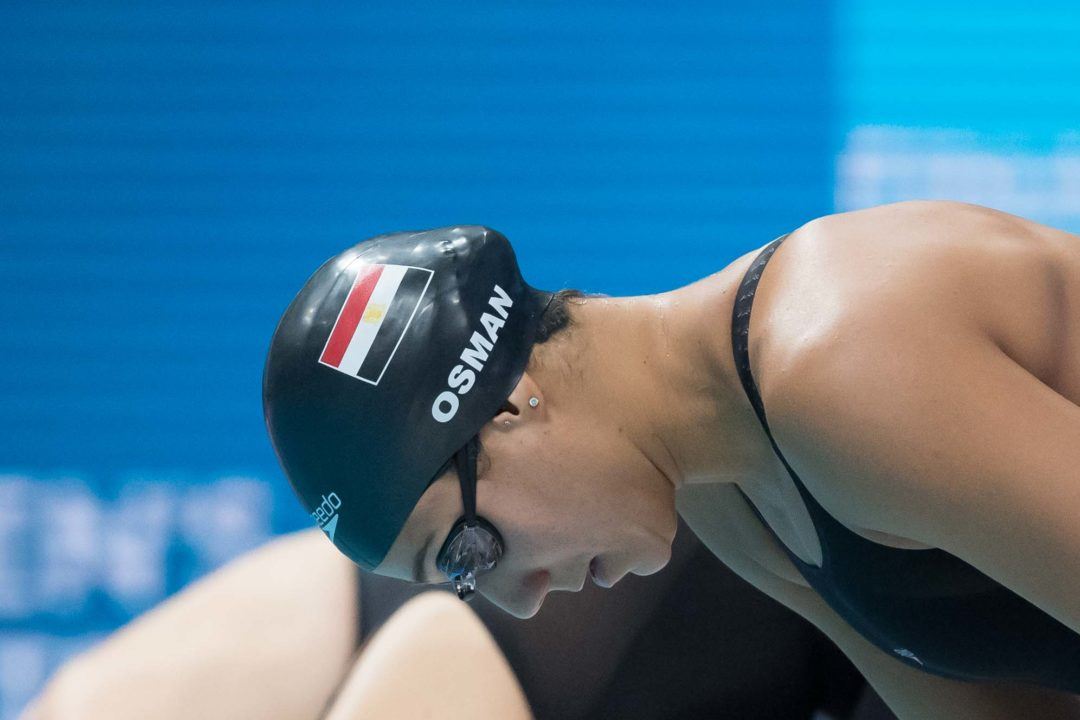 Egyptian Olympian Farida Osman has been named by Forbes as one of the Middle East's 30 most influential people under the age of 30 for the year 2020. Current photo via Mike Lewis/Ola Vista Photography

2x Olympian and Egyptian and African record-holder Farida Osman was named by Forbes as one of the Middle East’s 30 most influential people under 30 for 2020.

Forbes included the following bio of Osman on their list: “Farida Osman is a professional swimmer and has represented Egypt twice at the Olympic Games, becoming the first ever Egyptian to bag two medals at the world championships. Her driving force and motivation is breaking barriers and stereotypes in Africa and the Middle East. In the entire history of the Olympic Games only five African women have won a medal in swimming.”

Osman shared the news on her Instagram account with the caption: “Truly honored 🙌🏼 Thank you @forbesmiddleeast for featuring me alongside such inspiring group of men and women ❤️ #30under30 #Repost @forbesmiddleeast.”

A native of Indianapolis, IN, Osman graduated from Cal-Berkeley in 2017. She was an immediate contributor for the Golden Bears her freshman year, earning first-team NCAA All-America honors, thanks to her eighth place finish in the 100 butterfly at the 2013 NCAA Championships.

She was also a key contributor to Cal’s relays throughout her college career, helping the Golden Bears earn multiple podium finishes in the 200 free and 200 medley relays.

In 2017 she finished her college career with a bang, winning her first individual national title at the NCAA Championships. Her winning time of 50.05 in the 100 butterfly was the 7th-fastest time in history. It also made her just the third fastest woman in history, behind only American-record holder Kelsi Dahlia and multiple-time Olympic champion Natalie Coughlin. Osman also anchored Cal’s winning 200 free relay in an impressive 20.91, the fastest split of the field.

Internationally, Osman has represented Egypt at both the 2012 and 2016 summer Olympics. At the 2016 Olympics she set a new African record in the prelims of the 100m butterfly, finishing in 57.83. Her time was fast enough to advance her to the semifinals. She also set a new Egyptian record in the 50m free in Rio, a time of 24.91.

At the 2017 World Championships, Osman had a historic swim in her best event, the 50m butterfly, earning bronze in 25.39. She broke the African record in this event three times throughout the meet and earned Egypt’s first ever World Championships medal in swimming.

Osman also broke her own African record in the 50 free at that meet, swimming a time of 24.78 in the semifinals. She just missed qualifying for finals, finishing in 9th.

At the 2019 World Championships in Gwangju, South Korea, Osman successfully defended her bronze medal in the 50 fly, finishing less than a tenth off of her own African record.

Osman was named the African Female Swimmer of the Year by TYR in both 2016 and 2017.