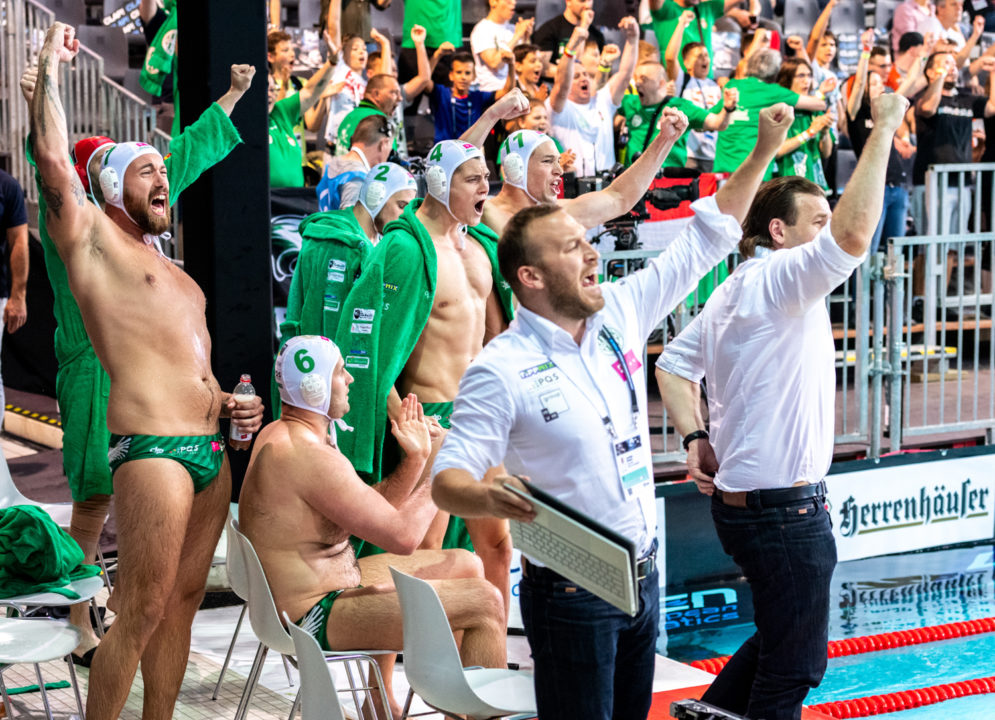 For the first time ever, the Champions League title was decided in a penalty shootout as Ferencavaros topped Olympiacos for the $52,000 euro prize.

Some facts and figures after the Final Eight in Hannover.
• For the first time ever, the Champions League title was decided in a penalty
shootout. (Just as the previous big LEN event, the men’s final of the European
Championships in Barcelona, where Serbia won by penalties against Spain.)

• Ferencvaros claimed a European trophy for the third year in a row, they clinched the Euro Cup in 2017 and 2018, and added the Champions League win yesterday.

• Ferencvaros won three shootouts this season: they beat Olympiacos both in the Super Cup final in December and in the final in Hannover and they claimed the decisive win by penalties in the Hungarian league final over OSC.

• Both the men and women teams of Olympiacos reached the final in the top
competitions, but both lost the final: the women’s team was defeated by Sabadell (ESP) in the Euro League Final Four in April.

• Ferencvaros is the second team after Pro Recco (2015) which started the season in the qualification and ended up winning the trophy. They are also the lowest ranked side in the prelims (4 th ) which made it to the top. Barceloneta finished third in 2014 before clinching the trophy.

• The Hungarians beat three former champions in Hannover: 2016 winner Jug
Dubrovnik in the quarters, 2014 winner Barceloneta in the semi-finals, 2018
champion Olympiacos in the final.

• Denes Varga claimed his second MVP title, he was also awarded in 2012 (in
Oradea he played for Primorje but lost the final to Recco).

• Konstantinos Genidounias finished the season in style: he scored 5 goals in the final and tops the overall scorers’ ranks with 42 goals. An interesting fact: in the previous two seasons the top scorer also had 42 goals: Darko Brguljan (Hannover) in 2018 and Felipe Perrone (Barceloneta) in 2017.

PRESS RELEASE
LEN PR 56/2019
• As for the other master shooters behind Genidounias: Hannover’s Aleksandar Radovic is second with 38, team-mate Darko Brugljan is tied third with Alberto Munarriz with 34 goals apiece. Jug’s Loren Fatovic was the best scorer in Hannover with 13 goals.
• Ferencvaros’s young goalie Soma Vogel produced the best saving percentage in Hannover: he had 33 saves on 55 shots for 60.0%. His father Zsolt won the trophy 25 years ago with Ujpest.
• This was the second trophy for five Ferencvaros players. Marton Vamos, Denes Varga and Aaron Younger took the first one with Szolnok in 2017, Slobodan Nikic with Recco in 2010 and Stefan Mitrovic with Partizan in 2011.

For stats and play by play action, visit len.eu or download the Champions League App!