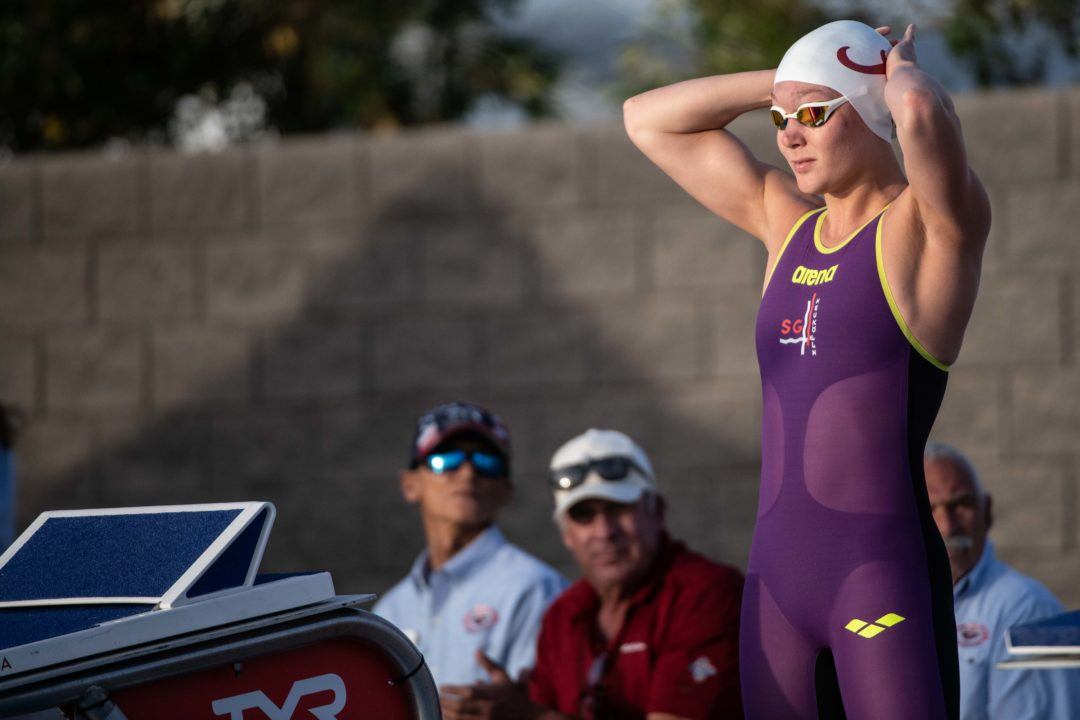 Three swimmers have been added today to Germany's squad for Tokyo 2020 Games, bringing the team up to a total of eleven. Current photo via Mike Lewis/Ola Vista Photography

On the first of 2 days of racing at the Heidelburg German Olympic qualifier, two swimmers added their names to the Olympic roster as David Thomasberger, Fabian Schwingenschlögl, and Leonie Kullmann got under the Olympic qualification standards in the 200 butterfly and 100 freestyle, respectively.

In the 200 butterfly, Thomasberger broke his own national record of 1:55.51 which he swam in the prelims with a finals swim of 1:55.04. Not only did he swim a new national record in the event twice today, but Thomasberger also got under the Olympic qualification time of 1:56.30 with both his prelims and finals swims, earning a spot on Germany’s Olympic squad this summer.

This will be Thomasberger’s first Olympic appearance and he’ll have a shot at improving upon his 20th place finish in the 200 fly at the 2019 World Championships. There, he couldn’t quite make it past the prelims with his 1:57.31.

The second Olympic qualifier on day 1 of the meet was Fabian Schwingenschlögl who hit a 58.95 in the 100 breast to get under the required mark of 59.80. The swim was also quick enough to set a new German record in the event, beating Hendrik Feldwehr’s 2009 record of 59.15. Schwingenschlögl actually got under the qualification time twice, swimming a 59.20 in the prelims.

This is also Schwingenschlögl’s first Olympic qualification and interestingly, he, like Thomasberger placed 20th in his event at 2019 Worlds. Two years ago Schwingenschlögl swam the 100 breast in Gwangju and posted a 1:00.12 prelim swim for 20th.

The swim for Schwingenschlögl makes him the 6th fastest 100 breaststroker worldwide this season.

Leonie Kullmann raced to victory in the 400 freestyle by swimming a 4:07.44, just out-swimming the Olympic standard in the event of 4:07.50, allowing her to make her first-ever Olympic team by just 0.06 seconds.

David Thomasberger and Fabian Schwingenschlögl and Leonie Kullmann‘s addition to the roster make it a 11-strong team thus far:

Annika Bruhn was even closer in the women’s 100 freestyle, swimming a 55.00 for the gold medal to get within a second of the 54.10 it would take to make the team. Like Diener, Bruhn was also faster during the prelims, having hit a 54.51 during the morning session.

Timo Sorgius won the 100 freestyle event for the men with a swim of 51.10. Notably, Josha Salchow and Marek Ulrich were absent from the final, having tied for top seed in the prelims by both swimming a 50.06. All three of them trailed the Olympic cut of 48.50.

Great swim Fabian!
Seems Diener won’t quite hit the heights once thought. Been stagnant for a few years.

Sadly this is probably true, he always was much better short course. I think he isn’t among the tallest guys in backstroke, so this might be a bit of a disadvantage for him.

I don’t think it’s really that difficult of a name to say. If you hear it once, it’s pretty comfortable to repeat.

Chris Hindmarch-Watson from 🇨🇦 will nail it no prob!

Every German, Austrian, Swiss, Luxembourgish, Dutch and Danish announcer would win that medal then. It’s just the ö that’s tricky for English native speakers… but it’s not a very hard name to pronounce.

13
-1
Reply
There's no doubt that he's tightening up

Man I still remember when Kitajima crushed a 58.91 and how special it seemed.

This is becoming a big question for the Americans to answer at Trials: do they have a 58? Seems like every other major swimming nation is finding one.

On paper the talent is there.

What’s crazy is 2016 was the first trials that it took sub-minute to make the team! Realistically, it will probably “only” take 59 low to make it this year, BUT it wouldn’t be crazy if third place went a 58 with MA, Wilson, and Miller (and others) competing. And even IF third place went 58.9, it would still be a very weak event for the US, since 1 and 2 arent going 58 mid-low.

I think the US has easily 3 or 4 guys who could do it, the question is if they could do it without too many dolphin kicks. I am sure that Peaty doesn’t have to use an illegal technique to go sub 59, but i am not sure about everyone else.

Here is a personal “summary” for people who don’t follow german swimming:

Athletes who could qualify today in my opinion (if they are at their best, thanks to COVID it is impossible to say what everyone is capable of these days*):
Men’s 50 free: Artem Selin (his 100 free yesterday didn’t look encouraging, but let’s see)
Men’s 100 back: Ole Braunschweig
Men’s 200 breast: Maximilian Pilger
Women’s 50 free: Jessica Felsner
Women’s 800 free: Celine Rieder
Women’s 200 breast: Kim Emily Herkle
Women’s 100 fly: Angelina Köhler

Athletes who competed yesterday and didn’t manage to qualify, but might still qualify later on (in my opinion*):
Men’s 200 fly: Ramon Klenz
Men’s… Read more »

Two additions:
1) I am not sure if Kullmann is already “safe”. I think Gose is almost certain to swim faster than her and if any other woman does it, she is out.
2) Zoe Vogelmann (born in 2003) swam an age group record of 2:12.12 and almost made the qualification mark of 2:11.90. She might try to get there at one of the other meetings in the next two weeks. Her old PB was 2:12.97 from last month.

Schwingen his schogl better then ever.