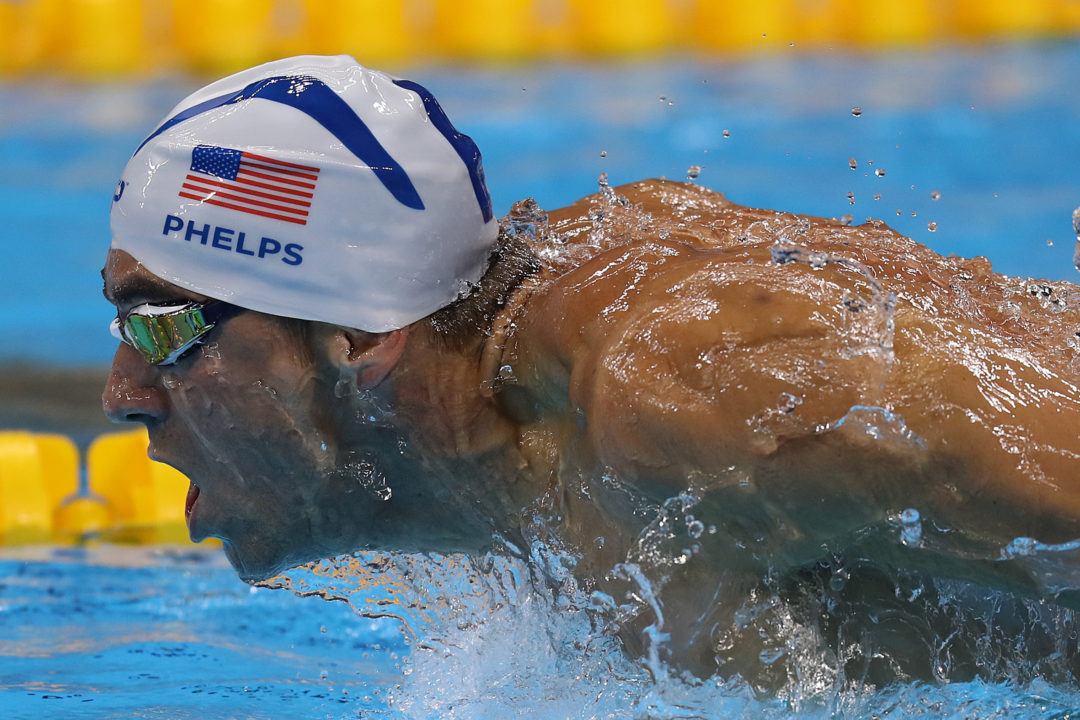 Phelps, anchoring the American 4×200 free relay, stepped to the blocks to put his swim cap on as longtime teammate Ryan Lochte swam the third leg. But there was a twist: as Phelps stretched the cap over his head, it ripped.

NBC commentators noticed the equipment issue as Lochte was holding the American lead with less than 100 meters until he would pass off the relay to Phelps. Phelps, already dealing with the second half of a tough 200 fly/200 free double at age 31, calmly dropped his ripped cap and grabbed the cap of Dwyer, who was still recovering from swimming the relay’s opening leg.

If Phelps looked like he’d “been there, done that” before, it’s because he has. The most decorated Olympian of all-time flipped Dwyer’s cap inside out to hide Dwyer’s name, then jumped in the pool to put the U.S. victory on ice.

You can see the whole proceeding in this gif, courtesy of FlipTheTables on Reddit:

Phelps split 1:45.26 on that leg, helping Dwyer, Lochte, Townley Haas and the U.S. win the relay it has historically dominated. The win counts as Phelps’ 21st gold medal off all-time, an insane all-sport Olympic record that doesn’t appear in jeopardy of being broken anytime soon.

Phelps had just won gold #20 earlier in the night, toughing out a win against a brutal 200 fly field.

(Side Note: Commentators on the Canadian broadcast, perhaps not realizing Phelps’ own cap had shredded, brought up the question of sponsorship, noting that Phelps’ sponsors might not be happy he turned the cap inside out, hiding its logos. Phelps, of course, is essentially his own sponsor with AquaSphere’s MP brand, so that wasn’t a major issue.

On the other hand, Phelps turning the cap inside out may have been a quickfire business decision: most of the U.S. Olympic team have been wearing caps and suits of various brands, based on each athlete’s preferences and sponsorships. Dwyer’s cap very well could have borne the logo of a rival company, and Phelps may have actually made AquaSphere very happy by not swimming a highly-publicized race under another company’s logo.)

Swimswam is acting like it was no big deal. First of all, it was like 40 meters till he had to go, not 100. Second, you could see he was tense.

Congrats to the USA team

This is the mark of a true champion. Not even something this terrible could faze him.

Hide the name, or hide the speedo logo? Hope it was the former not the latter. Awesome calm to get it on, sad not to see a flag on it at the finish.

You’re not allowed to swim with someone else’s name on your cap. Can get you dqed

I’m pretty sure that’s not actually a rule.

It hasn’t been an issue at the pro swim series

Under USA Swim rules, your are absolutely right! You are not allowed to swim with some one else’s name or some other team’s name on the cap. I thought, “Ah ha! We’ve told swimmers about this and here it is!”

had an additional five+ minutes to wait until his leg of the race…. pretty common not to have the cap and goggles on with that much time to wait….