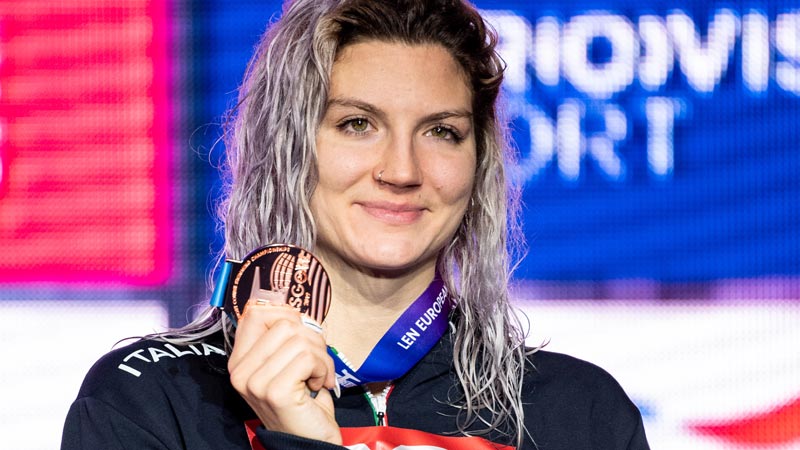 The Italian IMer Ilaria Cusinato published a letter about reasons that led her to leave the Federal Center of Ostia (Rome) in the summer of 2019. Current photo via Giorgio Scala - Deepbluemedia

Tai, who competes in the SB8, SM8 and S8 categories, is a champion at Paralympic, World, European and Commonwealth level.

The reopening of venues will see a return to club training for U18’s sooner than adults who will have to wait an extra 5 weeks (pictured: Luke Greenbank)

The Italian IMer Ilaria Cusinato has written a long letter about reasons that led her to leave the Federal Center of Ostia (Rome) last summer. She first shared the letter on theowlpost.it, an Italian site where athletes publish their own first hand narratives

Ilaria speaks about the issue of eating disorders and her difficulty in asking for help while at the Center.

The Ostia federal training center in Rome is one of about a dozen or so in Italy, and along with Verona is one of the two most important for swimming. Cusinato was the last female swimmer of her caliber to come through Ostia; the center is now home to the group of coach Stefano Morini, who is the former coach of Olympic gold medalist Gregorio Paltrinieri. Among those in his current group include Gabriele Detti and Marco de Tullio.

These centers are like small athletics campuses, where athletes live, train, and dine in the same facility.

In her letter, Cusinato writes about an eating disorder that she developed at age 16 while training in Rome that included a cycle of binging and purging.

“I arrived at the Federal Center of Ostia (Rome) when I was only 16, with a lot of energy in my body. “She never stops,” people thought. My first, true, high-level training was traumatic. We were in Flagstaff, Arizona, for a period of altitude training. All the other athletes were long-distance swimmers, but at that age it is difficult to grasp those little details, and it is much easier to get carried away by the context.

Among them I saw myself fat, I felt fat. I was fat. A joke, a comment, the others’ laughter. They all seemed to me so self-aware, so adult, in their behaviors and attitudes. I was so young, and I felt lost.

From that moment, two very long years of serious eating disorders began, which hurt me, which put me in front of a huge mountain to climb the highest of all: asking for help.

It happened two or three times a day that I over-stuffed myself with food. The food made me feel full. Satisfied. Then I forced myself to throw up. 2018 was my worst year and my best season. I remember when, on the pool deck people said: “Ilaria, you are in great shape!” I was wearing myself out but I was overjoyed by those words. My body had reached a balance of its own. Made of deprivations and excesses, yet the whole thing was, miraculously, still standing.

Ilaria finished her letter with a thought about her present, and future.

“Nobody knew. Almost no one. I am stubborn,and getting help was not an option for me. Even my beloved parents didn’t know a thing. Until a person, whom I had allowed to get close, called my sister and broke the wall.

Like a collapsing dam, I told everything in a river of words and went home. The Bronze at the European Championships is not a big deal, but for me it’s worth what a new start is worth. Imperfect and full of excitement.”

The 20-year old Cusinato does not name names in her letter. In 2018, which she referred to as her “worst year but her best season,” she won a pair of European Championship silver medals in the 200 IM and 400 IM while training at the Federal Center in Ostia.

Shortly thereafter, she left the center to train with American-Hungarian coach Shane Tusup. Tusup is best known as the former coach and husband of another of the world’s elite IMers: World Record holder Katinka Hosszu.

As part of the journey, the pair were producing a YouTube series called “Olympic Dark Horse,” which featured the assembly of a small training group under Tusup’s tutelage in Italy, with Cusinato as the centerpiece.

Begun in the summer of 2019, that partnership was short-lived: after only 3 months, the pair separated after conflict between Tusup and Cusinato’s boyfriend, David Foldhazi.

In 2019, after the split, Cusinato won a bronze medal in short course at the European Championships in the 400 IM. She is now training in Padova with coach Moreno Daga.

Thank you for opening up. Eating disorders aren’t talked about a lot, especially in the swimming world, but you never know what people are going through. It’s amazing that she could achieve the success she did in her “worst year.”

Completely agree – imagine our young athletes in the locker rooms, struggling to get these tech suits on. No wonder so many female athletes leave the sport when their body starts changing.

It’s important for everyone out there to empathize and for those who feel the same to know they’re not alone and there’s plenty of help out there.

Kudos to her. I hope she gets all the support she needs to overcome this.