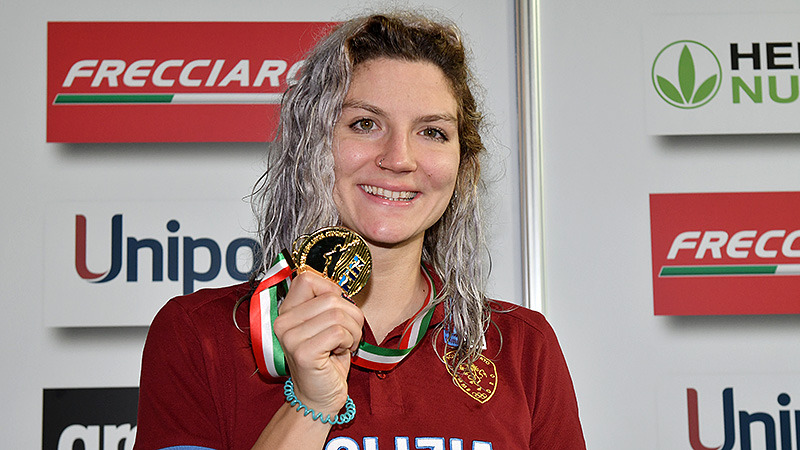 Ilaria Cusinato has found a new coach and, she says, is learning about 'tranquility' in her life. Archive photo via Andrea Staccioli / Deepbluemedia / Insidefoto

While racing at this week’s Italian Championships, Italian IMer Ilaria Cusinato spoke with SwimSwam’s Giusy Cisale about her season and her departure from her short-lived collaboration with coach Shane Tusup.

“For me, it wasn’t an end of something, but I would say a new beginning, because I found a new ‘me’ and a new way of living my life,” Cusinato said. “Not only my swimming life, but also my personal life. I found an amazing person who is now living with me and I’m so proud of the work we have achieved together, and what we have worked on. So now I’m living a good life. I’m very happy for what I’m doing now.”

The ‘amazing person’ that she’s referring to is Dàvid Foldhàzi, a Hungarian swimmer, who was briefly a part of Tusup’s training group in Italy, along with Cusinato. While the exact timeline of events is still murky, according to Tusup the 24-year old Foldhàzi “broke team rules” and was asked to leave the group, while Tusup said that he would welcome Cusinato back.

Cusinato did not go back, however, and is instead now training in Padova with coach Moreno Daga. Daga is not a huge name in international coaching, but he counts among his trainees Matteo Furlan: the 2013 World University Games champion in the 10km open water swim and the 2018 European bronze medalist in the 25km open water swim.

“So now I’ve started a new preparation with my new coach Moreno Daga in Padova. I’m very happy to be working with him because I’m very connected with him, because he’s not only a good coach, he’s like a father to me. He’s very protective, I’m learning a lot from him because he’s teaching me how to live a proper life not only in my swimming career but outside and how to live my days with more tranquility and in a peaceful way. He’s teaching me a lot and I’m very, very happy with my choice and I really hope that this year will be a very good year for me.”

Tusup is most famous as the former coach and husband of Olympic Champion and World Record holder Katinka Hosszu. The two had a romantic and professional split in early 2018, and Tusup spent a year away from the sport attempting to build a career as a professional golf long-driver.

But in August, Tusup and Cusinato announced a new project where Tusup would train the then-19-year old, now 20-year old, Cusinato toward Tokyo. Ultimately that project added a few more swimmers, but Cusinato’s involvement lasted only a few months. The training was documented via a YouTube series called “Olympic Dark Horse,” which has only seen one new episode since the split with Cusinato: a video introducing Tusup’s girlfriend, Courtney, to the channel.

The partnership drew special interest because Cusinato specializes in the IM races: the same events that Tusup’s former wife and trainee Katinka Hosszu specializes in.

Cusinato won silver in the 200 IM and 400 IM in long course at the 2018 European Championships and most recently took a bronze medal in the 400 IM at the European Short Course Swimming Championships.

Cusinato also won the 400 IM (4:41.04 in long course) in her only swim at the Italian Championships this week – 5 seconds away from the Italian prequalification standard for the Tokyo Olympics.

Reminds me of high school / college when a talented girl goes off the rails to chase a boy. She might be saying that she’s more dedicated than ever, but that’s not what it looks like.

This is Ilaria’s biggest mistake to date. Shane would have coached her to an Olympic gold medal possibly multiple and she gave it up for a guy who will get tired of her within a year. What I noticed consistently in Olympic Dark Horse was Shane constantly having to remind Ilaria why he is there and what her goals are. She should not have to be reminded even once what the goal is. Shane is one of the most motivational coaches I have ever witnessed. All this hate/slander is inevitable once you are at the level he is at. His success will forever perpetuate hate, especially right here in the SwimSwam comments.

She made the right move to dump Tusup.

It’s kind of sounded to me like she got a boyfriend and isn’t as motivated to work with Shane and play along with his whatever he’s doing than she was trying to get away from a “toxic environment”. This comes from someone who hate watched all of the dark horse videos and his long drive career

Aside from the gym stuff I didn’t really see a problem. Shanes conduct (as presented in his videos to be fair) was pretty typical of coaches of open programs. Obviously we don’t know how he acted off camera.

There will be an interesting LC battle this week in Győr between new Dark Horse Szilágyi and Jakabos on 200 fly. Either of them were posting a good time would put her in advantage for the Tokio ticket. Szilágyi said she has found what she were searching for in recent years in Tusup. We shall see. Captain Sós did not put her in the ESCC team (she said, that was because her trainer’s name is Tusup) adding another flavour to the battle.

Glad she got away from Tussup’s dryland/weight program cause that was an injury waiting to happen. Her future outlook is probably to be on the fringe of being relevant. So I think she can podium with weak competition like at a Fina world cup but I dont think she is in the conversation at major international meets.

Have there been any more of those YouTube “episodes” since the break-up? Is Shane coaching anybody else and “Real World-ing” it? Or is it all over? Will there be more? Did I leave the iron on?

To quote the great Jiminy Glick: “I have so many questions, yet….. part of me just isn’t that interested…”

Then why did you click on the article, Ol’ Longhorn

Because, according to Ray Looze, I have an extra quadrant, and that one IS interested.

What a recovery after getting roasted

“I’m learning a lot from him because he’s teaching me how to live a proper life not only in my swimming career but outside and how to live my days with more tranquility and in a peaceful way.” Yeah, she definitely wasn’t learning how to live a peaceful life from Shane. It sounds like she found a good fit.

While she refrains from saying anything bad (or good) about her time with Tusup, the way she phrased that sure seems to imply she was fleeing a toxic environment. Sure looked like it in the couple “Dark horse” videos I saw. Glad she realized it in time to preserve her mental & emotional health. I just hope it’s not too late to salvage her Olympics qualifying bid.