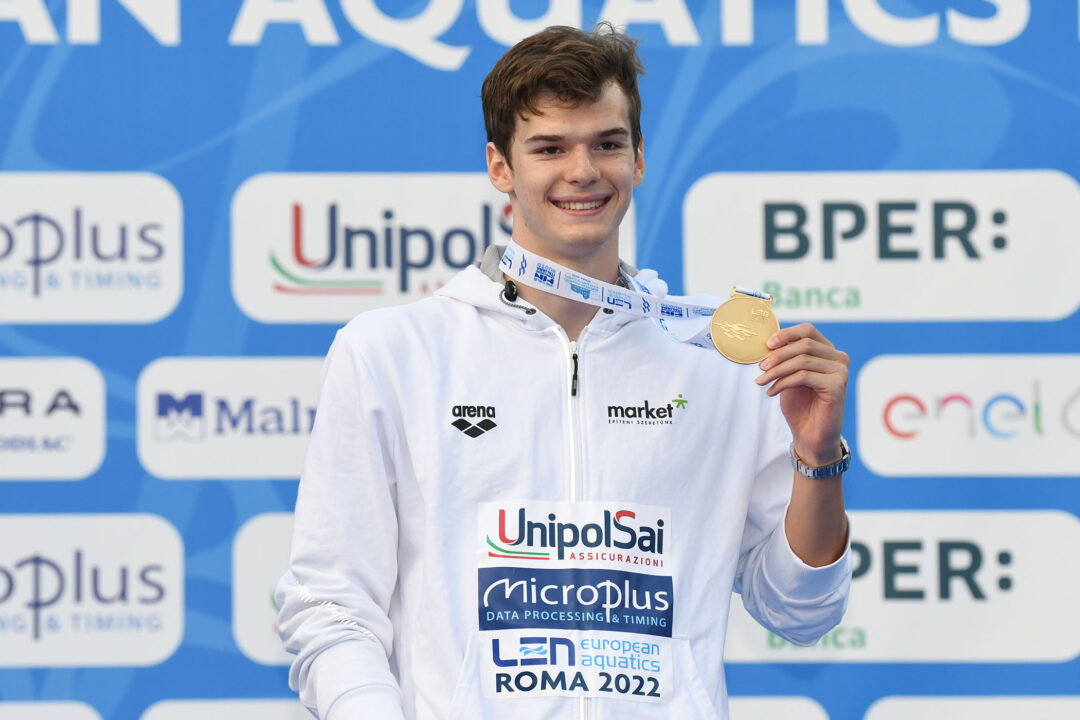 The lanes in Tempe, Arizona have gotten a little more crowded, with another international champion diving into Bob Bowman’s growing group of elites.

The 19-year-old plans to enroll as a freshman for the spring 2023 semester after he secures his I-20 form, a U.S. visa issued by educational institutions. As a Sun Devil, Kos should be surrounded by talented IMers from the top down.

The commitment comes after Kos took home his first major international gold medal at the European Championships earlier this month, edging Italy’s Alberto Razzetti by one-tenth of a second in the 200 IM final. His winning time of 1:57.72 was about a half-second shy of his season-best 1:57.23 from Worlds and just under a second slower than his lifetime-best 1:56.99 from last year’s Euros semifinals. The latter mark still stands as the world junior record today.

Kos’ best converted times (from long-course meters to short-course yards) would have already placed him in the NCAA Championship final of the 200 IM (just half a second behind third-place finisher Luca Urlando), 400 IM, 200 back, and 100 fly. His best converted 200 fly time would have put him in the consolation final at NCAAs.

We have two different converters that we use in these articles.

At this pace ASU will run out of pool space soon

Coach Bowman will keep everyone guessing until the commitment is “signed sealed and labeled”!

I think he’s half Irish, if that changes the visa stuff

He is from his father’s side.

It’s probably another year or two and a few more blue-chip recruits before we start entertaining the idea of ASU contending for a national championship. But, the foundation is definitely in place.

Many people probably saw the report that Sates is trying to come back to the NCAA. While I’m skeptical of it happening since I doubt he could get through the clearinghouse, ASU and Bowman would be an excellent fit for him.

Do you have a link to this report please?

I too want to know

Sorry, I probably should’ve said “rumor”, not report. Kyle Sockwell tweeted about it, and pretty much every “insider” scoop he’s put out recently has proven to be true so take from it what you will. From what I know he’s reached out to multiple teams, but there still remains the issue of the nature of the endorsement deals he signed after leaving college this spring, as well as his academic performance (or lack thereof) during his time at Georgia.

I think it’s a long shot that he’ll be able to recover his eligibility, but in the age of NIL, anything seems possible.

I saw a previous comment that he’s going to Cal.

Kharun gonna be at ASU in a year

you mean being the fastest in that tiny spec of a swim scene called Europe?

Yes, although Bowman is still building. In a few years, I believe the gap will close. Swimmers/recruits taking notice of one of the best pro-groups in the world. This year, Top 5 at NCAAs.

So he’s actually joining the collegiate team not the pros correct?

Apparently yes as he is only 19 years old and ASU is getting his student visa oked. ASU has a long history of developing and supporting Hungarian students back to to the time of Atilla Czane and more recently Anna Olasz, a Hungarian national team distance swimmer, who graduated from ASU recently

I don’t hope for him and Hungary that his stay at ASU will have the same negative impact as it did to Agnes Kovacs – she may have received a degree, followed up last year by a ph.d. in her home country but her swimming career completely died at ASU under Michael Chasson.

Bowman is not Chassen. Chassen killed her career and took down the entire men’s program while he was at it.

Let’s hop that. Kovacs’s stay at ASU is still the horror example why Hungarian swimmers should not go to the US in Hungary.

You want a list of whose career turned around for the better after landing a US scholarship? I am not sure the character limit will allow it.

Anna Olasz who swam at ASU under Bowman is doing well in international swimming. While long past competition swimming age at 79, I have been observing ASU swimming and swimmers for over 22 years and only ASU coach I know of that comes even close to Bob Bowman is Ron Johnson.

I agree but that wasn’t the statement.

And Borodin, but he is never gonna leave Russia for sure.

he’s not too far away from going 50. his best time is 51.3 almost mixed him up with Bulgarian teen flyer Josif Mailadinov.