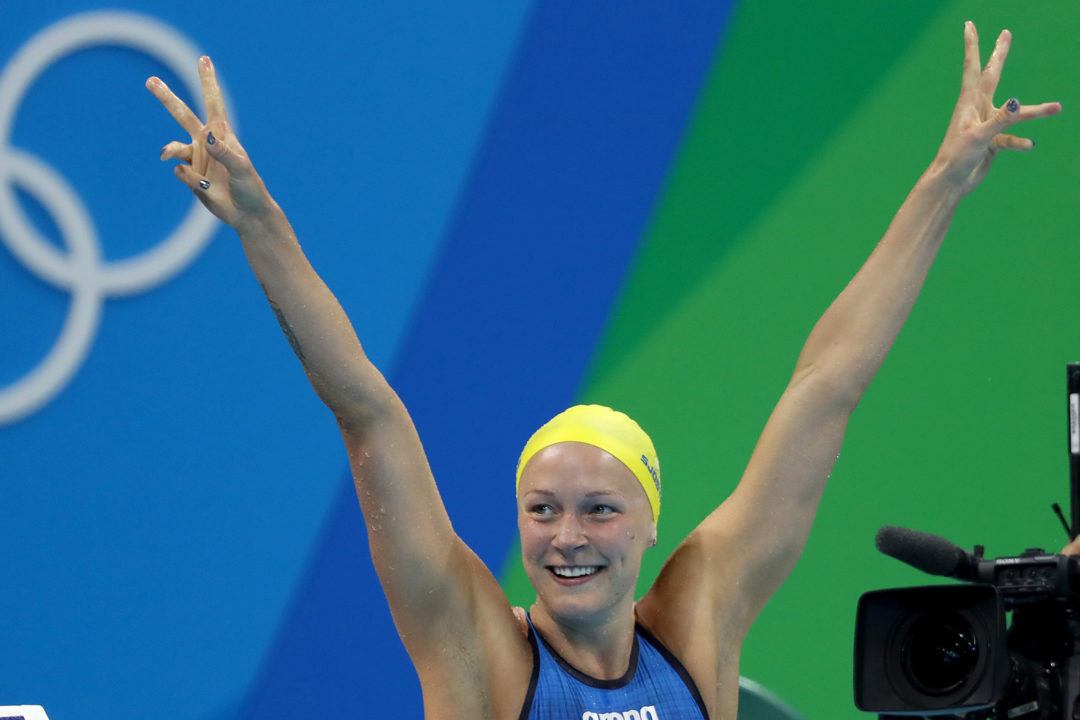 After having great success in the 100 butterfly as well as the 100 and 200 freestyle Sarah Sjostrom of Sweden finished 13th in the 50 freestyle... Current photo via Simone Castrovillari

On the second night of competition we outlined Swedish star Sarah Sjostrom’s long road to Olympic gold, on Friday evening she was looking to overcome another challenge. At the 2012 Olympics in London Sjostrom took on an ambitious schedule of individual events swimming the 50, 100 and 200 freestyle as well as the 100 butterfly as well as the 4 x 100 freestyle relay. In Rio she took on a similar schedule with the addition of the 4 x 100 and 4 x 200 freestyle relay.

Although her overall results were much better in Rio it appears she ran out of steam tonight as she missed the final in the 50 freestyle finishing 13th.

Going into the final day of competition in Rio she has placed:

After making her breakthrough in the 100 butterfly on Monday evening Sjostrom seemed to be swimming relaxed and enjoying the every moment. In fact after she took bronze in the 100 freestyle she wished she had been in the stands watching the race, “That’s the most exciting finish I have been involved in,” said Sjostrom. “So now I wish I had been watching it from the stands. I was very surprised to have taken a medal with that time I did. I have swum faster this year but I am still very happy.”

Although the Swede is swimming with a more care free attitude she expressed the toll her schedule was taking on her, “I feel very tired after six days,” Sjostrom said after her 100 freestyle. “It felt great for the first three days, but after six days I got really tired. I didn’t feel very great today before the race. I was sleeping the whole day. I didn’t feel 100%.”

Although Sjostrom has been building towards doing this schedule for the last four years, swimming similar events at both the 2013 and 2015 World Championships it appears that she does not have a lot left in the tank.

This was the first time (I think) that she swam both 200 free (3 rounds) and 4*200 (2 rounds). It was sad to see her waste her energy in the relay prelims with two in the team out of shape. I hope in the future she will concentrate on her own races until Sweden have five decent freestylers so she can skip the prelims.