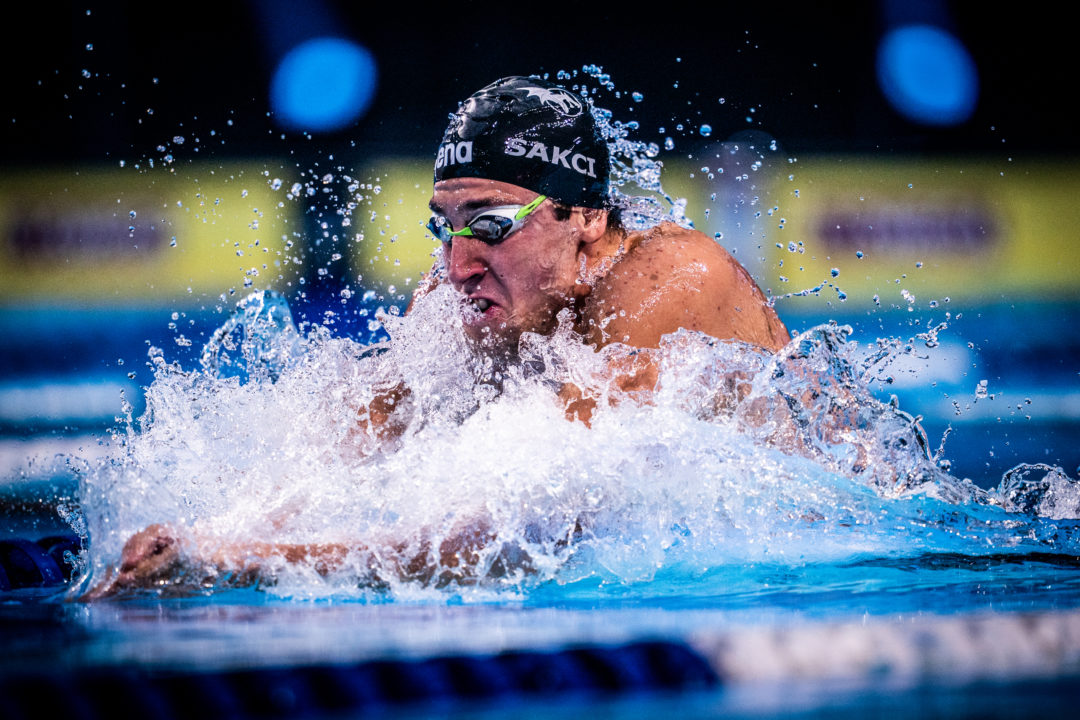 In addition to his 50 breaststroke world record at Turkish Championships, Sakci broke his own national record in the 100 freestyle with a 46.68. Archive photo via Mine Kasapoglu

We reported earlier on Emre Sakci‘s world record-breaking swim at the 2021 Turkish Championships. Sakci won the 50 breast in a 24.95 to become the first man under 25 seconds in the event.

Sakci hasn’t limited his success to the breaststroke events, however, having swum a national record-breaking swim of 46.63 during his leadoff on the 4×100 freestyle relay. That was an improvement upon his own national record of 46.68 from 2018. He also swam to victory in the individual 100 freestyle with a 46.75.

A number of other national record holders and Olympians are in the pool this week as well.

The Turkish freestyle trio of Merve Tuncel, Deniz Ertan, and Beril Bocekler have taken the freestyle by storm at this meet. Ertan won the women’s 200 freestyle in a 1:57.97, shaving nearly a second off her own PB from just days before at the 2021 World Championships. There she swam a 1:58.90 during a 4×200 freestyle relay leadoff.

Merve Tuncel and Beril Bocekler went 1-2 in the 400 freestyle as they raced to the very last stroke, hitting a 4:08.71 and 4:08.89, respectively. Tuncel set the Turkish record in that event at a 4:02.47 earlier this year at the European Championships in Kazan.

200 freestyle victor Ertan also collected a gold medal in the women’s 800 freestyle with an 8:20.16. That got her within striking distance of Tuncel’s national record in that event of 8:17.12, which is also from European Champs this fall. Tuncel was second to Ertan with an 8:25.48 while Bocekler touched in 3rd with an 8:34.94.

In the men’s 200 freestyle final national record-holder Baturalp Unlu came out on top with a 1:45.11, slightly trailing his NR of 1:43.35 from last year’s Turkish Championships. He also raced the 400 freestyle and finished second overall to victor Yigit Aslan. Aslan won with a 3:43.87, which was enough to beat Unlu’s 3:44.16 and Mert Kilavuz rounded out the podium in a 3:45.96.

All three of them were a bit slower than Unlu’s Turkish record in the event, which he also set at this meet last year, of 3:42.36.

400 freestyle bronze medalist Mert Kilavuz was the fastest man in the 1500 freestyle with a 14:56.97. He was the only sub-15 minute swimmer in the field but trailed his own PB and Turkish record of 14:39.76 from just last week at the 2021 World Championships.

Ekaterina Avramova pulled off a successful sweep in the women’s backstroke events, posting the top times in the 50, 100, and 200. In the 50 backstroke, she won with a 27.02, which was only 0.04 seconds faster than silver medalist Serzin Eligul. That win for Avramova was actually the 3rd time she broke the record this month.

Check back in tomorrow, December 28th, for a recap of the 5th and final day of racing at Turkish Championships.

Guys I think he actually just mis-timed his taper

He did more than one dolphin kick in this race he should be disqualified 🤡🤡🤡 you clowns.

His arms are completely out of the water

That’s how you do freestyle

except he was doing breaststroke

Too many dolphin kicks off the wall, clearly.