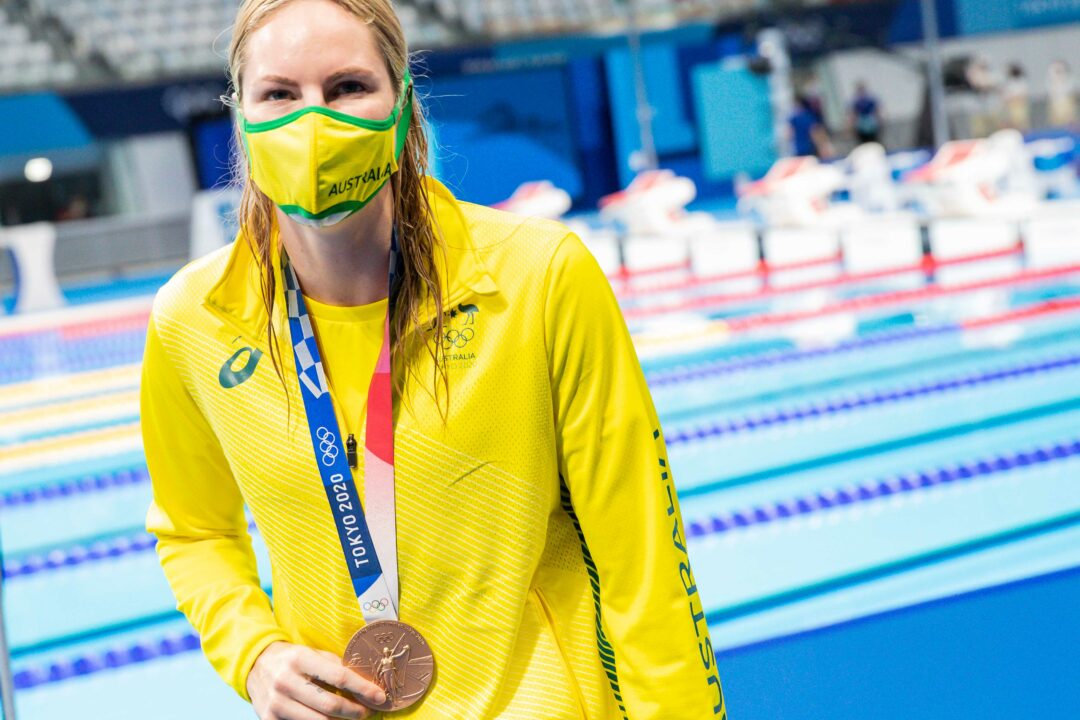 The three-time Olympic gold medalist Emily Seebohm has not raced in the pool since Tokyo, but she has made several reality television appearances. Archive photo via Jack Spitser/Spitser Photography

A spinoff of the Japanese show called Sasuke that debuted in 1997, Ninja Warrior pits competitors against each other in an increasingly-difficult series of obstacle courses. In the main competition, there is $200,000 in prize money up for grabs.

Seebohm is one of ten celebrities competing this season for $10,000 to charity and bragging rights. She was one of three celebrities to participate in Monday’s premiere, which included soccer player Archie Thompson.

But the athletes were shown up by an unlikely underdog: singer-songwriter Jack Vidgen.

All three celebrities fell on the same obstacle, a suspended snake-like beam that required competitors to pull themselves across while hanging from 27 doorknobs.

The tie-breaker, then, was the famed Warped Wall. A consistent presence in opening rounds of the competition, the Warped Wall is a 4.35 meter (just over 14 feet high) curved wall that athletes must run up and grab the edge before pulling themselves up and over the lip to finish the course.

Height is generally seen as an advantage in the feat. The six-foot tall Seebohm missed the ledge, as did the 5’9 Thompson.

But it was the 5’9″ Vidgen who was able to grab the lip and easily pull himself up to secure $10,000 for the Trish Multiple Sclerosis Research Foundation. Vidgen chose the charity in honor of his dad, who has MS.

Seebohm, 30, competed for Australia at four Olympic Games between 2008 and 2021. She has won three Olympic relay gold medals in her decorated career, among 7 total Olympic medals. She is also a 5-time World Champion and 7-time Commonwealth Games champion.

Seebohm has not competed since winning a medley relay gold and an individual bronze in the 200 backstroke at the Tokyo 2020 Olympic Games.

Besides Ninja Warrior, Seebohm also competed on the reality show I’m a Celebrity…Get Me Out of Here! since Tokyo. She wound up finishing 4th in that show behind a former Australian Rules Football coach and player, singer-songwriter Brooke McClymont, and actor Dylan Lewis.

wow shes really doing the rounds of reality TV lately… whats next? SAS Australia then Dancing with the Stars then The Bachelorette?

And was all glammed up at the Logies (Australia’s Emmy Awards) last week too! Good for her!

Ninja Warrior should definitely be an Olympic Sport. In the US version, an olympic medalist gymnast was overshadowed by other competitors. This alone proves competitors are amazing all around athletes, and the event is much more interesting then say, watching freestyle ski jumping over, and over again, waiting for judges to mark scores.

Modern pentathlon has proposed an obstacle course to replace the equestrian events after the ugly incident with the horse in Tokyo.

It would be a fun thought experiment to discuss how you would format the Olympic sport. Do you tell the athletes the events ahead of time? Is it randomized? Is there a set rubric of events that the course designer can choose from? Do they get practice runs, or go in blind? How do you rank athletes if a freak occurrence happens and nobody finishes? This would be unique among Olympic sports in the “pass fail” nature of completion being the primary challenge, with time being secondary. Sure, it’s possible that nobody… Read more »

Modern pentathlon is points based, correct? The Ninja Warrior format makes for easy conversion to a points based system, because each obstacle you get through could be scored for points.

How are you going to do the Salmon Ladder on a horse?

Are you suggesting a modern modern pentathlon?

Of course the Olympics had a Swimming Obstacle Race in 1900

“The 200m Obstacle Race was a combination of a swimming event and an obstacle race – the competitors had to climb over a pole, then scramble over a row of boats, and then swim under another row of boats
All this was done in the River Seine, so the competitors also had to contend with the current. This event was only ever held once, in 1900.

Those times seem really fast. Only a minute longer than the 200FR WR in a supersuit in a still pool.

LOL I just looked this up and it’s hilarious: https://en.wikipedia.org/wiki/Swimming_at_the_1900_Summer_Olympics

France sent 47 swimmers. The country with the second most swimmers was UK with 7. France entered two relay teams and won both silver and bronze.

The early Olympics depended on whether you were swimming with or against a current! The times were all over the place.
Extra factoid…Freddy Lane was Australia’s first Olympic Swimming Champion…our women took the first ever Olympic women’s Gold and Silver in 1912.

Glad to see my idea got some replies!

Ninja Warrior is amazing: incredible athleticism and exciting drama. I think Braden’s idea of a rubric of events that the designer can choose is the perfect solution. Athletes could then have a standard for training, but the actual course configuration would be varied for each tournament.

Much of Olympics seems kind of stale and boring. Olympics needs to do a better job of marketing. That also goes for swimming.