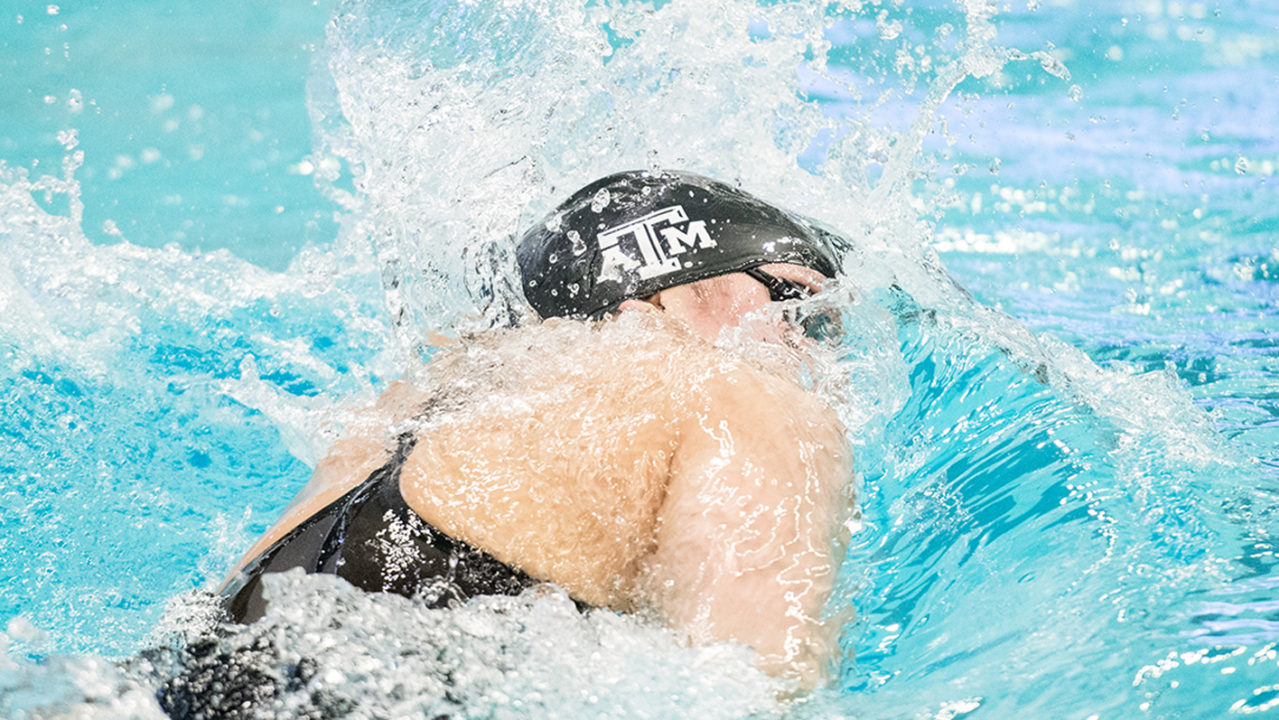 IMer Ella Eastin has withdrawn from the International Swimming League, but the LA Current have added Helena Gasson and Claire Rasmus in her absence. Archive photo via Texas A&M Athletics

IMer Ella Eastin has withdrawn from the International Swimming League, but the LA Current have added Helena Gasson and Claire Rasmus in her absence. They’ve also added Apostolos Christou on the men’s side.

The Current confirmed that Eastin withdrew from the league for personal reasons. She’s now one of a huge group of Stanford-based professional women who will not be competing in the ISL this season. Katie Ledecky was on the DC Trident last season but won’t compete this year, Simone Manuel has never been on an ISL roster, and recently-graduated flyer Katie Drabot also did not appear on a roster this year.

Eastin would have been the team’s top entrant in the 200 and 400 IMs this year, and likely a top 200 fly candidate as well. She finished 57th overall in the league in MVP points despite swimming in just three of LA’s four meets.

In her place, the Current have added two more women and another man:

Gasson hails out of New Zealand. While her IM times aren’t quite on Eastin’s level (Eastin has been 2:05.0/4:26.0), she fills a lot of the same events. LA is pretty loaded in women’s butterfly, but Gasson offers depth there too, especially in the 200.

Rasmus, an American, was on the DC Trident roster last year, though she swam in just one meet, with one event (400 free) and two relays. She fits into a distance free spot where LA is relatively thin, and her 400 IM could also help cover the loss of Eastin.

Christou is a Greek Olympian who should add solid depth in the backstrokes. The Current have Ryan Murphy to head up the backstrokes, but Christou gives some more multi-distance options for a team that only has the sprint-based Zane Waddell and was probably going to use butterflyer Tom Shields to fill in some gaps like he did last year.

Gasson was named weeks ago before any withdrawals.

How are we supposed to have a serious swimming league if top swimmers are dropping in and out like this?

I think that the reality is that this year is just going to be a strange year. If they get through year 2 without any major outbreaks of coronavirus, I think that’s a success.

Year 3 is going to be the real benchmark for the league, both from athletes and fans.

Better than having nothing to watch.

There is a constant in and out of athletes going on!

I really thought Ella would dominate a lot more in SCM considering how good she is at SCY and underwaters :/

Did she swim last year at ISL? I don’t even remember her there. “Dominate”?

learn how to READ omg

OMG. I did read and I was being sarcastic! She isn’t dominant short course at this level or she would have been higher last year!