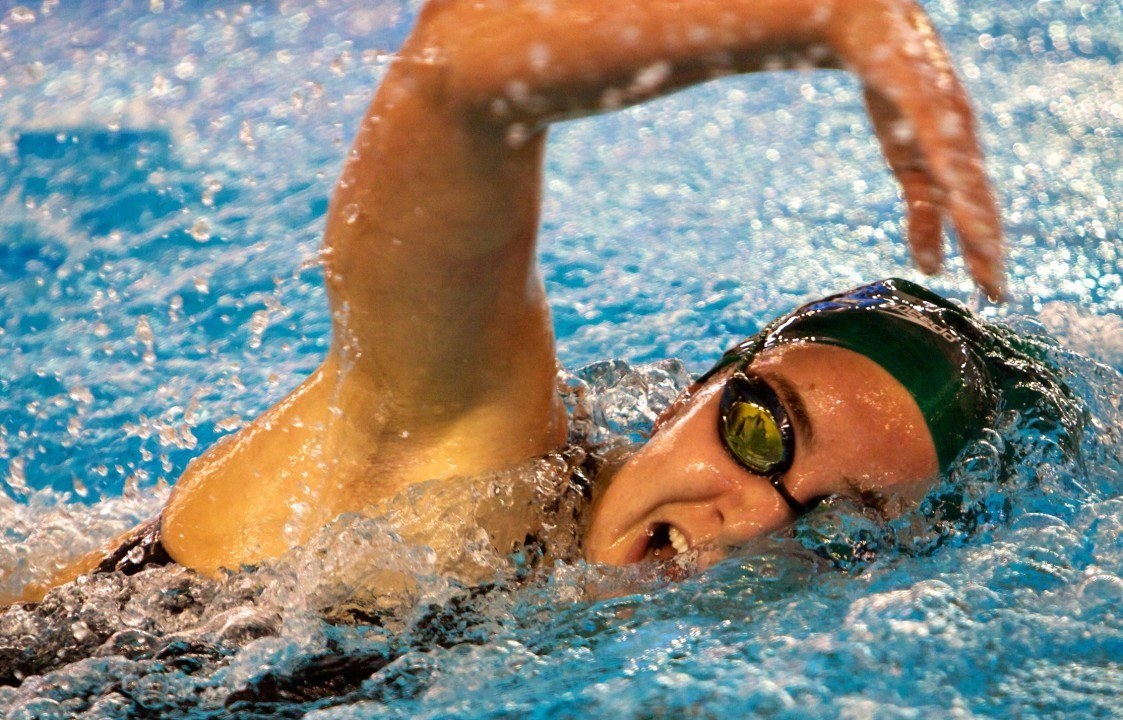 Annclaire Macart won the 200 and 1650 freestyles for the Big Green, breaking the meet and pool records in the latter. Archive photo via Tom McNeill

Destany Lewis has announced her intention to swim at Florida State University in 2021-22.

Dartmouth College hosted their annual January invitational this past weekend at the Upper Valley Aquatic Center. The meet featured four teams, including Dartmouth, Boston College, UMass Amherst, and Northeastern University. Only three teams competed on the men’s side, as Northeastern does not have a men’s team.

The Dartmouth women took the team title, scoring 1141 points to Northeastern’s 1030. However, the Boston College men managed to upset Dartmouth, who has not lost this meet since 2011. The Eagles defeated the Big Green 1272 to 1140.

The Northeastern women put up a strong 200 free relay to kick off the meet with a meet record. The team of Sara Touchette-McGowan, Rachel Green, Amanda Liew, and Carly Schnabel threw down a time of 1:37.02, narrowly taking down Dartmouth’s 2014 record of 1:37.17. The Dartmouth A relay touched second, followed by Boston College’s A relay.

Dartmouth was not to be kept down, however, and fired back with the top four swims in the 500 free. Freshman Molly Brickman led the way in 5:00.27 over her teammates Annclaire Macart and Hayley Winter. The Big Green also took the win in the 200 IM courtesy of Melanya Zaraska who touched in 2:08.11 over UMass’s Meriza Werenski. Taylor Yamahata of Dartmouth and Christine Leong followed, all clocking in under the 2:10 barrier.

Senior Kendese Nangle took the 50 free for Dartmouth, winning handily over Northeastern’s Touchette-McGowan. Nangle’s time of 23.86 clipped her own meet record, held since she was a freshman, by a hundredth of a second. Second through fourth touched nearly dead even with Touchette-McGowan, Dartmouth’s Megan Crook, and Northeastern’s Schnabel all racing in between 24.16 and 24.19.

Northeastern closed the first day of competition by completing a sweep of the day’s relays, also claiming the title in the 400 medley relay. Leong, Taylor Ellis, Delaney Lanker, and Jordan Domeier crushed the pool and meet record, both held by Dartmouth at 3:53.19, with a final time of 3:52.35. Dartmouth’s A and B teams followed in 3:55.52 and 4:00.59.

The Huskies continued their winning momentum through the first event the following day, taking the 200 medley relay in meet record fashion. The lineup remained the same save for the freestyle slot, which was taken over by Rachel Green. The crew raced home in 1:46.51 ahead of Boston College’s 1:49.60.

Werenski managed to get her revenge over Zaraska in the longer of the IM races, passing the Dartmouth freshman the last 50 to touch in 4:34.26. Zaraska finished in 4:35.14, ahead of Northeastern’s Touchette-McGowan. Not to be deterred, however, Touchette-McGowan came back to win the very next race in meet and pool record time. The sophomore’s time of 56.16 put her at the wall exactly a second ahead of Dartmouth’s Crook.

Dartmouth took a one-two-three sweep in the 200 free with Macart, Brickman, and Olivia Samson finishing ahead of Northeastern’s Schnabel. Macart and Brickman both managed to break 1:53, touching in 1:52.37 and 1:52.76. Northeastern junior Taylor Ellis followed up by breaking her own meet record in the 100 breast. Her time of 1:04.42 put her easily ahead of Crook, who finished in 1:06.05. Consistency is the name of the game for Ellis, who has clocked in at 1:04 in every performance this season.

Leong secured the 100 back for Northeastern by running down Dartmouth’s Nangle. The pair touched in 57.78 and 58.15 ahead of Brickman’s 58.55. Macart continued her freestyle winning streak in the 1650, winning by 26 full seconds to break both the pool and meet records in 17:08.40. Dartmouth also claimed the minor medals through Winter and Samson.

In her second close backstroke race of the day, Christine Leong came away with the win, this time running down Dartmouth’s Yamahata for the win. The duo touched in 2:04.72 and 2:05.02. Charlotte Kamai of Dartmouth stole the show in the 100 free, throwing down the fastest back half in the field to take down her teammate Amber Zimmerman.

Zimmerman earned herself another runner-up slot in the 200 breast, touching behind Northeastern’s Ellis, 2:22.95 to 2:25.36. Madeleine Dunn followed in 2:25.73. Lanker easily claimed the 200 fly for the Huskies in 2:05.01, winning over Dartmouth’s Zaraska and Grace Herron. Dartmouth closed out the meet with a dominating show in the 400 free relay, nabbing both the victory and the runner-up positions with their A and B teams. The winning team of Nangle, Crook, Samson, and Kamai touched in 3:31.37. Emma Roush swept the diving events for UMass, winning the one-meter over her teammate Katie Polk and the three-meter over another fellow Husky, Julia Jagannath.

Propelled by a 20.69 lead off leg, Boston College’s 200 free team of Dan Kelly, Conor Chamness, David Hunter, and Colin Derdeyn claimed the victory over Dartmouth in 1:24.23. The Eagles also broke Dartmouth’s former meet record by a tenth of a second. UMass took the bronze while Boston College’s B team finished fourth.

Three men broke 4:40 in the 500 free, led by Dartmouth’s Bruno Korbar. Korbar’s winning time of 4:33.90 missed his former teammate Jun Oh’s meet record by less than three tenths of a second. Boston College’s Anthony Richardson put in a strong back half to hold off Dartmouth junior James Thompson, 4:37.89 to 4:38.81.

Boston College freshman Taylor Cortens put in a 28-mid backstroke leg to win the 200 IM ahead of the Dartmouth duo of Aaron Athanas and Henry Senkfor. Cortens touched in 1:53.98, while Athanas held off a fast-closing Senkfor to claim the silver by two hundredths. Boston College also nabbed a win through Dan Kelly in the 50 free. Kelly’s individual swim of 20.26 pulled four additional tenths off of his relay lead-off, breaking both the meet and pool records formerly held by Dartmouth’s Will Derdeyn. UMass’s Owen Wright also clocked in under 21 seconds, finishing second in 20.90.

Kelly continued to impress in the men’s 200 medley relay, where his sub-20 freestyle anchor led his team past Dartmouth for the win. Kelly and the crew of Josh Williams, Billy Miller, and David Howard hit the wall in 1:32.76 to break both Dartmouth’s meet and pool records by four hundredths of a second. The Big Green had to settle for second with a time of 1:33.49.

Dartmouth’s Logan Briggs soared by the competition in the 400 IM, securing the title in 4:03.67 over Boston College’s Cortens (4:08.18). His teammate David Harmon followed up with another win in the 100 fly, throwing a wrench into Dan Kelly‘s winning streak. Harmon’s strong back half propelled him to a time of 50.43 ahead of Kelly’s 51.63.

Dartmouth claimed their third consecutive win in the 200 free, where Misha Tovmashenko annihilated the former meet and pool record of 1:40.62, set by Chris Inglis in 2012. Tovmashenko’s 1:39.19 put him nearly three seconds ahead of runner up Korbar. Miller claimed his second win of the day in the 100 breast, interrupting Dartmouth’s streak of victories with a time of 58.49. Miller touched narrowly ahead of his teammate McKenzie Cole (58.58).

The Big Green returned to form in the 100 back with a strong performance from James Verhagen. Verhagen, who competes for South Africa internationally, broke his meet and pool records with a new standard of 50.17. Boston College laid claim to the minor medals with runner-up Chamness touching in 51.07 and Josh Williams finishing third. Massachusetts then gained a meet record of their own through Alessandro Bomprezzi, who won the mile in 15:52.06 ahead of Boston College’s Richardson.

Verhagen completed his sweep of the backstroke meet and pool records by throwing down a 1:50.00 to beat Boston College’s Cortens (1:52.19). Williams once again struck bronze in 1:53.70. Kelly swam to his usual standard in the 100 free, smashing Ian Woon’s former pool and meet record of 45.90 with a 45.15, faster than he swam at the ACC Championships last year.

The 200 breast saw two Dartmouth men under 2:10, with Timo Vaimann leading the way in 2:05.93. He was followed by his teammate Delaney Hall in 2:07.99. Harmon followed with another Dartmouth win in the 200 fly, holding off a charging David Howard to touch first in 1:53.13 to Howard’s 1:53.91. The Big Green then laid rest to the meet record in the 400 free relay, taking down UMass’s former mark with a time of 3:06.12, crushing Boston College’s 3:10.74. Brett Gillis swept the diving events for Dartmouth, barely beating out Boston College’s Cole Malatesta for both victories.