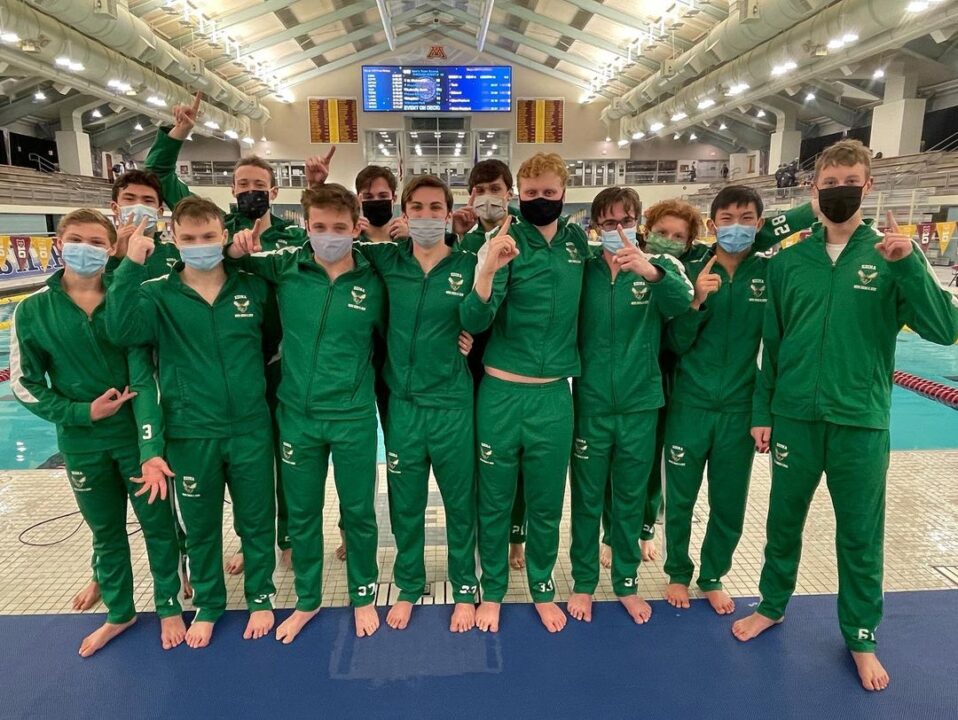 Despite not winning any individual events, the Edina boys managed to pick up the team title at the 2021 MSHSL Class AA Championships. Archive photo via Edina High School Boys' Swimming & Diving

The Edina boys defended their 2020 MSHSL team title at the 2021 version of the meet, scoring a total of 302 points to win the meet by over 100 points. The Class AA meet includes the state’s biggest high schools.

That marks Edina’s 3rd-straight State Championship and 13th overall: just two behind St. Thomas Academy for the most ever.

Unlike the Minnesota girls, who ended their fall season with Sectional, but no State, Championship meets, the boys Class AA and A seasons will end in Minneapolis, albeit in timed finals.

Interestingly, Edina managed to pull off the team victory without securing any event wins. Kai Taft picked up a silver for Edina, however, hitting a 1:50.92 to lower his PB from a 1:52.17 which he swam earlier this month.

Stanford commit Hayden Zheng collected the win in that event for St. Louis Park with a 1:47.38 while Ben Binder from Minnetonka was third in a 1:51.00.

Zheng A senior, Zheng is committed to swim at Stanford next fall.

Edina did finish as runners-up in both the 200 medley and 400 free relaysas well. In the 200 medley, Eden Prairie took the win in 1:31.16 with a team of Luke Logue, Alex Deng, Artem Demidov, and Wilson Ellis. Logue, just a sophomore, led that relay off in 22.99, which was the fastest backstroke split of the field.

That was part of a sprint-relay sweep for Chanhassen-Chaska: the same quartet combined for a 1:22.54 win in the 200 free relay which set a new Minnesota High School Record. That included matching 20.24s on the last two legs for Brennan and Block. The old record was set by Eden Prairie in 2017.

Three of those swimmers will compete in Division I of the NCAA next season, while Brennan will attend Iowa Central Community College.

The old State Record of 48.20 was set by Martin Zielinski of Bloomington Jefferson in 1995.

In the 100 backstroke, Luke Logue took gold for Eden Praire with a 49.59 to shave nearly two seconds off his entry time of 52.31. Patrick Horton and Sven Becker also dipped under the 50-second mark with a 49.70 and 49.92 for silver and bronze, respectively.