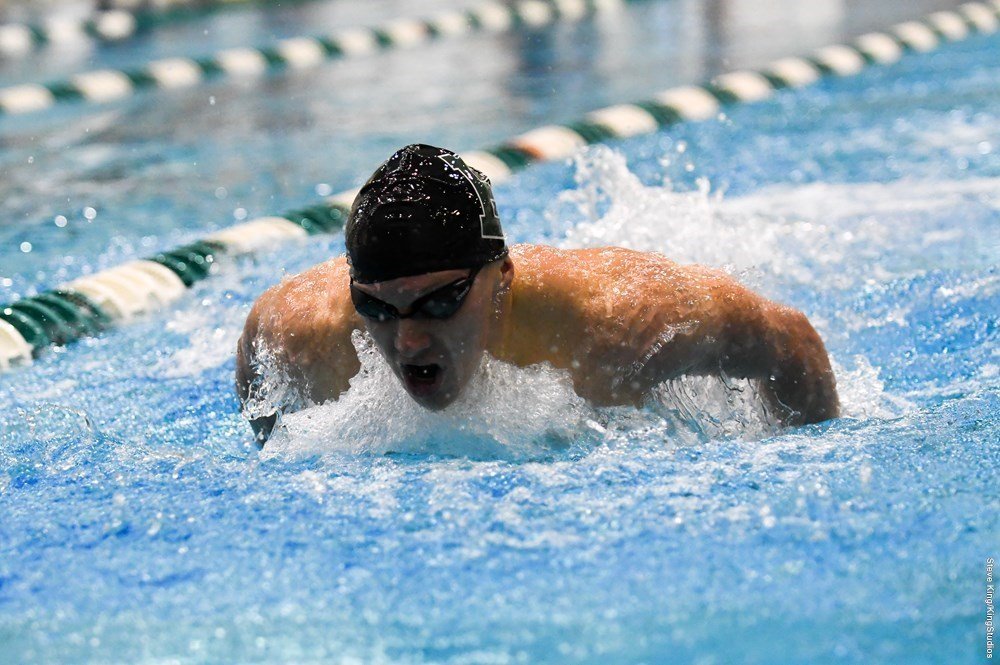 Regan Smith (above), Phoebe Bacon, and Isabelle Stadden are in one heat of the women’s 100 back, while Kathleen Baker, Beata Nelson, and Olivia Smoliga are in the other.

DETROIT, Mich. (EMUEagles.com) – After posting a win against Ball State University Friday, Jan. 19, the Eastern Michigan University women’s swimming and diving kept the winning streak alive with an impressive, 181-111, victory over Wayne State University Saturday, Jan. 20. The Eagles move to 6-1 on duals this season as they remain undefeated against the Warriors.

Junior Nicole Swartz (Dayton, Ohio-Centerville) remains perfect in the 1000 freestyle this season as she clocked in at 10:08.82 to take first. Senior Sarah Dombkowski (Canton, Mich.-Plymouth) and freshman Kaitlynd Scanlan (Waukesha, Wisc.-Pewaukee) rounded out the EMU sweep with times of 10:21.13 and 10:34.24, respectively.

The Green and White kept the sweeps going in the 200 free as junior Emilie Desnoyers (St. Albert, Alberta) just edged out freshman Meike Staffeldt (Niedersachsen, Germany) by a hundredth of a second at 1:55.74 to take first. Rounding out the top-three was junior Stephanie Johnston (Holland, Mich.) who touched in at 1:59.13.

Sophomore Casey Gavigan (East Setauket, N.Y.-Ward Melville) turned in a time of 57.08 in the 100 backstroke to take first, while junior Dora Vrcic (Dubrovacka, Split, Croatia) and Liberman completed EMU’s third sweep of the afternoon at 57.98 and 58.40, respectively.

In the 100 breaststroke, the Green and White took a pair of the top-three spots in the form of Duncan and freshman Riley Hofmann (Ada, Mich.-Forest Hills Central). Duncan nabbed first-place with a blistering time of 1:02.53, over five full seconds ahead of the runner-up, while Hofmann took third with a time of 1:08.87.

Eastern’s winning streak was halted in the 200 butterfly as freshmen Abby Rapien(Cincinnati, Ohio-Taylor) and Ali Staver (Bettendorf, Iowa-Pleasant Valley) were slotted at second and third with times of 2:09.75 and 2:10.12, respectively.

Senior Chase Walker (Virginia Beach, Va.-Landstown), Armstrong-Grant, and junior Marissa Marion (Rockford, Mich.-Rockford) got the Eagles back on track as they took the top three spots in the 50 free. Walker bested the field with a time of 24.42 for first, while Armstrong-Grant took second at 24.64. Competing in the 50 free for the first time this season, Marion took third with a time of 24.76.

At this point, the meet diverted attention to the diving board as the Eagles dominated on the 3-meter. Seniors Emily Tubbs (Monroe, Mich.-Monroe) and Molly Miller (Farmington Hills, Mich.-Harrison) took the top-two spots with finals scores of 289.05 and 268.13, respectively. Freshman Bethany Berger (Batavia, Ohio-Glen Este) rounded out the sweep, posting a season-high score of 260.70. On the 1-meter, EMU competed as exhibition with freshmen Mikela Schempf (Bowling Green, Ohio-Bowling Green) posted the top score with a season-best 276.83.

As the meet transitioned back to the individual events, Eastern continued the sweeps in the 100 free. Staffeldt snagged first-place, turning in a time of 53.15, while Johnston followed right on her heels at 53.22. Armstrong-Grant rounded out the top-three at 53.84.

Gavigan won her second event of the afternoon in the 200 back while Swartz, competing in the event for the first time this season, took second at 2:08.38.

After Delaney posted a first-place finish in the 200 breast, Dombkowski headed a sweep in the 500 free. Behind Dombkowski, Shugarman and Hofmann touched in at 5:12.68 and 5:15.39 to take second and third, respectively.

After Wayne State took first-place in the 100 fly, Eastern elected to defer all points for the remainder of the meet as it was well ahead in the team standings.

The Eagles concluded the afternoon with a pair of top times in the 200 individual medley and 200 free relay.

Eastern Michigan is back in action next weekend when it treks down to Oxford, Ohio to take on Miami Saturday, Jan. 27. Action is slated to begin at 1 p.m.

DETROIT, Mich. (EMUEagles.com) — The Eastern Michigan University men’s swimming and diving moved to 5-1 in duals this season as it rolled past Wayne State University, 172-101, at WSU Natatorium Saturday, Jan. 20. The Eagles, who have not lost a meet to the Warriors since the two squads met in the 2005-06 campaign, locked up their 13th victory over WSU.

After the Warriors opened the afternoon with a win in the 200 medley relay, the Eagles responded back by sweeping the 1000 freestyle. Sophomores Tanner Olmos (Clovis, Calif.-Buchanan), Parker Saladin (Buchanan. Mich.-Buchanan), and Corey Smith (Lansdale, Pa.) finished 1-2-3, respectively. Olmos turned in a season-best time of 9:43.98 to take first, while Saladin, in his first 1000 free appearance, nabbed the runner-up spot at 9:50.84. Smith rounded out the sweep at 9:54.43.

It was a battle for first-place in the 100 backstroke as junior Tosh Kawaguchi (Cary, N.Y.-Cary) and senior Logan Burton (Chesapeake, Va.-Hickory) snagged the top-two spots. Kawaguchi placed first with a time of 49.22, while Burton followed right on his heals at 49.89 to take second.

The Green and White’s winning streak was halted in the 100 breaststroke as freshmen Ben Brooks (Avon, Ohio-Avon) and Ben Gingher (Boalsburg, Pa.-State College Area) were slotted at second and third with times of 57.89 and 58.24, respectively.

The Eagles were a force to be reckoned with on the springboard as they won both the 1- and 3-meter dives. In the 1-meter, EMU swept the event as sophomore Noah Galluzzo (Mexico, N.Y.) took first with a final score of 329.18, while junior Tom Gillis (Halifax, Nova Scotia-Citadel) and freshman Al’x Pierre (London, Ontario-St. Thomas Aquinas) battled for second. Gillis just edged out Pierre with a final score of 321.90 as the freshman finished the event at 321.60. In the 3-meter, senior Peter Rusenas (Naperville, Ill.-Naperville Central)nabbed the top spot with a final score of 312.61, while Pierre ended the afternoon with a second-place finish with a score of 288.61.

In the 200 breast, the Eagles saw a pair of swimmers in the top-three in the form of Gingher and sophomore Aaron Hendry (Evans, Ga.-Evans). Gingher turned in a time of 2:03.76, good for first-place, as Hendry clocked in at 2:06.86 for third-place.

Making their 500 free debut this season, Burton and Kawaguchi both had outstanding showings as they headed a sweep of the top-four spots. Burton took first with a time of 4:36.52 to own the ninth fastest time in the Mid-American Conference and fastest 500 free time this season for the Eagles. Kawaguchi followed close behind at 4:37.65 to take second, while Arrieta and Ehrman rounded out the sweep at third and fourth, respectively.

Eastern continued to pull away from the Wayne State as Johnson took first-place in the 100 fly and sophomore Mark Krusinski (Brecksville, Ohio-Brecksville Broadview Heights) took third at 51.50.

In the final individual event of the afternoon, the Eagles posted four of the fastest times in the pool, but elected to defer points since they were well ahead in team standings. Junior Ricky Perez (Greenfield, Wis.-Greenfield) touched in first at 1:56.71 while Saladin turned in a season-best time of 1:56.76 for the second fastest time in the pool.

An EMU cohort of Burton, Segal, Swift, and Brooks posted the fastest 200 free relay at 1:24.81 to cap the afternoon.

Eastern returns to action next weekend as it travels to Oxford, Ohio to take on MAC foes, Miami Saturday, Jan. 27. Action between the two squads is set to begin at 1 p.m.

UP NEXT
The Warriors will resume action on Wed., Feb. 14, traveling to Jenison, Mich. for the start of the GLIAC Championships. That event will run through Sat., Jan. 17.

INDIVIDUAL WINNERS
Sophomore Leo de Oliveira (Sao Paulo, Brazil) was the top finisher in the 1000 free with a time of 9:57.85.

TOP PERFORMERS
In the 100 free, Katulski was second with a time of 47.25. Senior Tyler Roshak (Farmington Hills, Mich. / Harrison) was right behind him in 47.58.

UP NEXT
The Warriors will resume action on Wed., Feb. 14, traveling to Jenison, Mich. for the start of the GLIAC Championships. That event will run through Sat., Jan. 17.