Drew Hitchcock, #4 In Class of 2024, Announces Commitment To Georgia 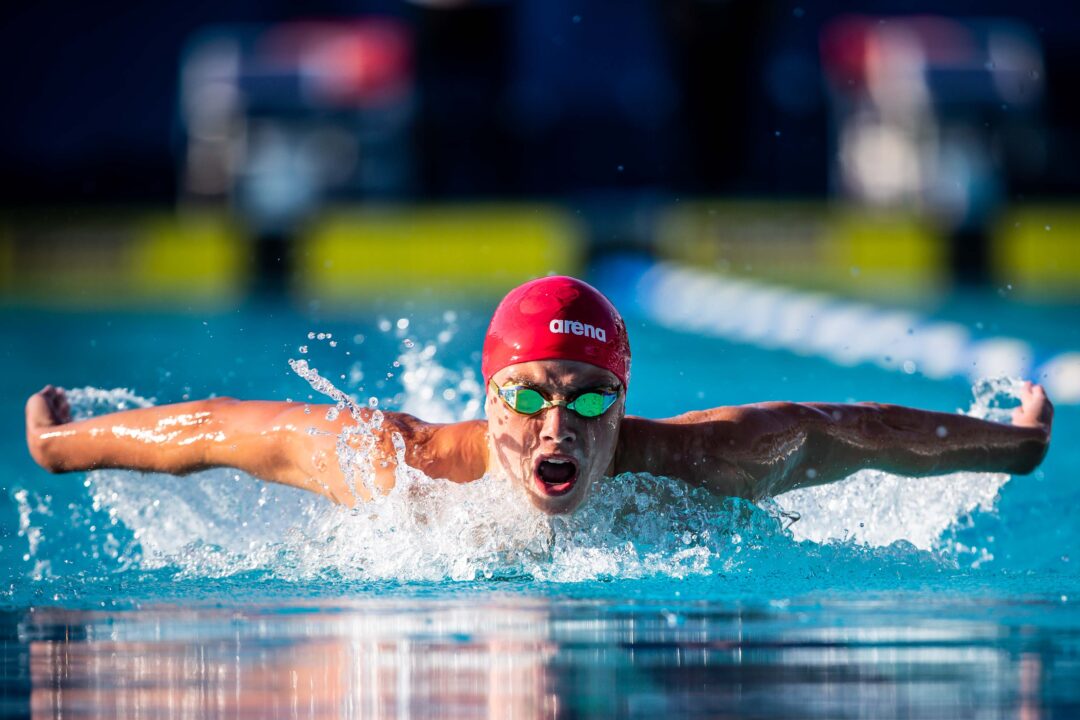 Hitchcock is the fastest 200 IMer in the boys' class of 2024 and is within striking distance in the 200 fly and 400 IM. Archive photo via Jack Spitser/Spitser Photography

Drew Hitchcock, the #4 ranked recruit in the boys’ high school class of 2024, has announced his commitment to the University of Georgia Bulldogs.

“I am super excited to announce my verbal commitment to continue my academic and athletic career at the University of Georgia! I would like to thank Coach Neil Versfeld for giving me this opportunity. I would also like to thank Coaches Flack, Pittman, and Jolley along with my family, friends and teammates for supporting me along the way. I could not be more excited to be a Bulldawg! Go Dawgs🐶🔴⚫️!!!!”

Hitchcock is arguably the best medley swimmer in the class, owning the top time in the 200 IM (1:46.30) and the second-fastest in the 400 IM (3:47.29). That fits right into a UGA program that has consistently churned out world-class IMers, including the reigning Olympic gold and silver medalists in the 400 IM, Chase Kalisz and Jay Litherland.

He’s also strong in the 200 fly, owning a best time of 1:44.81 which is three-tenths shy of the top time in the class, belonging to Cooper Lucas. Lucas, the #2 recruit in the class, announced his commitment to Texas on Sunday, and #5 Lucca Battaglini is headed to Cal, meaning three of the top five have already committed as of early October (and seven of the top 12).

Hitchcock is a product of Baylor Swim Club and the Baylor School in Chattanooga, Tennessee.

In addition to Lucas and Battaglini, #7 Carter Lancaster (Cal), #10 Chase Swearingen (Kentucky), #11 Nolan Dunkel (NC State) and #12 Matt Marsteiner (NC State) are the other highly-ranked recruits who have already announced their collegiate commitments for 2024.

Georgia has picked up one top 20 recruit in each of the two previous classes, #18 (re-rank) Sam Powe is joining the Bulldogs this season (class of ’22), and #19 in the class of ’23 Tristan DenBrok is committed for next year.

Not hating, great school and great pickup! Congrats to Drew and best of luck!

I’m curious though if anyone has thoughts on why Tennessee never gets recruits from Baylor. They’re producing at least one elite prospect each cycle if not more. I know Chattanooga isn’t Knoxville, but it’s hard to grow up in East Tennessee without being a Vol fan. Surprised there haven’t been at least one or two over the last couple of years who decided to stay close to home. On the contrary, feels like almost the entire state of Texas stays home either at the other UT or TAMU. I know Tennessee men aren’t on the same level as Texas, but both men and women are… Read more »

A pretty decent amount of Baylor’s successful swimmers are not from Tennessee. They come in high school as boarders. Their last truly elite home grown male was Sam McHugh in 2014, who did go to Tennessee. To your point though, the club’s last two home grown elite swimmers have been Ellie Waldrep (Auburn) and Cecilia Porter (Florida), I guess they just preferred I better shade of Orange 😉
Long story short, when your High School runs effectively like a JuCo and you bring in fast kids from across the world, you send them back out across the country for college.

Whatever happened to Porter? She didn’t last long at Florida it seems

That’s a great question! It might just be wanting to get away for college. No offense to the state of Tennessee – but most people who live there growing up tend to leave state once they have the choice to.

I think you’re gonna want to check your facts. 71% of people born in Tennessee stay in Tennessee (that stat is from 2012… the most recent year I could find). And actually in 2020, it ranked 7th on states that people were moving in to. Don’t hate on the state….. some people would just rather not go to UT.

13th highest of all states, low cost of living, GDP per capita has risen over $1000 dollars over the past 2 years which is faster than the national average. It is definitely high, would take some real work and opinionated thinking to deem it good or bad. But the point remains that it’s factually inaccurate to say that people born in the state tend to leave when they get the chance.

Big things coming for the dawgs