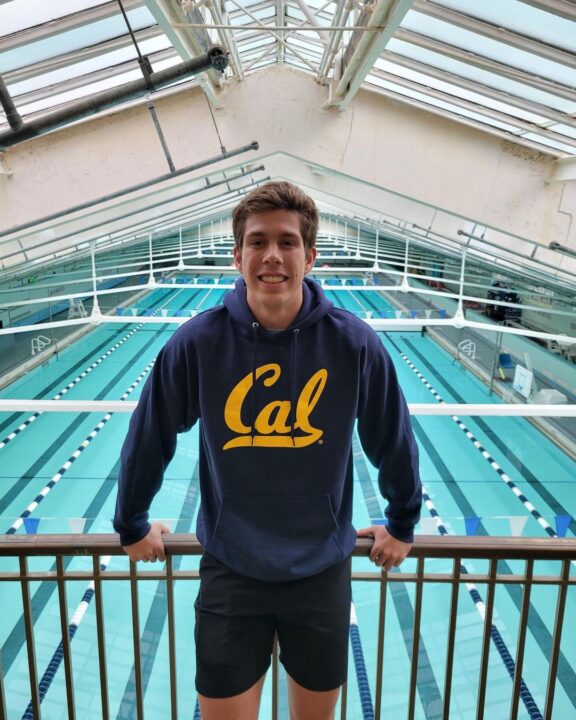 The Cal Bears already have two of the top ten recruits in the high school class of 2024, as #5 Lucca Battaglini announced his commitment. Current photo via Lucca Battaglini

Lucca Battaglini, #5 on our list of high school boys in the Class of 2024, announced that he that he plans to head to the West Coast for college, verbally committing to the Cal Golden Bears.

As I am wrapping up swimming on the east coast, I am excited to head over to the west coast in 2024 to continue my swimming and academic career at The University of California, Berkeley! It was an amazing process to get to this point where I had the privilege of meeting many incredible people. I’m grateful for my Dad who has been my coach for most of my swimming career, my whole family, along with everyone who has supported me all these years. I cannot thank coach Dave Durden, coach Matt Bowe, and coach David Marsh enough for giving me this opportunity to be a part of excellence. Go Bears 🐻

Battaglini hails from Durham, NC, where he swims with East Carolina Aquatics for club and Durham Academy of the Arts for school. His dad, Claudio, is his head coach at the club’s Chapel Hill site. Luca is primarily a sprinter who has top-notch times across free, fly, and backstroke.

Battaghlini doesn’t currently lead his class in any events, but he’s about as close as you can get in the 50 free, where he sits just 0.01s behind top recruit Daniel Diehl. He’s also only 0.24s behind Kentucky commit Chase Swearingen for the top time in the 100 fly.

As we said in our rankings, Battaglini seems destined to be a classic 50 free, 100 fly, 100 free in the mold of former Golden Bears like Nathan Adrian, Seth Stubblefield, Justin Lynch, and Ryan Hoffer. With another two years until he heads to Berkeley, that 200 free time could improve enough where he could also be an option for the 800 free relay (more like a Tom Shields).

As a sprinter, Battaglini nicely complements the other top ten recruit commitment Cal has gotten in this class, #7 Carter Lancaster. While Lancaster has some solid 100 times, he’s primarily an IMer and a 200 backstroker.

Most of the crew that helped Cal win the NCAA title last season will be gone by the time Battaglini arrives, but sprint freestylers Jack Alexy and Robin Hanson should be still be around, as will class of 2023 recruits like Roman Jones, Samuel Quarles, and Aaron Shackell, among others.

Congrats Lucca! Met him and his dad at summer juniors. He’s a beast who will be a force in college.

This class shaping up to be like Cal’s 2017 recruiting class, rip to all other programs trying to be competitive.

About time Cal got a good recruit

I hope you’re an overly demanding & sarcastic Cal superfan instead of a spiteful troll.
Congratulations Mr. Battaglini. Those are amazing best times for a HS sophomore.

You know Braden Holloway is punching the air right now. He could have gone to NC State right in his backyard!

Recruiting is a national game and some kids are eager for a geographical change. I am positive that NC State will snag a top Bay Area recruit.

@JohnHueth Perhaps…or perhaps not. Braden just got the #12 recruit who’s local and two top 10s locally last year and 1 local Top 10 the year before, so he seems to be faring pretty well in the Triangle.

@BearlyBreathing I agree with the sentiment but SwimSwam doesn’t appear to have any Bay Area males in the Top 20 or HM this year, so doesn’t seem like the comparison works this year.

Of course winning is the biggest draw for any recruit, but I have to believe that Cal’s academic prowess is an additional draw and accounts for much of Durden’s recruiting success.