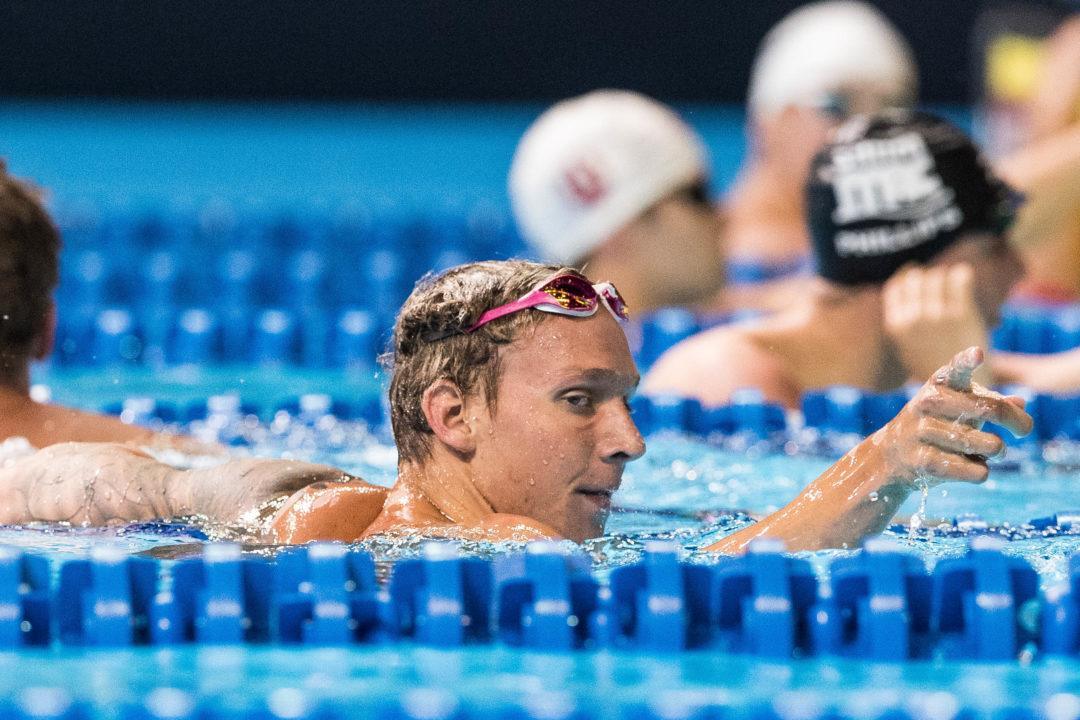 Florida’s Caeleb Dressel pulled off a winning triple to help the Gators to victory over Tennessee. He got the ball rolling with an 18.91 free split on the 200 medley relay and later won the individual 50 free in 19.41, just out-touching Tennessee’s Kyle Decoursey (19.48). Dressel, who turned heads with his 200 IM performance at the Purdue Invite back in November, won the event against the Vols with a quick 1:44.94. He also swam to a 53.23 victory in the 100 breast, outpacing teammate Marco Guarente (53.61) and Tennessee’s Peter Stevens (53.65) through the back half.

All-American Khader Baqlah and standout freshman Michael Taylor each won a double for Florida. Baqlah dominated his signature 200 free in 1:35.88 before picking up a 4:22.20 win to top the 500 free field by 2 seconds. Taylor led from start to finish in the 100 back with his 47.71. He completed the backstroke sweep in the 200 back, pulling ahead of Tennessee’s Joey Reilman (1:47.10) on the back half to win it in 1:44.83. Fellow Gator freshman Clark Beach was able to catch Reilman for 2nd place in 1:46.77, while Reilman wound up 3rd.

GAINESVILLE, Fla. – The no. 4/16 Florida Gators split their final dual meet of the season against the no. 9/12 Tennessee Volunteers on Friday at the Jones Aquatics Center.

Florida’s fourth-ranked men’s squad played spoiler to Tennessee on its Senior Day, defeating the Volunteers 178-122. The 16th-ranked Florida women fell to no. seven Tennessee 184-116 during the meet.

The Gators’ hold the all-time series advantage over Tennessee, with the men moving to 25-20 and the women falling to 27-5 in dual meet competition.

The men finished the dual meet season with a 7-1 record and the women recorded a 4-5 record during the 2017-18 campaign.

Switkowski and Szaranek swept the butterfly events with B-cut times, with Switkowski swimming a 47.08 in the 100 fly and Szaranek recording a time of 1:45.53 in the 200 fly. Both men were also on the winning 400 free relay team that recorded a time of 2:56.01.

Sophomore Emma Ball grabbed a win for the Gator women, swimming a B-cut time of 53.50 in the 100 back to clinch the victory.

Brooke Madden rounded out the wins for Florida, finishing first on the 1-meter board with a Zone qualifying score of 304.80.

The men finished with 22 top-3 finishes throughout the meet, while the women notched 18 of their own.

Florida is back in action on Feb. 2-4 at the Auburn Invitational.

KNOXVILLE, Tenn. — The Tennessee swimming and diving team concluded the regular season Friday with a split against Florida at Allan Jones Aquatic Center.

Junior Madeline Banic picked up her first victory in her second meet of the season. She led a 1-2-3 Tennessee finish in the 50 freestyle, which she won in 22.77.

The divers led the way for the Vols in the men’s meet. Zeng won the 1-meter springboard (397.88), followed by Stone. The two Vols reversed order on the 3-meter. Stone won on his own senior day with a score of 387.75, just 0.75 points ahead of Zeng. Will Hallam was third and Nick Rusek took fourth.

Tennessee swept both 200 medley relays to start the meet, and the Lady Vols also won the closing 400 freestyle relay.

QUOTES
Tennessee head coach Matt Kredich:
(On the women’s meet)
“We didn’t show any weakness. We were strong across all our events. We raced well. We had people rising to the occasion who haven’t necessarily done so yet. We had people who struggled the last few weeks have outstanding swims. We’ve got some good momentum to carry into SECs.”

(On the men’s meet)
“One thing I saw from our men that was impressive was that we got behind in a few races, and there was a noticeable surge, especially in the second half of some 200s, that we haven’t necessarily seen. Our competitiveness was uniformly very high. We competed well. We didn’t have quite the presence I’d hoped we had in a couple of the really close races, but we certainly didn’t give up. We actually gave ourselves a chance to win races that I think two or three meets ago that wouldn’t have happened. Florida holds us to a high standards, and they were outstanding today.”

Tennessee diving coach Dave Parrington:
“Liam getting a big win on 3-meter in a close contest. He did a good job on 1-meter as well. He was 80 or so points better than he did a week ago at Georgia, which was a big highlight. He was showing some really good signs and looking like himself. He’s getting his takeoffs. His strength looks great. He’s higher in the air. He’s moving faster. All of a sudden, it’s different than what he’s been dealing with all year. Now he’s adjusting the finishes, and we have a couple weeks to work on that before SECs. Colin was solid today. Another great highlight was Will Hallam going 370 on 3-meter. That was a big, big step.

“It was a good win by Rachel on 3-meter against a really good Florida diver. Rachel was second on 1-meter and Ana (Hernandez) stepped up after a disappointing 3-meter, jumping up to third. Keegan (Richardson) dove exhibition on platform and had a zone qualifying score. That was huge for him because he’s been close two or three times. We had a lot of positives today. Emily (Pelletier) was back in competition. She and Sean (Meyers) are diving better.”

Interesting lineup. May be experimenting for NCAA’s? Whatever he and Troy chooses though is probably for the best. Looking forward to March!

I remember three years ago, Troy said that Dressel could be a great IM’er… hard to imagine he’ll let him finish his college career without taking a serious crack at Nolan’s record. My guess would be SECs, though, back to normal lineup for NCs.

Florida starting to look very strong down the stretch. While breaststroke is still a relative weakness, a 53.6 from Guarente at this point is very promising. Does anybody think they can challenge Cal and Texas and break into the top two at NCAAs?

11
0
Reply
JP input is too short
Reply to  swimming

They need more people qualifying to swim individual events. You can pretty much shoo in Dressel, Switkowski, Szaranek, Rooney and Baqlah, but their next tier guys all have quite a bit of work to do – Taylor is a must. IMers Sanders, Lebed, Balogh, Palazzo, distance guys Kennedy, Manganiello and Brady. Bray made it last year and Guarente would be a bonus with how well he’s swimming. That’s a lot of guys that have work to do. Texas and Cal have guys like that as well, but not quite as high a percentage. If everything goes right for all three of those teams, they could all have completely full rosters at NCAAs. I think those are the only teams that… Read more »

8
0
Reply
Caleb
Reply to  JP input is too short

Taylor qualifying isn’t really a question… more like, can he win the 100 back? But I don’t think Florida can crack top two unless Texas or Cal has a really rough meet. The fight for 3rd will be a great compeition. I wonder if Indiana is in the mix?

3
-5
Reply
JP input is too short
Reply to  Caleb

I would agree that Taylor should be a for sure, but he doesn’t have the numbers for it at this moment. Actually now that I look at it, Rooney isn’t quite there either. They both have to get it done at SECs.

I think Indiana is up there in that Florida/NC State/Stanford tier. They have as good or better top-end talent as anyone else – Pieroni, Lanza, Finnerty should all be going for swimming championships, Hixon for diving, and their new backstroker is a wildcard. Michigan will be in that tier too if a backstroker steps up.

6
0
Reply
Caleb
Reply to  JP input is too short

That net seems a little wide. Stanford or Michigan could beat one of the higher teams, but I don’t see any way they beat Florida AND NC State AND Indiana to get 3rd. They could be 5th, or 10th. Indiana? I get the feeling their training cycle is more suited than most to swimming fast in-season, so they might not be quite as good as they look now on paper. But who knows? Program is rising, they’re deep and have a ton of talent. Maybe not enough top-tier guys; I don’t see Lanza with any top-3 finishes. As far as making cuts… safe to say that if you can’t qualify a lot of guys at your conference meet, you’re not… Read more »

8
0
Reply
BSD
Reply to  JP input is too short

Anyone else kind of freaking out that Dressel beat Peter John Stevens, who got the silver in the 50m breast behind Adam Peaty at 2016 Euro Champs, in a BREASTSTROKE RACE? If there weren’t event limits, Dressel could realistically medal/win the 50/100/200 free, 100 fly, 200 IM, and 100 breast!

He could really post a good time in IM Long course. I hope he swims it sometime at a pro series. Would also love to see him break 1:00 in breast.

I know–insane! He could probably make the top 5 at NCAAs swimming as his own team.

The kid is good but… I would.

I’m not gonna put any boundaries on Dressel after what happened last summer. He went in as a 52 second flyer and came out as the 2nd fastest man in history

Worth nothing Stevens hasn’t exactly been rocking 100s for the past 12 months – He failed to break 1.03 at worlds.

I was gonna be the guy that comes in here and poo-poos all this speculation – “Dressel isn’t a long course breaststroker” – but I mean, pretty sure he could do whatever at this point.

He certainly has a nice looking breastroke, and it looks pretty transferable to LCM too.

You get sprinters who can bust a super SCM/SCY breaststoker with brute strength, then it falls apart LC when the 25m wall doesn’t arrive. Based on a few videos, Dressel’s looks a far more balanced stroke, and far less rushed than your average part time breaststroker.

It’s his back that looks in need of a little work.