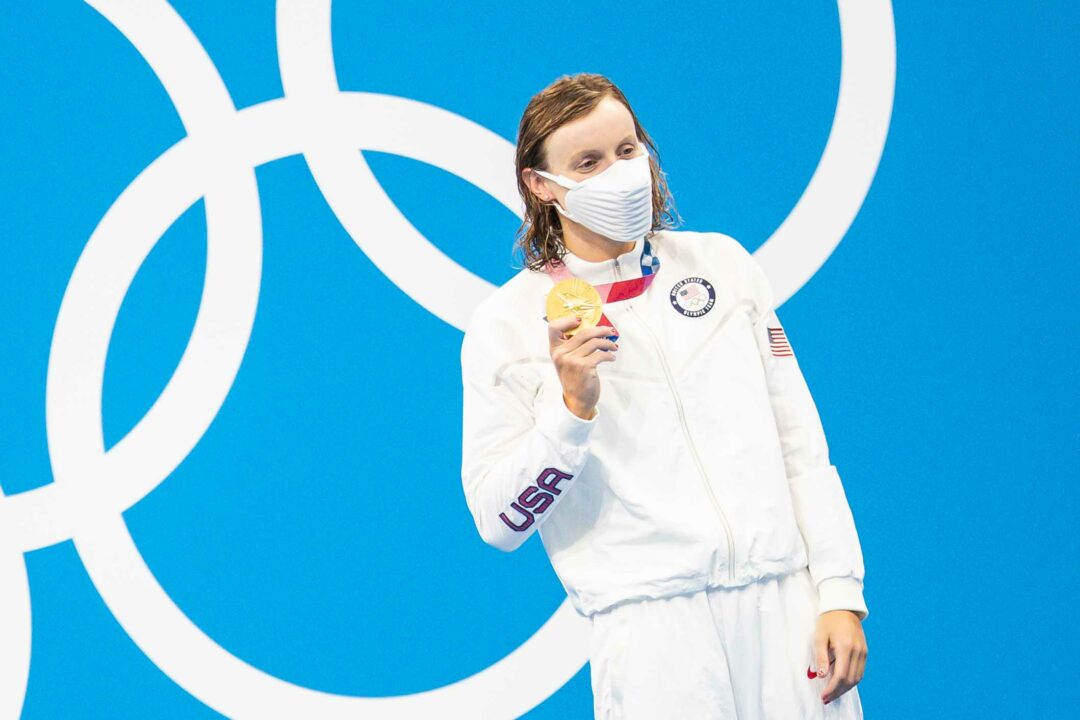 The full list of nominees for the 2022 ESPYs (Excellence in Sports Performance Yearly Awards) has been released, with swimmers being nominated for five different awards. These accolades are presented by TV network ABC every year to recognize individual athletes and sports teams for their achievements from the past year.

More recently, at the 2022 FINA World Championships, Ledecky took home gold in the 400, 800, and 1500 free, as well as the 4×200 free relay. She won her 21st and 22nd World Championships medals at that competition, passing Natalie Coughlin as the most decorated female swimmer in the meet’s history, and becoming the third-most decorated swimmer overall.

Ledecky has been nominated for ESPY awards in the past, being named as a finalist for the 2016 and 2017 Best Women’s Athlete and the 2018 Best College Athlete awards. However, she has yet to win an ESPY.

Caeleb Dressel was another swimmer nominated for an ESPY, being in contention for the “Best Olympian—Men’s Sports” award. He will be competing against 2022 Olympic figure skating singles champion Nathan Chen, track and field Paralympic champion Nick Mayhugh, and Paralympic sled hockey champion Declan Farmer.

Winners for ESPY awards are decided entirely by fan voting, and will be announced on July 20, 2022 at 7:00 PM Central Time on ABC Network. To vote for your favorite swimmers, check out the links below:

Other swimmers who have won ESPYs in the past include Michael Phelps, Missy Franklin, Dara Torres, Erin Popovich, Mallory Weggemann, and the U.S. Men’s 400 free relay from the 2008 Beijing Olympics.

His stroke has gotten progressively worse since 2019.

Given how adamant he was about preferring non-straight-arm freestyle over the years, his switch to the mainly one-sided straight arm makes me wonder if he tweaked (or worse) something in his shoulder that caused him to alter his recovery to avoid pain to make it more straight-arm, rather than an intentional let’s do straight-arm to get the 50 free record and then that causing a shoulder issue. Of course we don’t know if it’s a shoulder issue or that the bathroom stalls were inadequate for changing at Worlds. The other noticeable thing was his relative (for him) lack of hops — just did not get his usual separation from the field. Age or a new knee issue? Sure would be… Read more »

I thought the same thing about the explosiveness off the start. Just didn’t seem to have that pop he normally does.

New training.
New adjustments.
Troy gone.
He needs to talk to him..
I would

And another year older. There’s a reason the slam dunk competition is populated with younger guys.

Neither every sport, nor every event within a sport. is the same. Why are you so obsessed with (mistakenly) labeling guys in their mid-20s as old?

I didn’t realise 6 was the most individual Olympic golds that any female swimmer has. I guess because Phelps has so many I assumed a woman would have more than 6. Egerszegi second with 5.

Phelps has the most overall medals with 28. Thompson, Lochte, Torres and Coughlin are all tied for second with 12.

Spitz, Biondi and McKeon are all on 11.

Then Ledecky, Hall Jr, Schmitt and van Almsick on 10.

Barring major drops in form or injury, it seems likely that Ledecky and McKeon will both jump ahead of 12 and be #2 and #3 after Paris (not sure which order though…)

Dressel has gone dead silence on IG. I hope he’s ok. does anyone seen him after the championship?

The silence on IG isn’t unusual, but surely GoldMedalMel or someone at SwimSwam knows something by now.

I hope he doesn’t read the SwimSwam comments. If you had Covid would you want the whole world to know it?

If you had Covid, who cares? Everyone has had it and it’s not that big of a deal to let people know as much. I’m hoping it’s not a mental health issue, but the secrecy isn’t helping with all the speculation.

Is best Olympian supposed to be voted on by their performance at the most recent olympics or by their performance in their sport in the 2022 calendar year? I believe it’s just the last year given the end of the 1st paragraph, but not totally sure how people usually vote.

If the former, Dressel should win. If the latter, he definitely should not win.

His category in the ESPYs is the “best male Olympian”. That is what it states in the article. The Olympics weren’t in the 2022 calendar year.

I don’t know. But, it’s fair to say that the award involves at least the second half (if not all of) 2021 and either none or the first half of 2022. After all, 2022 still has 6 months to go, and the nominations are already released.

I don’t know, people still call some King for that one time they won Olympic gold.

That one would go to Kyle Chalmers.