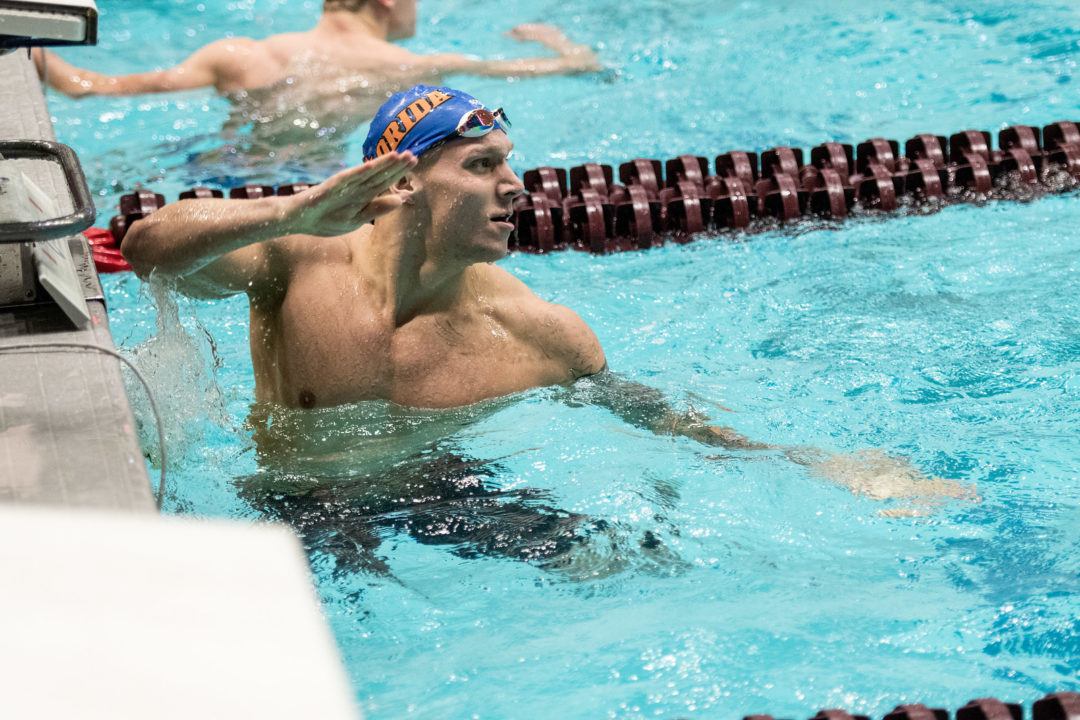 In this video, Dressel analyzes his 200 yard IM from the 2018 SEC Championships when he blew away the American Record, putting up a 1:38.13. Archive photo via Thomas Campbell

World and American Record Holder Caeleb Dressel dropped his sixth video in the “Stroke Dissect” series where he takes us through his thoughts on various throughout his career. In this video, Dressel analyzes his 200 yard IM from the 2018 SEC Championships when he blew away the American Record, formerly held by Stanford’s David Nolan at 1:39.39, putting up a 1:38.13.

Dressel’s other “Stroke Dissect” videos include:

Early on in the video, Dressel gives credit to Cal’s Andrew Seliskar who at the 2019 NCAA Championships posted a 1:38.14 to win the race and nearly take the record for himself. Dressel did not have Seliskar’s splits on-hand to compare to his, so we’ve done it here.

Dressel is not too critical of his start in this race. He notes that his head lifts up a little, but he gets enough spring out of his back leg and his arms keep the energy traveling forward. He says his hips could have been straighter, comparing himself to Gator teammate Mark Szaranek (lane 6), but his splash upon entry wasn’t too big.

At 1:44, Dressel explains the up-and-around path that his arms take as he’s in the air after leaving the blocks, saying that it’s not for show or aesthetic but rather a method of increasing forward momentum and a comfortable technique for him:

“I don’t do my hands like that on the start to look cool, I feel like it offers a lot of momentum if you swing the arms over top, rather than swinging your hands underneath your body like a breaststroke pull-out, that’s why I go over the top. It’s not to look cool–I mean, it looks sweet–but it’s to get everything off the blocks driving forward. I think you can still gain momentum even if you’re in the air floating, so that’s why I do that, it’s just is what is comfortable for me… that’s the reason I do that, it’s not just a show thing.”

After breaking down the start, Dressel allows the video to play through, providing some commentary but saving most until the race video is finished.

Though Dressel’s cross-over turn from backstroke to breaststroke looks fast and effortless, he assures us that it is just as painful for him as anyone else. The oxygen deprivation is necessary, however, since the pull-outs are his greatest strength in breaststroke.

“That back-to-breast turn is brutal, it feels like you’re going to pass out underwater, but you have to take advantage of your strengths and don’t play down to your weaknesses,” Dressel says at 4:21.

At 5:11, Dressel picks apart his butterfly: “I think if I were to redo this, honestly, I could be more aggressive on the fly. You see how, like, just lofty these kicks are right here… and you see how late the second kick is coming in in fly (sic). You see how late this is, this is bad. It’s so, so bad, look how late my second kick is coming in, this is way too lofted, there’s no aggression to this whatsoever.”

Though it’s difficult to think of a 21.03 50 fly as anything shy of “aggressive,” Dressel does make a good point in saying that his stroke is too “lofted,” as in, he appears to be riding along on the power that is generated by his first kick and the forward roll of his shoulders as he goes into each subsequent stroke cycle.

Dressel explains the virtue of a strong second kick and how it helps to keep swimmers flatter in the water, something he thinks matters more in the 100 fly than the 200 fly.

“That second kick needs to come in much, much faster, and that will keep you flatter. Yeah, that second kick, it will keep you flatter on the stroke, I don’t think it’s as good for a 200, I think you resort more to pressing with your chest for a 200 fly–200 fly, not 200 IM–I’m talking 200 fly right here. I think that’s why that second kick won’t work as well for a 2-fly because you resort to pressing with your chest, again, your power, rather than keeping the stroke flatter with bringing in the second kick faster,” says Dressel (5:41 to 6:03).

It would be interesting to get Michael Phelps’ opinion on the role of the second kick in butterfly when swimming the 100 versus the 200. Regardless, flatter is always faster.

At 6:11, Dressel determines that his relaxation in the first 50 was the primary cause of his latent second kick. “Honestly, the fly just looks not really relaxed. Sometimes, you know, the, like, more you try to make a stroke relaxed it becomes not as relaxed, that’s what happened on this fly right here,” explains Dressel.

Dressel continues, saying, “It doesn’t even look like my normal fly, to be honest. I think I should have just let it be fast instead of trying to hold myself back. Yeah, you see how weird the front end looks? I’m not coming in soft at all.”

Going into the backstroke, Dressel shares with viewers his thoughts on his weakest stroke.

“Ah, it looks like I’m taking a bath right here, this is bad,” continues Dressel at 6:55, still critiquing his backstroke.

At 7:00, Dressel tells viewers that his turns are good, and that “I have no complaints with the turns.”

Now into the second half of the race, Dressel delves into the breaststroke, his cross-over turn, and his pull-outs.

“Boom, boom, nailed this turn. This is what I’m talking about, this is where it feels like I’m about to pass out, right here, but you have to hold it, have to take advantage of those pull-outs or whatever strong point it is,” says Dressel (7:13 to 7:21).

Dressel was mostly happy with this leg of the race though.

“I think the breaststroke was great here, I think this is what made this IM fantastic, is this breaststroke and the freestyle, it’s the back-half, it’s not the front half, I gotta clean up the backstroke and the fly, I was trying too hard to keep it relaxed,” Dressel comments (7:27 to 7:36).

At 8:05, Dressel gives viewers further insight into his race strategy and particularly stroke count: “A lot of my races, mainly fly and breaststroke, the biggest thing for me is hitting that stroke count. You gotta be patient. Be patient on those strokes. But I will still say this: I think freestyle and breaststroke are the only strokes with an actual glide in them. There’s a difference between gliding and being patient in a stroke.”

At 8:23, Dressel pokes fun at himself for not doing more kicks after making the turn to freestyle.

Dressel nearly goes off on a tangent at 8:56, dissecting the “gallop” he sees in his freestyle:

“So I got that gallop going on. Don’t even start me on gallop freestyle, I’m gonna save that for a whole ‘nother episode. Yeah, this is, honestly looks bad, if I’m being quite honest. You see how much of my energy is being resorted upwards, I think I’m just panicking ‘cos I’m like ‘oh, I have way too much energy left.’ This looks bad, guys, and that left arm, a lot of it’s driving up and not driving forward, and this is what I call the gallop in freestyle, so I’m gonna pick apart the gallop at a later date,” laments Dressel (8:56 to 9:25).

In what could turn out to be a hot-button topic for coaches, Dressel teases that he will pick apart gallop freestyle and elbow positioning in a later episode, “I have some great stuff regarding high elbow and gallop–I’m not saying high elbow’s good, either, so a lot of people are gonna fight me on this one,” says Dressel (9:28 to 9:35). Color me intrigued.

At 9:50, Dressel begins his closing thoughts, though instead of dwelling on what went well and what could have been better, he chooses to focus on how swimmers should feel while racing and in the moments after finishing a race. From 9:50 to 10:15, Dressel says:

“Great race, guys, it hurt, it hurt really bad. I don’t know if there’s this idea that good races don’t hurt; all races hurt, good or bad. But you notice how when you go a slow time, like, your brain tricks you into thinking the race hurt worse? It’s all mental perspective, guys. I mean, this was a good race and it hurt, it hurt really bad. It’s supposed to hurt, that’s your trophy at the end, if you did a good enough job, put effort into it, it’s gonna hurt, K?”

Dressel continues about the physical pain endured while racing, even when moving at record speeds. Furthermore, he dismisses the myth that taper is the solution to all swimmer problems.

“There’s no magic taper, there’s no magic whatever that’s gonna make a race not hurt, [and] you should want that, you should crave that, you earned that hurt, you went a fast time, you put your body through a lot of hell to get something sweet. So, it’s worth it. Don’t look for that perfect taper and that feel that, ‘Oh, I don’t feel good,’ it doesn’t matter, every race is gonna hurt, that’s just a sorry excuse, don’t wait for that magic taper ‘cos it’s not gonna happen. It happens once when you’re twelve and then it never comes back, so, sorry guys, for the age-groupers watching this: it only hurts worse from here, and this one was one of those. There’s nothing you can do to keep a race from hurting, so embrace it, look forward to it, brainwash yourself into thinking it’s a good thing–but it is,” Dressel explains (10:15 to 10:54).

This is a really good one. I love that his clarity and descriptions are improving as they go one.

Idk if he sees these comments or if anyone who knows him sees them, but something I think would be cool to see would be a look at his ncaa 50s from each year of college. A little bit of dissecting of the first three (since we’ve already got the 4th), but I’d really be interested in hearing what was identified as areas to work on and then some of the specifics incorporated into training. I feel like that info about progression and growth could be gold to current and future swimmers and coaches.

He’s putting these out fast. At this rate, he’ll run out of amazing swims of his to dissect in like a year and a half. Lol.

Compared to his first stroke dissect, Dressel’s come a long way in terms of clarity, precision and presentation with these videos.

Great to see. Hope he continues with this kind of content, it’s super informative and insightful.

*Breaks 200 IM record by more than a second*

He could be a great coach someday