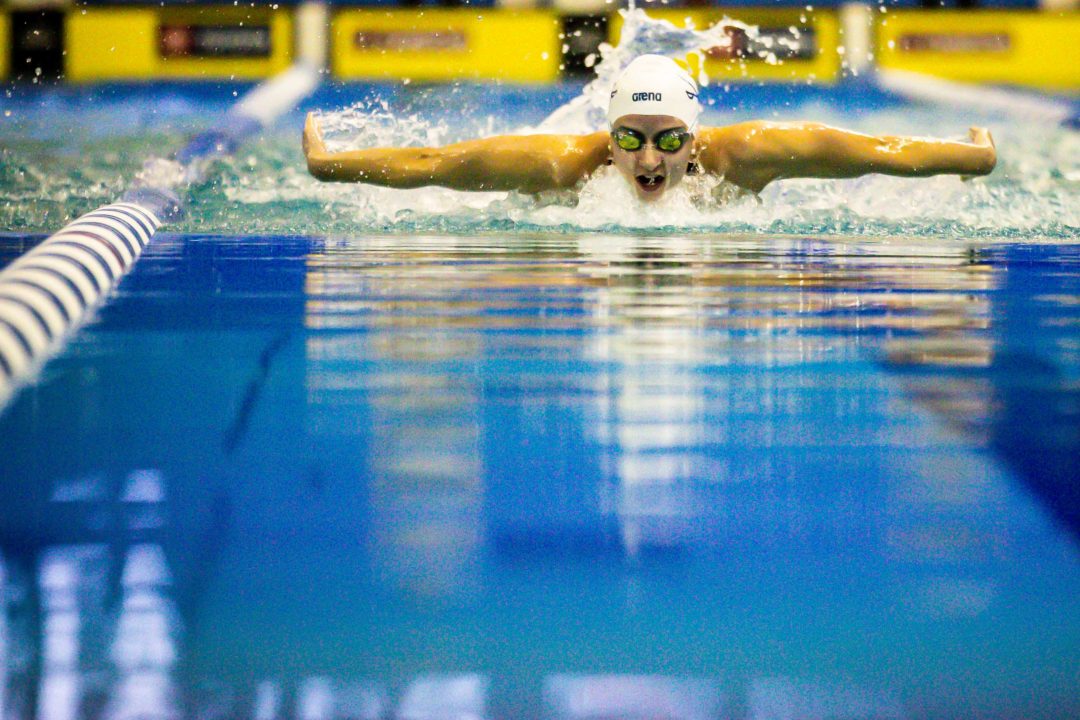 Kate Douglass is now only a quarter of a second away from being the fastest women ever in the SCY version of the 200 IM. Current photo via Jack Spitser/Spitser Photography

Diehl will shift his focus to the ‘A’ final of the 100 back, where he qualified fourth overall in a new best time of 46.40.

Kate Douglass came up big for the Cavaliers, helping win two events, setting two individual school records, and winning her only individual event of the evening with a historic time.

Then came the real fireworks. Douglass had already smoked a 1:51.89 this morning, just over half a second off of her lifetime best, and we figured we might be in store for something special tonight. Sure enough, Douglass threw down a 1:50.92 that moves her up to #3 all-time, behind only Ella Eastin (1:50.67) and Beata Nelson (1:50.79). Douglass is less than 3/8 of the way through her college career, and it’s hard to imagine her not chopping off another quarter of a second at some point in the next two and a half years and taking over the top spot all-time.

Tennnessee’s Bailey Grinter finally stopped UVA’s winning streak with her 22.11 in the 50 free, her 3rd-fastest time ever. Alabama’s Morgan Scott perfectly matched her time from the morning to take 2nd in 22.31, with UVA’s Lexi Cuomo rounding out the top 3 with a 22.47.

There was a little more variety on the men’s side, as each of the three schools came away with at least one win this evening.

Next, UVA swept the top three spots in the 500 free, just as they did in this morning’s prelims. Jack Wright touched first with a time of 4:17.66, followed by Jack Walker at 4:18.34. Daniel Gyenis took 3rd in 4:22.48, recording his second lifetime best of the day in that event.

Great swimming. But also great video coverage. Showing the entire pool, all swimmers and all lanes visible, allowing me to watch the race and not just a close up of a swimmer’s head. I particularly liked the heat sheet capture from the start of each video. Marked in the exact fashion I do my own! I wish this production technique would be sent to the ISL, and Rowdy Gaines before Olympics 2021!

Congrats to Douglas! Beast swim. What a three-headed monster they’re gonna have next year with KT and both Walshes. Hard to see them not sweeping all four sprint relays next two years.

Was hoping for a big breast split tonight from Popov after her 200 IM breaststroke split this morning—fastest in the field IIRC. Would love for her and McSharry to both hit 58s this year.

Could have also used a big 21-relay split from Rumley. Hoping we get to see her in action soon!

So are we not going to address half of UVA’s senior class no longer being on the team?

Yeah I was just going to comment on this. I am sad to see it. A lot of those women had some untapped potential left, especially with no NCAAs last season.

Kate also swam circles and might have done closer to 201 or 202 yards. There’s more there!

And they weren’t rested or shaved. Desorbo effect! Lol