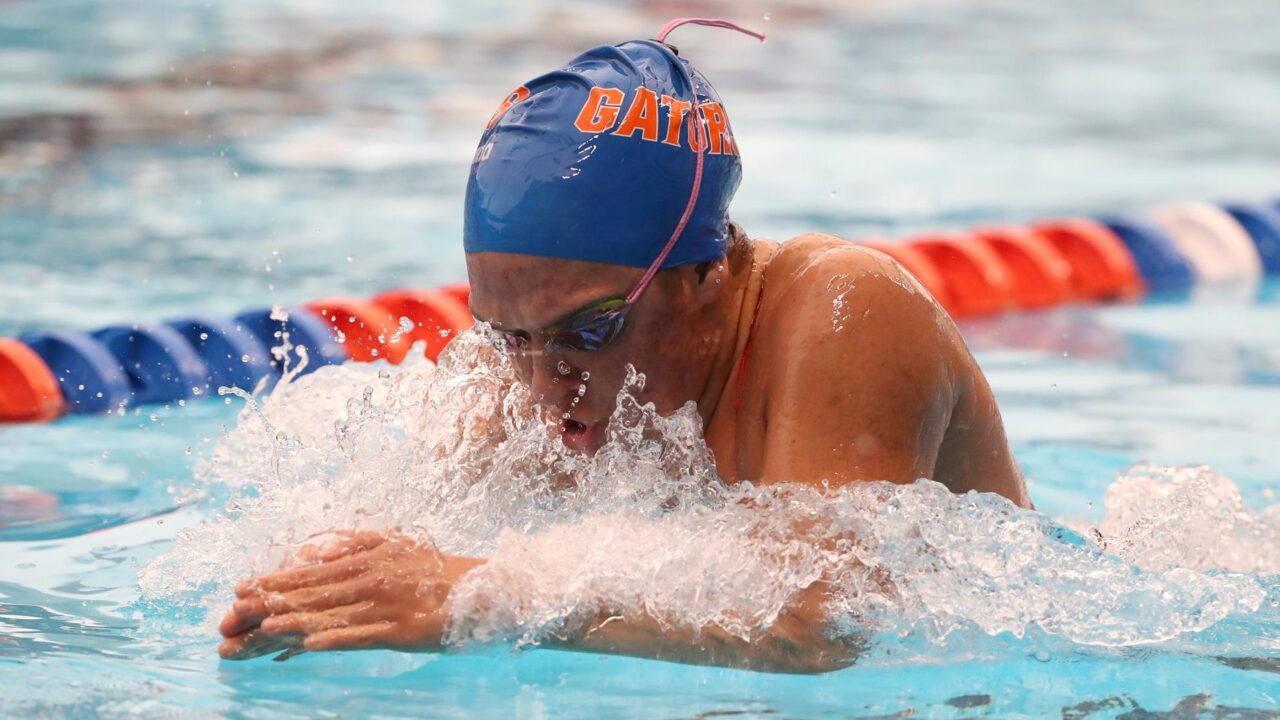 The 1000 free saw a great race, where Florida's Anna Auld clocked a 9:45.17 for the win, pulling ahead of teammate Hayden Miller on the back half of the race. Current photo via Florida Athletics

Florida hosted Tennessee for a combined SEC dual on Saturday, posting lopsided victories in both the men’s and women’s meets. This post features a recap of the women’s meet. For our men’s recap, click here.

The Gators frankly blew the defending SEC champion Volunteers out of the water on Saturday, winning in a stunning 204-96 decision. Tennessee still is without Ellen Walshe, who is still set to return to the team in the winter semester, and Julia Mrozinski, who has yet to compete for the Vols this season but is still on the roster. The team was also without Jasmine Rumley, who is still on the roster but hasn’t raced since the NCAA Championships in March. Regan Rathwell and Summer Smith were more key contributors missing – they both missed the team’s last meet against Louisville as well.

Despite what Tennessee was missing, the first event of the meet, the 200 medley relay, was a thrilling race. Florida ended up winning, but by just 0.05 seconds, 1:39.32 to 1:39.37. Tennessee got out to a lead with Josephine Fuller splitting 24.96 on the lead-off to Katie Mack‘s 25.37 on Florida’s lead-off. The Vols then expanded their lead, as Mona McSharry split 27.45 on breast, while Florida’s Nina Kucheron split 27.88. Talia Bates then essentially cut the gap in half for Florida, throwing down a 23.90 fly split, bettering Emma Carlton‘s 24.22 on Tennessee’s relay. The Vols still held a 0.52-second lead heading into the anchor, but Florida’s Ekaterina Nikonova answered the call, splitting 22.17 to bring the Gators home, catching Tennessee anchor Julia Burroughs (22.74).

The 1000 free saw a great race, where Florida’s Anna Auld clocked a 9:45.17 for the win, pulling ahead of teammate Hayden Miller on the back half of the race. Miller would come in second, swimming a 9:47.95, while Tennessee distance ace Kristen Stege posted a 9:53.13 for third. Florida’s Elise Bauer was also under 10:00 on Saturday, taking fourth in 9:56.91.

The Gators would go on to put on a show in the 500 free, which Miller won in a sizzling dual meet time of 4:45.49. Auld was also under 4:50, coming in second with a 4:49.09. This time, Bauer came in third, touching in 4:51.49, while fellow Gator Kathleen Golding was the fourth-fastest swimmer in the field, swimming a 4:53.98, but had to swim exhibition (not for points) as the fourth-place Gator. Stege officially came in fourth for scoring, but was the fifth-fastest swimmer in the event, clocking a 4:54.04.

Nikonova was also spectacular in the 200 free, speeding to a 1:45.75 to get her hand on the wall first by over a second.

Florida also saw a program record go down, as Maha Amer won 1-meter diving with a score of 350.55. That mark broke the program record of 346.10, which coincidentally was set by current UF grad assistant dive coach Kahlia Warner in 2016. Amer didn’t compete in 3-meter, where fellow Gator Elettra Neroni racked up 339.98 points for the victory.

Tennessee, of course, had their bright spots as well. Mona McSharry, one of the top breaststrokers in the NCAA currently, swept the breast events, starting out with a 1:00.88, which is a very solid dual meet swim for McSharry. She was dominant in the race, posting the top split in the field on both 50s. McSharry then went on to swim a 2:15.07 for victory in the 200 breast.

Interestingly enough, Florida’s best distance swimmer last year (Tylor Mathieu, missed the A final at NCs by one place in the 500) has yet to swim a distance race this season as she’s also the team’s utility breaststroker at dual meets.

If Weyant becomes eligible by championship season, UF could conceivably have three girls (Mathieu, Miller, Weyant) in the A final of the 500 at NCs this year and possibly some in the B final as well.

Can you guys get an update on when all our swimmers are returning? It’s not just Walshe and Mrozinski. Jasmine Rumley is probably the biggest missing piece right now with Kutsch retried. Regan Rathwell and Summer Smith are big too.

Auld is beginning to reach her potential. After finishing 7th in the 25K at worlds this year, she’s now beginning to translate that OW success into the pool. 9:45 in the 1000 mid-season is very elite

Any word on weyant or Pennington?

They will be back…

ouuuu is Tennessee not embarrassed 😭

Not really. The Vols were missing 5 of their best swimmers–including the Swimmer of the Meet at last year’s SEC championship (Walshe).