Dolfin Swim(s) of the Week: Ranking the Gwangju WRs By How Long They’ll Stand 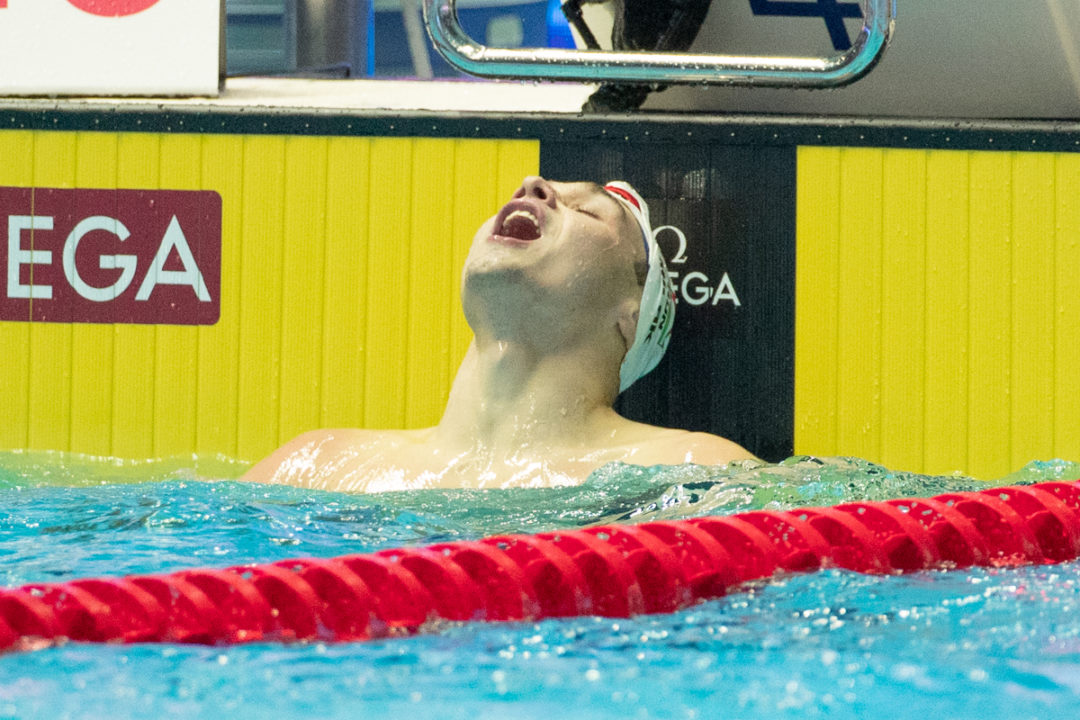 We rank all of the world records from 2019 Worlds - with a twist. We rank by how long we think each one will stand, from the shortest to the longest tenures. Archive photo via “Rafael/Domeyko Photography”

It’s too hard to pick just one. So let’s rank down all of the world records from the 2019 World Championships – with a twist. We’ll rank by how long we think each record will stand, from the shortest to the longest tenures:

An easy one to start with, because this one only lasted about a day. It’s no less impressive, though, as it felt like about 20 men had been chasing this record for years, and Wilson was just the second man since 2012 to go as fast as 2:06.67. It’s also important because men’s breaststroke had previously been a weakness for Australia, but is now coming around as a serious strength.

This record could go down again this week. Seriously. Smith is only 17 and she’s improving fast. She only had one go at the 100 back at Worlds, and it’s possible she’s spotted an area or two to improve, the way you’d typically iron out wrinkles between prelims and finals.

The 200 back seems a tiny bit less likely to fall again this week, as Smith did get three cracks at the event at Worlds and went backwards a little bit in the final. Still, it’d hardly be a shock to see a young swimmer like Smith hit a big swim in-season next year, and this record is absolutely on high alert come U.S. Olympic Trials.

Peaty has been known to come up with a big swim domestically – he first broke this record at British World Champs Trials in 2015. Without a 50 breast at the Olympics, Peaty should be 100% focused on the 100-meter distance. And it’s only a small factor, but since we are ranking these events head-to-head, there’s a good chance Peaty breaks his own record in heats or semis in Tokyo, while some other events are more likely to fall later in the program during finals.

Now we’re getting into the records we don’t anticipate falling before Tokyo. It’s doubtful any world record contending countries will go after a full relay before the Olympics. But with Australia opening the floodgates in this 4×200, it’s highly likely it falls again in 2020. To whom? We don’t know yet. The Americans should have a real shot, especially if Katie Ledecky is back to 100% and their depth steps up in the Olympic year. But the Australian women have quite a relay team, and it probably only gets stronger if Shayna Jack‘s looming doping suspension is short enough to keep her in Olympic roster contention.

Another relay record that’s likely to fall next summer. Smith and Manuel are both clearly improving. King and Dahlia went a little backwards in 2018, but not enough to counter Smith’s improvements. Why rank this one above the 4×200? Because the women’s medley relay comes after the women’s 4×200 in Tokyo.

Like Chupkov’s swim, Milak’s constituted an amazing drop from his previous best. Milak is just 19, so big drops aren’t quite so out of the ordinary. But there are a couple reasons to rank this record as a relatively lower probability of being re-broken next year. First: Milak will turn 20, and it’s not fair to expect the same insane improvement curve that most elite athletes have as teens to continue. Second: Milak mentioned that he’ll take a bit of a break from butterfly and work on his versatility. It’s very possible that a talent like Milak could next year be a multi-event medalist between free and fly, and could help Hungary have a historic showing on free relays, while also regressing a tiny bit (but still winning gold) in his bread-and-butter 200 fly.

Hear us out: no one is getting rich predicting the imminent decline of Dressel. (Last summer proved that). But Dressel, like Milak, might spend the coming year fleshing out his event lineup rather than laser-focusing on one race. This summer, Dressel had reason to put a premium on butterfly, with two medal opportunities, a chance at redemption from his 2017 50 fly medal miss, and a pretty legendary Michael Phelps world record just ahead of him. 2020, though, lowers the impact of butterfly relative to other strokes, as there’s no 50 fly in the Olympics. Dressel may put a premium on freestyle over the coming year, trying to get the super-suited 50 and 100 free records that narrowly evaded him this year. It’s also possible Dressel tries to improve his 200 free in search of another relay medal (or just to shore up the American 4×200 free relay depth, which looks precarious after 2019). Or, if Dressel really wants to Phelps it up, he may be looking for a couple outside events to add to his likely 6 events: 50 free, 100 free, 100 fly, men’s medley relay, mixed medley relay, mens’ 4×100 free relay. Adding the men’s 4×200 relay, the individual 200 free or even the individual 200 fly could offer Dressel a chance at 7 or 8 medals in the chase to replace Phelps as Team USA’s powerhouse. Diversifying a lineup could add total medals, but could make Dressel more fatigued by the time the 100 fly rolls around on day 6.

This is probably an anti-climactic end to this list. Oh well. The mixed free relay isn’t included at the 2020 Olympics, and it’s unlikely any nation will really gear up for it at any point. This record is probably safe until 2021.

LOL, have to love the anticlimactic #1.

Ol’ Longhorn gettin roasted and toasted by SwimSwam at #2

All fun and games, but reporting should be objective. I don’t have a stance on the issue, but taking potshots at a particular commenter is beneath a reputable swim website.

Everything has to be perfect for him to win 7 in Tokyo. I’m not doubting Dressel in any way, but let’s look at what took Phelps to win 8 in Beijing: that Lezak split, the 100 fly magic, swimming with goggles filled and still win…. Dressel might be in the shape of his life come Tokyo, but the chances of ALL circumstances coming together in favor of the USA just isn’t likely

Both 4x100m there is no mixed relays at Olympics Thank god