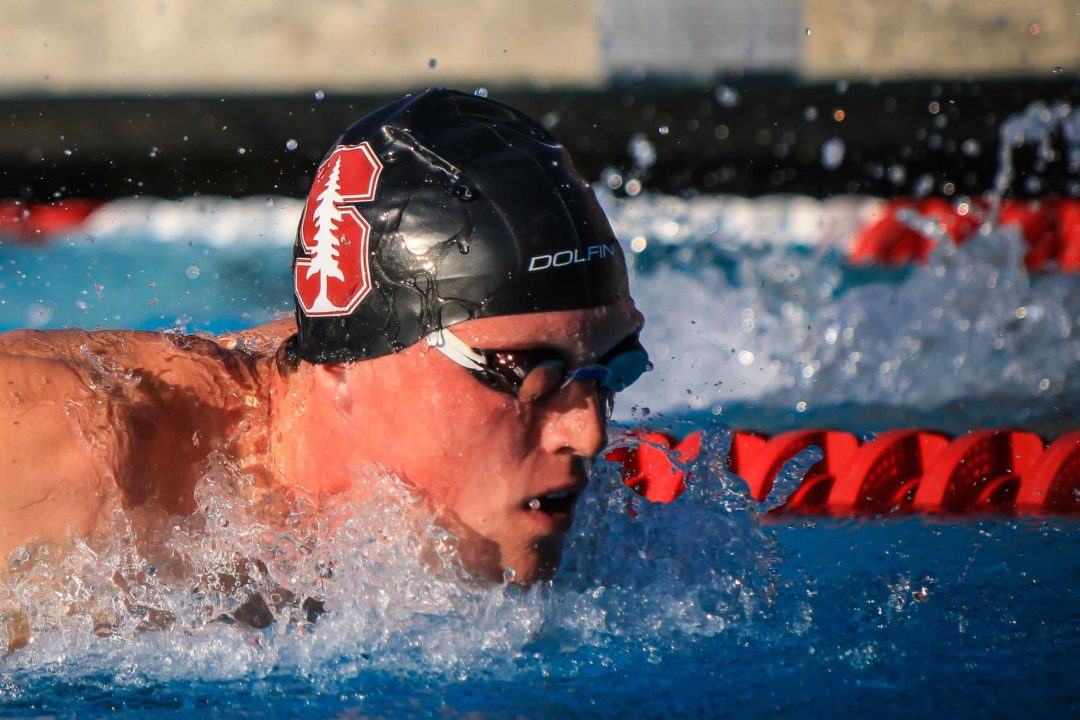 After facing Cal on Friday, the USC men went into day 2 of PAC-12 rivalry with their dual meet against the Stanford men. Stanford defeated USC 196-93, along with exhibitioning non-winners in 5 events.

The 400 free relay had one of the tightest battles of the meet, with USC and Stanford neck-and-neck throughout the whole race. Patrick Mulcare (48.28 BK), Carsten Vissering (52.07 BR), and Alex Valente (47.04) gave USC a decent lead over Stanford going into the last leg. However, Stanford senior Abrahm DeVine was ready to challenge USC’s free anchor Nikola Miljenic. Miljenic (43.95) was able to hold off DeVine’s 43.17 split to give USC the narrow victory by 0.07 with a 3:11.42.

The 100 back was the closest race of the meet, with Stanford’s Patrick Conaton and USC’s Patrick Mulcare swimming within hundredths of each other. Conaton and Mulcare took their first 50s out in 23.89/23.82, and came home in 24.66/24.74, respectively. Yet Conaton had the one-hundredth advantage over Mulcare to take out the USC swimmer 48.55 to 48.56.

USC will be in action next on February 23rd against Utah while Stanford will have their turn against Cal on the same day.

I think you mean 4Med at the top of the page

Nah, I think Salo finally realized that you have to swim a bit tired at dual meets in order to have something to taper off of at the end of the season. They used to look lights out every meet but then barely drop at the end of the year. Hopefully that has changed.

I think Salo does a pretty decent job developing his swimmers. He has no depth due to the high cost of attendance. If Sancov could break out at NCAAs it would do wonders for his high school recruiting. Right now he seems to do better attracting the foreign swimmers.

Women get 14 full rides. I think you can field a pretty good ncaaa team on 14 full scholarships. Just saying. The men have 8. If you make good choices on recruiting then 8 goes a long way. Stanford is expensive and they seem to do all right!

That, and tuition that’s actually a little cheaper than USC, helps make those 14 scholarships go a long, long way.