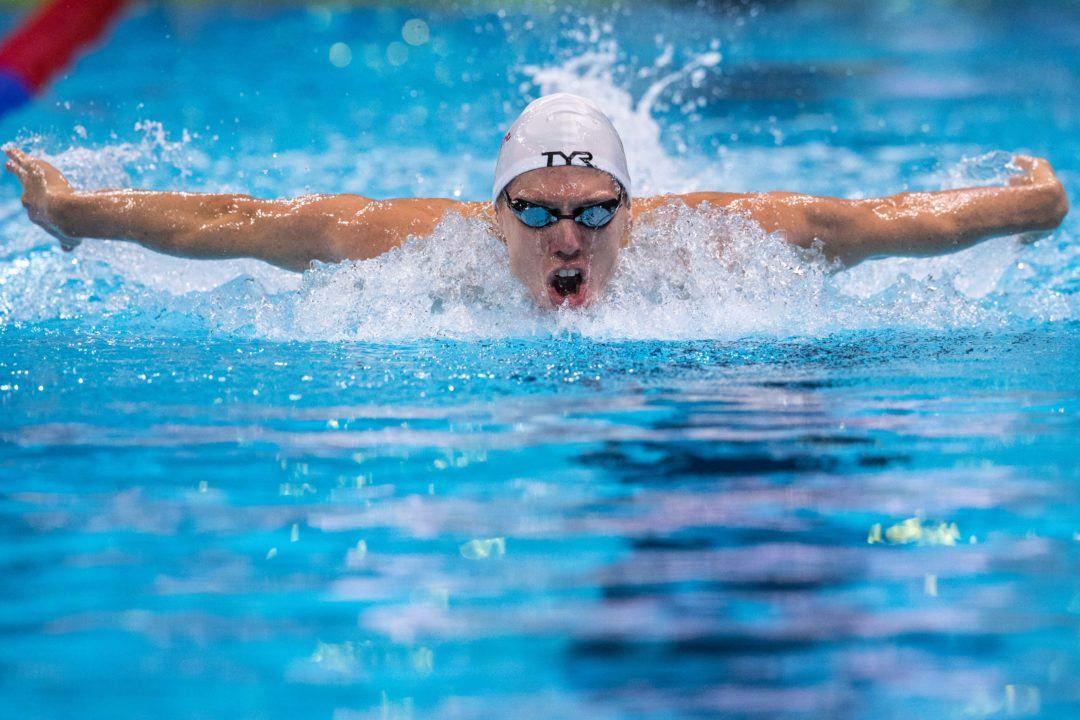 His winning time of 4:13.11 was a new lifetime best by over 2 seconds, and well under the qualifying mark of 4:17.88. Desplanches is now the 9th fastest 400 IMer in the world this year. Archive photo via Mike Lewis/Ola Vista Photography

The 2017 French Elite Long Course Nationals continued tonight in Strasbourg with day 2 finals. Swimmers gathered to compete in the men’s 200 free, 400 IM, and 100 breast, while the women competed in the 200 fly, 50 back, and 1500 free. Read on for highlights from today’s finals session.

In the men’s 400 IM, Jeremy Desplanches made a huge drop from his prelims swim and blew away the Swiss National Record. His winning time of 4:13.11 was a new lifetime best by over 2 seconds, and well under the FINA A cut. Desplanches is now the 9th fastest 400 IMer in the world this year.

The French added another member to their World Championships roster after the women’s 1500 free final. Aurelie Muller dominated the race, clocking in at 16:24.34 to win the gold and dip under the standard of 16:25.04.

A tight race in the men’s 200 free saw Jonathan Atsu pull out the win over international veterans Jodan Pothain and Clément Mignon. Pothain had the front-end speed, but Atsu was able to run him down, capturing the gold in 1:48.12 ahead of Pothain’s 1:48.66. Mignon (1:49.30) wound up just shy of the podium, placing 4th behind Lorys Bourelly (1:48.83). None of the men were able to qualify for Worlds in the event, as the French standard is a 1:47.15.

Texas A&M-based Beryl Gastaldello and Mathilde Cini were well under the FINA A cut in the 50 back, but a couple tenths shy of the French qualifying standard. Gastaldello hit the wall in 28.21, followed by Cini in 28.43. The French standard in the event is a 28.01.

Lara Grangeon just barely missed the French qulifying standard for Worlds in the 200 fly. Grangeon hit the wall in 2:09.35, finishing nearly 3 seconds ahead of silve medalist Sharon Van Rouwendaal (2:12.31). That was .14 shy of the standard, which stands at a 2:09.21.

Also winning a gold medal on day 2 was breaststroker Théo Bussière. In the 100 breast, Bussiere churned out a 1:00.62 to beat the field by over a second. His winning time was a few tenths short of the 1:00.26 set by the French as their Worlds qualifying standard.

Desplaches is from Swiss. He had beaten his Swiss 400IM récord.

French swimming is in a terrible state… Years of a few stars masking huge holes has finally come home to roost.

We know the state of French swimming right now. After more than a decade of not normal things it’s back to normal and probably to anonymity like before 2004. Most of our stars have gone. I’ve always said they were the trees which hid the forest. But at least it has put France on the swimming world map. So either it’s back to anonymity for a long time or it’s just a tough moment but during this moment the generation of kids which has been inspired in the last decade needs time to grow and to improve and at the end a new team will be rebuilt for 2024/2028. It will take time and we must help these new hopefuls… Read more »

But it can’t prevent him from crying when I see a 4.13 swum at French nationals in my favorite event, the 400 IM . . . and of course it’s not made by a French swimmer! 😥
Our best guy in 4.23.99. 😥 😥 😥 😥 Why? Why? Why? Why? Why that structural historical disaster in IM events?
Desplanches’ coach is a French coach, former coach of Camille Muffat and Yannick Agnel, one of the best coaches in the world, Fabrice Pellerin. So it’s not a question of coaching.
Why in the last 100 years we have not been able to produce good 400 IM swimmers?