Dean Farris on Swimming 100 Back: “I guess now it looks like a smart move” (Video) 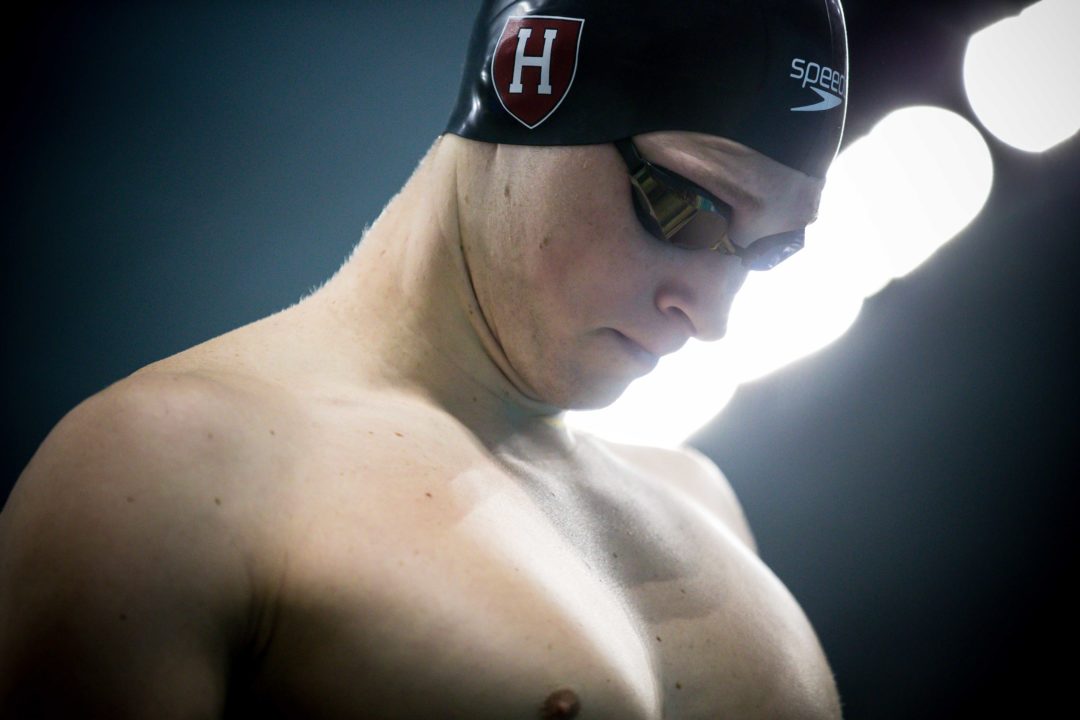 Farris held on for the win in 43.66. That’s shockingly just two tenths off the American record set by Ryan Murphy in 2016 Current photo via Jack Spitser/Spitser Photography

It was a thriller of a 100 backstroke, with Harvard’s Dean Farris and NC State’s Coleman Stewart becoming the second and third men ever under 44 seconds. Farris went out like a rocket, and though Stewart closed hard on the last 50 (and the last kickout in particular), Farris held on for the win in 43.66. That’s shockingly just two tenths off the American record set by Ryan Murphy in 2016. Since that time, no one else has been within six tenths of that record.

Stewart closed in 22.60 to go 43.98. He becomes the third-fastest performer all-time in what’s been a stellar night for him. Stewart earned two NCAA runner-up honors tonight with a tough 100 fly/100 back combo.

Grand Canyons’ Mark Nikolaev went 44.33 and should move to #5 all-time in the event, leapfrogging Texas’s John Shebat, who was 44.35 two years ago but hasn’t bettered that time since. Shebat was fourth in this heat at 44.71 as the top four swimmers are among the six fastest ever to swim the event.

Cal’s Daniel Carr, who had to earn his spot in this heat through a re-swim after a start wedge was errantly left in his lane in prelims, was seventh in 45.21. Georgia’s Javier Acevedo rounded out the A heat in 45.24.

Definitely front-runner for swimmer of the meet.

I’d say it’s gotta be Seliskar. Hard to give it to a guy who might only get one win

Yeah but the 200y American/NCAA record has to count for something. It’s the single best swim of the meet so far. I’d say if Dean wins the 100y free he should deffo win swimmer of the meet. Otherwise, yeah, probably Seliskar.

It’s not about the wins, it’s about sending a message.

I’m with that. Two swims that were really shots across the bow in an otherwise relatively weak year.

A win in the 100 free would nail it down, but Seliskar is having one of the best performances in history, too.

Great meet, but not one of the best in history. He hasn’t even set an individual record. Close on the IM, but over a second slower on what’s supposed to be his new signature event, the 200 free, and would have been a distant second in that had Farris swum it. Maybe he’ll get a record in the 200 breast. Wins 3 and has some good relay splits, then maybe top 10 all time, but I’d say weakest of the history of triple event winners, because he dodged the speeding train Farris in the 200 free.

I don’t see seli touching licons 147.9 that race was ridiculous

Whenever I see Dean https://youtu.be/7or_OOiXVg4