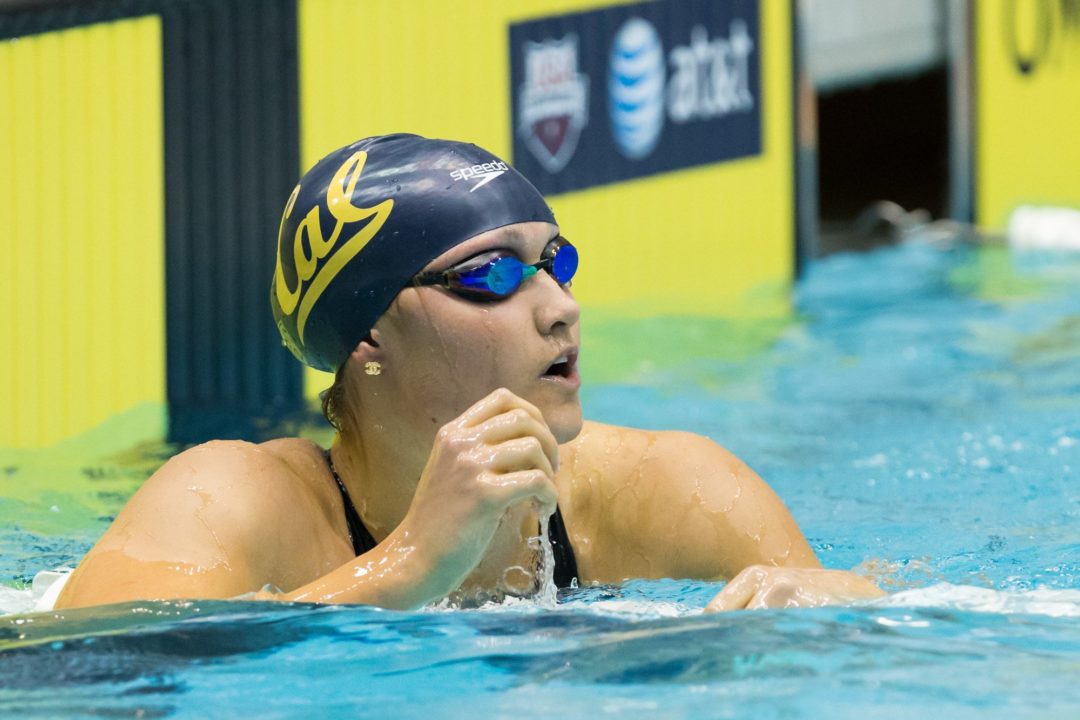 Missy Franklin stole the show in the 200m backstroke throwing down a 2:11.75 to take the top seed over teammate Elizabeth Pelton. Pelton touched in at 2:13.11 to take the second seed. The two Cal teammates really separated themselves from the rest of the field; third seed Melanie Klaren who's also a Cal swimmer was over two seconds behind Pelton in 2:15.22

Day two of the Mel Zajac International began today, and the prelims session made way for what should be a great finals session tonight.

Missy Franklin stole the show in the 200m backstroke throwing down a 2:11.75 to take the top seed over teammate Elizabeth Pelton. Pelton touched in at 2:13.11 to take the second seed. The two Cal teammates really separated themselves from the rest of the field; third seed Melanie Klaren who’s also a Cal swimmer was over two seconds behind Pelton in 2:15.22. Brooklynn Snodgrass from the Cascade Swim Club was just behind Klaren in 2:15.31. Dominique Bouchard from Oakville grabbed the fifth spot in 2:15.71. Genevieve Cantin and Hilary Caldwell took the seventh and eighth seeds respectively, look for them to be major factors as they sit eighth and 14th in this years current world rankings.

The womens 200m backstroke is an event which Canada has a lot of depth; mix that with some of the talent at Cal and this should be quite a competitive final.

After grabbing the top seed in the 50 backstroke last night, Russell Wood came back this morning to throw down a 2:05.78 and do the same thing in the 200m backstroke prelims. He has a comfortable lead after this mornings prelims and should be the definite favorite going into finals. Look for up and coming freestyle sprinter from the Cascade Swim Club Yuri Kisil to possibly make waves tonight as he grabbed the fourth seed this morning. Also swimming well as of late is seventh seed Evan White who just qualified for his first international team a few weeks ago.

Kierra Smith who battled with Tera Van Beilen at the Canadian trials a few weeks back is going to make tonight interesting after posting a 1:12.43 to take the top spot heading into finals. The final should be a close one as the top seven seeds are all within sixth tenths of each other. Van Beilen grabbed the second spot in 1:12.74, Fiona Doyle the third in 1:12.77, Tianna Rissling the fourth in 1:12.78, Erin Stamp the fifth in 1:12.89, and Martha McCabe who’s recovering from an injury that restrained her from swimming breaststroke for most of the season grabbed the sixth seed in 1:12.94.

Richard Funk took the top spot in the mens version of the race following taking the top spot in the 50m breaststroke prelims yesterday. Funk swam a 1:02.38 to grab that spot. At trials, Funk swam almost an identical time in prelims as he did in finals so it should be interesting to see what his race strategy will be for tonight. Ashton Baumann will also be in the final and if he can shave considerable time off his prelim swim of 1:06.02 he should be a big player in this race.

Missy Franklin will have quite the battle with a few Canadians tonight as she took the second seed in the 200m freestyle prelims. Samantha Cheverton took the top spot with a 2:02.03, just 0.41 seconds faster than Franklin who already swam a 200m backstroke this morning. Alyson Ackman, Heather MacLean, Amanda Reason, and Tabitha Baumann will also be in the final to round out a fairly quick field. The real battle should take place between Cheverton and Franklin tonight, Franklin most likely being the favorite if she has enough energy after her 200m backstroke; she has shown in the past that she can take doubles considerably well.

Stefan Milosevic who swam well for Canada at the Charlotte Grand Prix swam a 1:52.60 this morning to lead the charge in the mens 200m freestyle. Club Wolverine swimmer Geoff Cheah grabbed the second seed in 1:53.42 after an impressive night yesterday. Keegan Zanatta, Aly Abdel-Khalik, Alec Page, and Jeremy Bagshaw will all be in the final and should be able to make an impact on the race. There’s no clear favorite going into tonight, so it’ll be a competitive race from start to finish.

Caitlin Leverenz led the field in the 400m IM with a 4:48.95. Following Leverenz was Canadian freestyle swimmer Brittany MacLean from Etobicoke in 4:50.38. MacLean usually sticks to the freestyle swims so it should be interesting to see what time she can throw down tonight. Last night she won the 800m freestyle negative splitting the race. MacLean dropped 6.89 seconds off of her entry time in this mornings swim.

Celina Li and Marni Oldershaw were the only other two swimmers to dip under the five minute mark, touching in at 4:51.04 and 4:53.17 respectively.

Mack Darragh swam a 4:33.80 to head into tonights finals as the top qualifier int he mens 400m IM. He was followed by Etobicoke’s Tristan Cote, who had a great CIS Championships, in 4:34.38. The favorite going into the final is most likely Luke Reilly who showed that he’s one of the top contenders in Canada at trials a few weeks ago when he placed second just 0.06 behind national champion Alec Page in the mens 400 IM. Evan White who swam a great 200m IM at trials will also be in the final, qualifying fifth in 4:38.48.

If Swimming Canada does a live stream of finals it will be found here, there has been no clear schedule announced yet.

Wait, that girl Franklin from Cal also swims the backstroke?