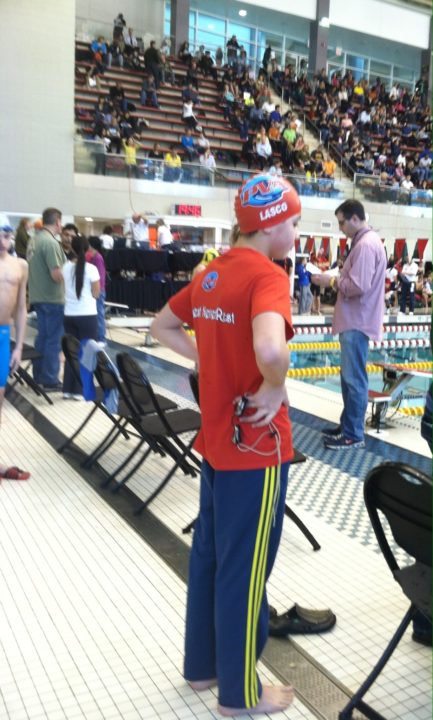 Our next installment of the training spotlight series stays in New Jersey where we're looking at another rising young backstroker and his training group. Archive photo via Tim Binning/TheSwimPictures.com

As new training systems and coaching philosophies have become a hot topic among SwimSwam commenters, we’ve decided to take a deeper dive into the specifics of how some of the more successful athletes at various levels are conditioning themselves. A big thanks to Pleasantville coach Dimitar Petrov for taking the time to talk with SwimSwam about his training philosophy and even sharing some of his go-to sets.

Our next installment of the training spotlight series stays in New Jersey where we’re looking at another rising young backstroker and his training group.

Destin Lasco is a National Age Group record-breaker from Pleasantville Aquatics in Pleasantville, NJ. Coached by Dimitar Petrov, Lasco is one of the top backstrokers in 11-12 history.

Pleasantville seems to be a more “traditional” club when it comes to volume, compared with the short-distance, race-pace systems gaining some notoriety lately. Petrov says swimmers in Lasco’s group average about 6000 to 7000 meters a practice, going as high as 10,000 on Saturdays.

“The simplest way to put it is ‘How much can you do for 2 hours of training?’,” Petrov says.

Petrov, who grew up in Europe, isn’t a stranger to meters swimming, but he was quick to note that training SCM is a matter of necessity for Pleasantville, not a purposeful choice. A majority of the pools in New Jersey were built in short course meters, Petrov says, so finding pool space in non-metric pools is difficult.

One of the major training pieces that Petrov emphasizes are underwaters, but with a very race-specific twist.

“You can only stay underwater for the first 15 meters off the walls,” Petrov says, so that’s what Pleasantville trains. The focus is on getting swimmers to kick out to 15 meters off of every wall during a main swimming set, rather than spending time doing specific underwater kicking sets that work more than 15 meters.

“I believe if you can maintain 5 kicks off each wall in a set of 5 x 200 Backstroke, it would be more valuable than 8 or more 25 underwater swims,” says Petrov.

Though Petrov says he tries not to repeat test sets too many times, he did share a few of Pleasantville’s “staple” sets that give some insight into the team’s specific training.

Set #1: 100s from the blocks with results graphed

Petrov and the coaching staff average each swimmer’s times by sets of 5 and graph those groups out to discuss with the athletes.

“I am not sure if there is any scientific meaning of this particular set,” Petrov says, “but what I am trying to see is when the swimmers start regressing.”

Lasco swam this set in February, just a few weeks before he would go on to break all 3 backstroking NAG records at the Middle Atlantic Junior Olympics. Lasco descended his sets of 5 down to 1:03s by the end of the set, according to Petrov.

“I knew at this point that he would finish strong in all of his events at finals,” said Petrov of seeing how his swimmer fared on the test set.

Pleasantville does a similar set of 15 x 100 with a bit more rest, putting the interval at 3:00 and continuing to break up the set into 5s and average the groups.

This is a good example of Pleasantville’s emphasis on volume. Hard-core swim fans might recognize it as a modified version of the “Erik Vendt” set, which pairs 400 IMs with 500 frees.

Lasco has competed the set holding 4:40s on the freestyle and 5:00s on the IMs, Petrov says.

Want to know how your favorite young swimmer trains? Have an idea for another club or swimmer to profile? Leave your suggestions in the comments section!

Thanks for that spotlight!

Destin Lasco is my favorite American age group swimmer of the moment on the boys’ side.
It’s crazy to read so often there are not many long course pools in USA!
Mr Lasco has great underwaters but also a great technique for such a young swimmer.
Can’t wait to watch him next summer in long course.