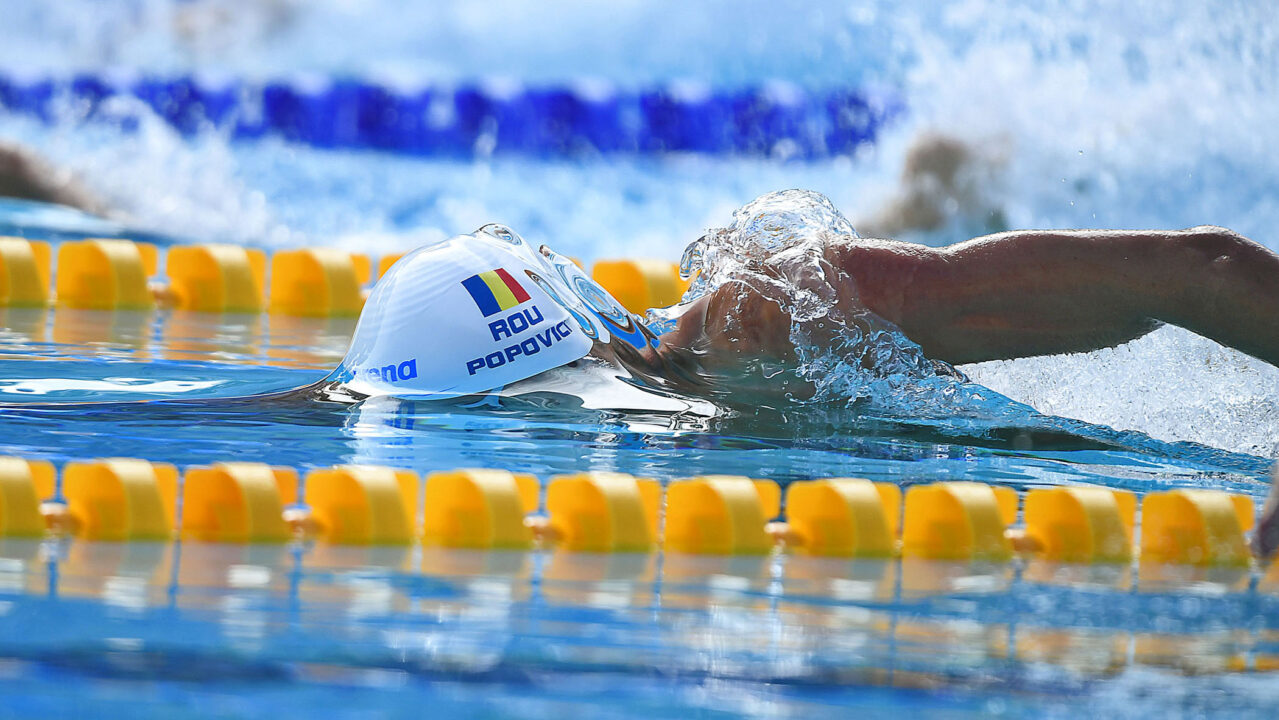 David Popovici has already made a statement at the 2022 World Junior Championships in Lima, Peru. Stock photo via Fabio Cetti

Not only is that yet another impressive prelims swim by the 17-year-old, it also absolutely shattered the World Junior Championship Record in the boys 100 free. The previous record stood at 48.33 and was held by Russia’s Ivan Girev from the 2017 World Jr Champs. It will be interesting to see if Popovici leads the relay off again tonight, and if he’ll be even faster if he in fact does. Either way, this seems to answer the question of whether Popovici will still be on top of his game in his 4th championship meet of the summer.

Here is a split comparison between Popovici’s time this morning, his WR swim from a few months ago, and the previous WJ Championship Record held by Girev.

Popovici almost matched his WR opening split this morning, splitting just 0.06 seconds off it. He was a bit slower coming home, however, splitting 24.57 to his 24.12 on his WR swim. Comparing Popovici to Girev’s previous record swim, he was faster on both 50s, significantly so on the 1st 50.

Why doesn’t Poland have a men’s relay. They have the Chmielewski brothers and Masiuk. They probably could win due to weakened field.

Who wins our hearts? Chlorine daddy or Dean?

Daddy for me all the way!

47.37 would be a national record in all countries of the planet save a fistful. And he swims it in the heats of a junior championships. Insane.

and romania of course lol

he has a shot to help lead his boys to a world title tonight. 46.7 incoming

Looking forward to seeing how his teammates split. These kids will be the relay in 2024 and pull a Netherlands from 2004.

Do you mean South Africa? The Dutch women didn’t win until 2008.

Netherlands went from 4th to 2nd with PVDH anchoring.

Popo is gonna do like 12 swims sub-48 this summer alone. Incredible

this was his 11th I think

He could feasibly be only 2 swims short of Dressel’s 24 sub 48 swims after this meet but Romania would need to reach the mixed free final (doable with how weakened this meet is) and not go easy in the 100 heats.