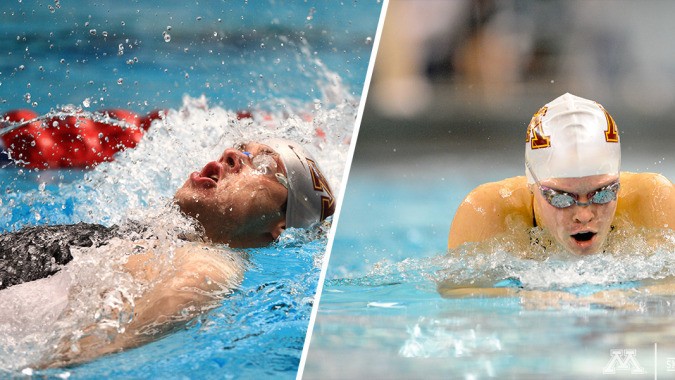 Olympic champion David Plummer and NCAA champion Haley Spencer will join the Minnesota Aquatics Hall of Fame this weekend at the team's alumni meet. Current photo via University of Minnesota

Plummer was a 2008 grad for the Golden Gophers, earning 14 All-America honors and a pair of Big Ten runner-up finishes. His most notable results, though, came well after graduating. Plummer was a heartbreaking Trials third in 2012, missing the Olympic team despite putting up a time that would have won silver in London. But he continued training at Minnesota for the next Olympic cycle, breaking through to qualify for the 2016 Olympic team. In Rio, he won bronze in the 100 back and gold in the 4×100 medley relay. He’s also a multi-time national champion and the U.S. Open record-holder in the 50 back.

Spencer competed collegiately from 2009 to 2013, becoming Minnesota’s fifth-ever NCAA champion on the women’s side. She took the 200 breast title in 2011, and also won three Big Ten titles and set a Big Ten record. Spencer was also the runner-up at U.S. Nationals in 2011 and later that summer took silver at the Pan American Games in Mexico. Both swimmers will enter the team’s Hall of Fame on Friday at a ceremony during the program’s alumni meet.

The full University of Minnesota press release is below:

MINNEAPOLIS – Gopher swimming and diving alumni David Plummer and Haley Spencer will find themselves inducted into the Minnesota Aquatics Hall of Fame on Friday, Sept. 29 in conjunction with the alumni meet.

Minnesota’s Aquatic Hall of Fame was started in 1984. The aim of the Hall of Fame is to give recognition to outstanding alumni who have contributed to the University’s program. Another purpose is to provide role models for current Golden Gopher student-athletes. A major emphasis is placed on academics, and all members have achieved excellence both academically and athletically.

The Aquatics Hall of Fame induction will take place at the Jean K. Freeman Aquatic Center on Friday night with a scheduled start time of 6:30 p.m.

Haley Spencer (2009-2013) was the 2011 NCAA Champion in the 200-yard breaststroke and NCAA runner-up in 2012 and 2013.  Spencer, a three-time Big Ten champion and record holder in the 200-yard breaststroke, was also a Big Ten champion in the her senior year in the 100 breast, 200 medley relay and 400 medley relay. The seven-time All-American also enjoyed a decorated career with USA Swimming. She was a 2011 U.S. National Silver medalist in the 200-meter breaststroke, while also taking home silver at the 2011 Pan American Games.

David Plummer spent his swimming career at the University of Minnesota between 2005-08. The 14-time All-American claimed honors throughout his four years in the 100 back, 200 back and 400 medley relay. Plummer in the Big Ten earned five bronze medals and two silver medals.  Besides being a Gopher, Plummer swam at the international level representing the USA. The multi-time USA Swimming national champion is the current U.S. Open Record holder in the 50-meter backstroke at the U.S. Nationals and World Championship trials.  Of his most decorated awards are his bronze medal finish in the 100 back and gold medal in the 400 medley relay at the 2016 Olympic Games.