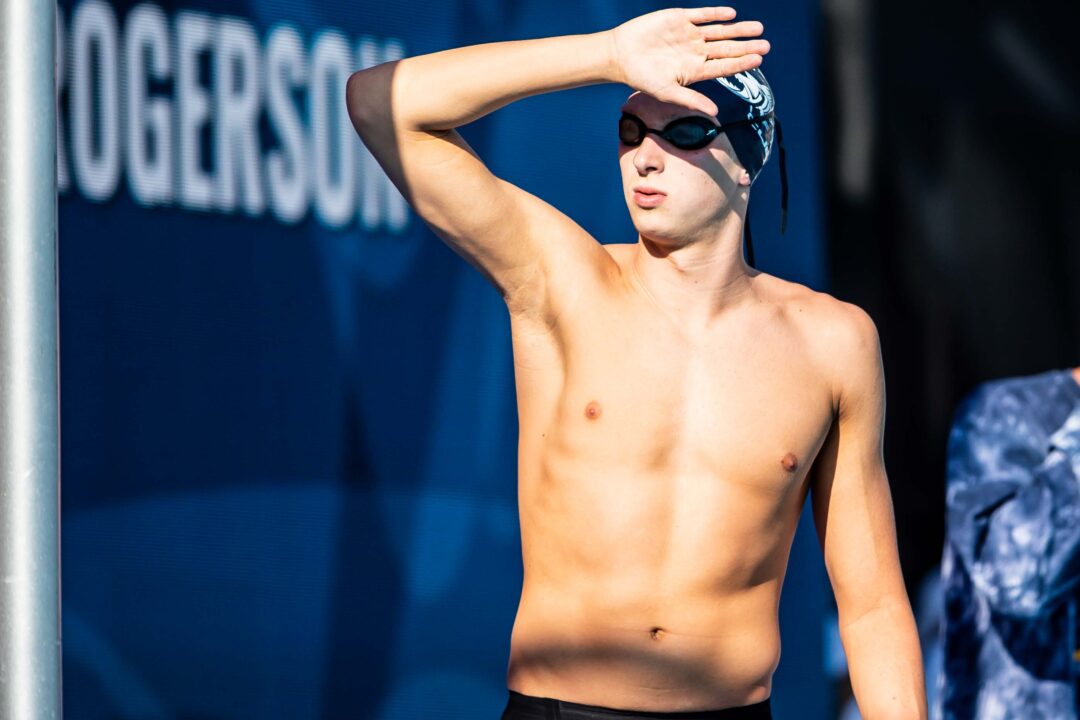 On the final day of the Australian SCM Champs, David Johnston won the men's 1500 freestyle by over 25 seconds, posting 14:22.77 and becoming #3 U.S all-time. Archive photo via Jack Spitser/Spitser Photography

After winning Duel in the Pool, a handful of American swimmers stuck around Sydney to compete in the Australian Short Course Meters Championships. Here’s what they got up to on the final day of competition.

Rising University of Texas junior David Johnston won the men’s 1500 freestyle, blasting 14:22.77 to win the event by over 25 seconds. The swim rockets him up the list of fastest American performers, putting him third behind only Connor Jaeger. Jaeger’s American record of 14:19.29 has stood since 2015.

Johnston has had quite a week in Australia. Duel in the Pool was his first time representing the U.S. internationally and this is his first short course meters meet but he wasted no time establishing himself. He set an American record of 7:30.41 in the 800 freestyle on the first day of competition. Then, he followed that up with a 4:02.84 400 IM to become the ninth-fastest American man all-time.

Grant House and Trenton Julian also entered their names on the list of top American performers, but in the men’s 100 IM. House grabbed the win, splitting 13.14 on the backstroke leg to take over the lead and never look back. He touched in 51.73, becoming the fifth-fastest U.S man all-time. It seems that this is House’s first official short course meters meet since 2009, and like Johnston, he’s impressed in this relatively new discipline for him. He’s also added his name to the top 10 all-time American male performers in the 100 fly and 200 IM.

Julian swam 52.76 in the men’s 100 IM, placing third behind House and Cody Simpson. While Julian has swum in short course meters meets before, the SCM 100 IM is a new event for him and the time is a new best for him after he clocked 53.40 in prelims. It also makes him the 15th fastest American all-time.

At a minimum we need to go back to SCM in Olympic years.

Any chance of links to the video?

That a boy David!! North Texas is proud of your achievements down under. Look forward to your return home.

Isn’t Jan Wolfgarten a German swimmer? So then Johnston should be ranked #2 American in the event?

Yep he definitely represented Germany internationally (but swam at UF)

Thanks, good catch. He was incorrectly listed as an American on the SWIMS database (possibly because he swam the time while at UF?). Anyway, the title’s been updated!

I’m actually impressed with Cody Simpson. His times seem to legitimately be getting to a solid place. Will he qualify for the SC team by being the first Australian in the 100m I.M?

Clyde Lewis swam a time trial and was a tenth faster but Cody also swam a 47.07 in the 100 free B final so they might select him anyways for the relay