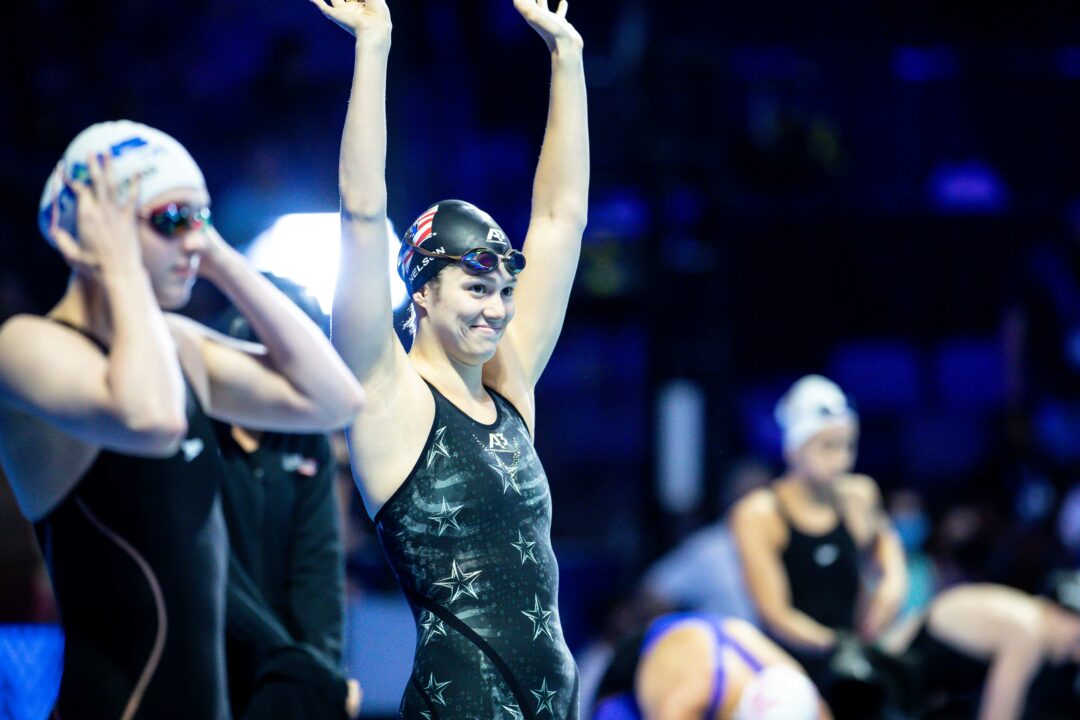 Night one of the 2022 Australian Short Course Championships was filled with high-octane action with the likes of Kyle Chalmers, Lani Pallister and Kaylee McKeown in the Sydney Olympic Park Aquatic Center pool.

As for Chalmers, the man posted the 2nd fastest time of his career to take the men’s 200m freestyle. The Marion ace logged a time of 1:40.98 to take the gold ahead of two Americans, Luke Hobson and Grant House.

You can read more about the men’s 200m freestyle final here.

Pallister snagged a new national record en route to taking the women’s 1500m freestyle. The Griffith University swimmer put up a mark of 15:24.63 to remain as the only Australian woman to ever have dipped under the 15:30 barrier in the event.

Also in the men’s 800m free, it was visiting American David Johnston‘s turn to try on the gold medal. Johnston of the University of Texas produced a new American record in the 8free event, posting a winning effort of 7:30.41.

You can read more about Johnston’s American record here.

Although not falling into the record-breaking category, American Beata Nelson registered a time of 55.74 to take the women’s 100m backstroke over reigning Olympic champion McKeown.

The race was close the entire time, with Nelson posting a front half split of 27.05 to McKeown’s 27.14, with the pair ultimately separated by just .07 as McKeown hit 55.81 for silver.

Rounding out the top 3 was Mollie O’Callaghan, who opted out of the 200m free today to take on this 1back. She secured bronze in 56.02 while reigning short course World Record holder Minna Atherton was also in the race, landing in 4th in 56.95.

According to the USA Swimming database, Nelson’s 55.74 result here checks in as a new lifetime best. Her previous career-quickest swim was represented by the 56.12 she put up last year.

Nelson also raced the women’s 50m fly, taking silver in 25.66. Winning the sprint was Alexandria Perkins, posting a time of 25.52 while Holly Barratt clocked 25.80 for bronze.

With. her result here, Wilson remains the 4th fastest Australian woman ever in this short course meters 200 freestyle event.

Also hitting a new lifetime best was Chelsea Hodges in the women’s 100m breaststroke. The Southport Olympic swimmer dipped under the 1:05 threshold for the first time in her career, producing a winning outing of 1:04.78.

That Russian guy should switch allegiance to Australia if he wants any hope of competing in Paris for two reasons:
1) Russian invasion of Ukraine likely into 2024
2)Russian immense depth in mens backstroke against Australian depth in that stroke

Lol I wouldn’t refuse him representing us

Beata Nelson is such an amazing SC specialist. If she can maintain her stroke rate and keep a 13 meter underwater in a 50 meter pool, she could very well translate that success into LC. For what it’s worth, she’s just seeing it come together. 54.4/1:59.2 in the LC free and. 2:11.5 in the 200 IM

She really is. And as a Wisconsin fan I really hope to see her make the transition to LC success! I also wish she could be eligible for SC worlds. The selection for that meet makes no sense to me.

How did the selection work? Seeing how well she does at ISL I’d be shocked if she couldn’t medal at SCW.

Looked up nikolaev’s age, guess this is the fasted someone born in 1930 has gone