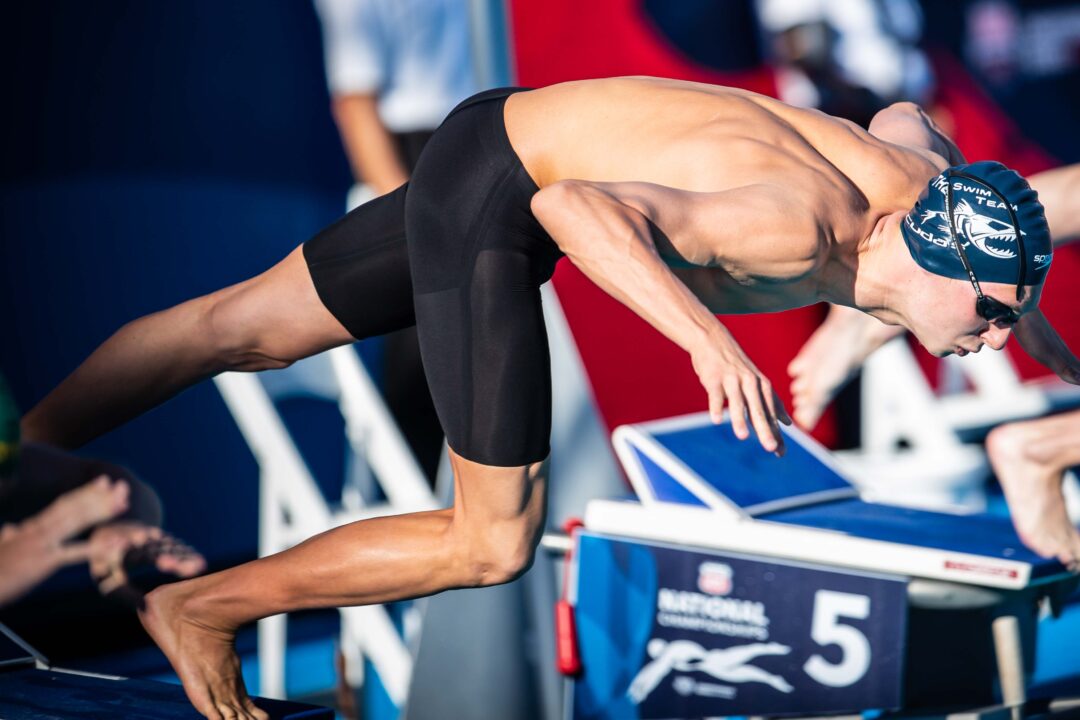 There were several notable swims from the American contingent at the Australian SCM Champs, including David Johnston grabbing third in the 400 IM in 4:02.84. Archive photo via Jack Spitser/Spitser Photography

After winning the 2022 Duel in the Pool, a handful of American swimmers stuck around Sydney to compete in the Australian Short Course Championships. Here’s what they got up to on Day 2 of the competition.

Fresh off setting an American record in the 800 freestyle at his first short course meters meet, David Johnston followed that up with a strong swim in the 400 IM. The rising junior at the University of Texas clocked 4:02.84, finishing third behind Tokyo Olympic bronze medalist Brendon Smith (4:01.11) and ASU’s David Schlicht (4:01.44). That makes him the ninth-fastest American man all-time, slotting between Andrew Seliskar (4:02.42) and Kieran Smith (4:03.29).

Johnston was close to Schlicht through the first half of the race, turning at the halfway point in 1:57.31, just a tenth behind Schlicht. He fell off on the breaststroke leg, splitting 1:09.08, which allowed Se-Bom Lee to move up on him. He powered home on the freestyle leg though, posting a 56.45 split to distance himself from Lee, who split 57.93 on freestyle.

Johnston is primarily known as a distance freestyler, but the 400 IM has become a solid event for him, now across all three pool lengths. In yards, he went his best time of 3:38.90 in prelims at the 2022 NCAA Championships, eventually finishing seventh. He swam his best time in a long-course pool this year as well, posting 4:13.24 at U.S. Trials and at U.S. Nationals, he finished fourth in the event.

On Day 1, Beata Nelson got the better of Kaylee McKeown in the women’s 100 backstroke. In the 200 backstroke, McKeown flipped the script, posting the fifth-fastest performance all-time with a 1:59.48. Nelson was second behind McKeown in a 2:02.73. She was well behind McKeown, but comfortably ahead of Minna Atherton, who took third in 2:03.62.

Trenton Julian got the Americans off to a fast start in the session, winning the men’s 200 butterfly in 1:50.71. Julian touched almost four seconds ahead of second-place finisher David Morgan. It’s a solid time for the new pro, whose best time is a 1:50.01 from the 2021 Short Course World Championships. There, he finished fourth, just missing a medal. With the ISL not running this year, Julian could be eyeing the SCM World Cup Circuit as a way to pick up some prize money. This time puts him solidly in contention to do that.

Continuing to build on his stellar season, Justin Ress took second in the men’s 100 freestyle behind Kyle Chalmers. Ress posted 46.57, just under a second off his best of 45.70 that he set during an ISL match in November 2021. It’s been a tumultous summer for Ress, who recently moved training bases to join the Mission Viejo Pro Group. After heading into U.S. Trials with little expectations for himself and a relaxed mindset, Ress made the Worlds team and after originally being disqualified, won the men’s 50 backstroke. At U.S Nationals in July, Ress said that he’s realizing swimming doesn’t have to be “only swimming fast twice a year,” so expect to see more of him this fall as we shift into a new season.

After setting an unofficial best time in the 200 freestyle at Duel in the Pool, Luke Hobson posted 47.82 in prelims, and was one-hundredth off that to finish third in the B-Final. Like Johnston, it looks like this is his first SCM meet, so it’s a new personal best for him as well.

Johnston’s best LCM time is 4:13 so it was unlikely he had a nice 10 second drop to break Phelps’ WR.

Gotta love Luke Hobson swimming in his first SCM meet.
“Coach, what was my time?”
“Oh cool, another lifetime best time!. What a meet I am having!”

Scaring us with the time almost didn’t realize it was SCM.

Gotta put scm in the title

Is it really on the author though? Yes, it would be nice for every headline to include the course of competition, and the times, and the events, and who was competing, and how the athlete felt on that particular day…but we as readers can also use our brains as well to fill in the context. Obviously if there were a world record performance in long course, which the time might suggest, don’t you think the author would mention that in the title since that would be the attention-getter? C’mon people!