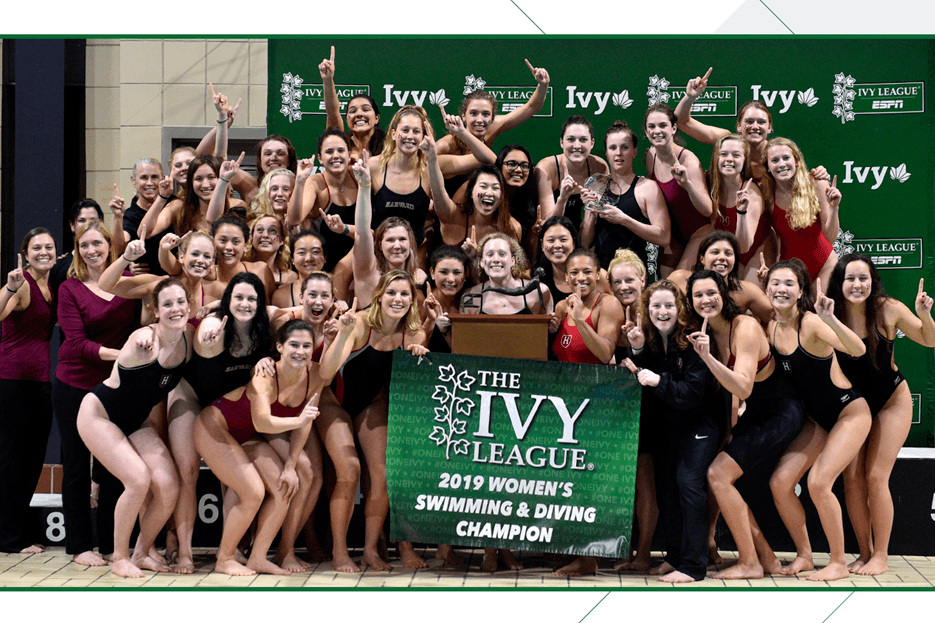 Harvard successfully defended its team title at the 2019 Ivy League Women’s Championships, but all eyes were on the Big Green who stunned the field with two Ivy titles in the 200 breast and 200 back, winning their first event crowns since 2013. Current photo via The Ivy League

Princeton’s Regan Barney defended her Ivy League title in the 400 IM on Day 3 of competition at 2019 Ivy League Women’s Championships.

Harvard successfully defended its team title at the 2019 Ivy League Women’s Championships, but all eyes were on the Big Green who stunned the field with two Ivy titles in the 200 breast and 200 fly, winning their first event crowns since 2013. Dartmouth head coach Jamie Holder has taken the team from 8th place in each of the last 5 years to 6th with just 2 recruiting classes.

Harvard freshman Samantha Shelton and Yale senior Bella Hindley shared High Point Swimmer of the Meet honors with 96 points each. Shelton won titles in the 200 IM, 200 free, and 200 back, while Hindley was the champion in the 50 free, 100 back, and 100 free. Hindley also earned Career High Point Swimmer with 371 points. Princeton junior Mimi Lin was the Rick Gilbert High Point Diver of the Meet with 55 points. Harvard senior Mikaela Thompson earned the Ron Keenhold Career High Point Diver award with 204 points over four years.

Penn freshman Catherine Buroker won her second title of the meet with a 16:11.06 rout in the mile. She broke the Penn program record and notched the 6th-fastest time in Ivy Championship history. Buroker also won the 1000 free with a team record and was runner-up in the 500 free. Harvard freshman Marcella Ruppert-Gomez placed 2nd in 16:25.22, while Dartmouth freshman Sarah Minnigh took 3rd in 16:30.60.

Harvard freshman Samantha Shelton won her third individual event of the championship with a meet record of 1:54.01 in the 200 back. Brown junior Sarah Welch, 6th last year, was runner-up in 1:57.62. Harvard’s Michelle Owens took 3rd in 1:58.02.

In a reversal of 2018’s results, Yale senior Bella Hindley beat Harvard junior Miki Dahlke and crushed the meet record in the 100 free. Hindley went 47.85 to Dahlke’s 48.51. Both were under the championship record of 48.64 that Hindley had set in 2017 and Dahlke had equaled last year. Hindley became the third woman to earn three conference titles in the 100 free, joining Lisa Boyce and Grace Cornelius of Princeton.

Dartmouth freshman Mia Leko posted the 12th-fastest time in Ivy Championship history with her 1:57.62 win in the 200 fly. Leko beat out former champions Joanna Curry of Princeton (1:58.05 for second) and Sonia Wang of Harvard (1:59.00 for third), both seniors. Brown freshman Andrea Wei beat another former champion, Brittany Usinger of Harvard, to top the B final in 1:58.41.

Princeton junior Mimi Lin gave the home team a sweep of the diving events with a win on the 3-meter board in the final individual event of the meet. Lin posted 304.50 points, beating Columbia’s Brighida Rosendahl (299.85) and Sophia Peifer of Princeton (293.95).

Princeton’s Sine Scribbick, who prevailed in 1-meter diving, notched 292.45 points to win the consolation final with the fourth-highest score of the day.

Harvard took 1.8 seconds off the meet record and 2.6 seconds off the pool record with their 400 free relay time of 3:15.47. Mei Lynn Colby, Shelton, Kennidy Quist, and Dahlke contributed to the effort. Yale came in second with 3:16.48 behind Isabelle Henig, Lili Margitai, Raime Jones, and Hindley. Brown (Taylor Seaman, Maddie Salesky, Tatiana Prendella, and Marley Cross) were third with 3:18.80.

Big Green is on the rise folks… Dartmouth is THE place to be for any elite student-athlete!

Wow, Jaime Holder is the Rob Orr of the Ivy League!

That’s over now. 24% of the returning girls quit, taking a lot of points with them. The administration is more interested in helping a 10 year head coach develop as a person, and a coach, than listening to the swimmers. 8th place here we come.

What happened? It’s not so uncommon for Ivy League swimmers to hang it up and pursue other interests after a year or two. (The academic demands are significant, there are other opportunities like study abroad, and there are no scholarships locking people in.) That said, it sounds like there is something more specific happening with the team and/or coach.