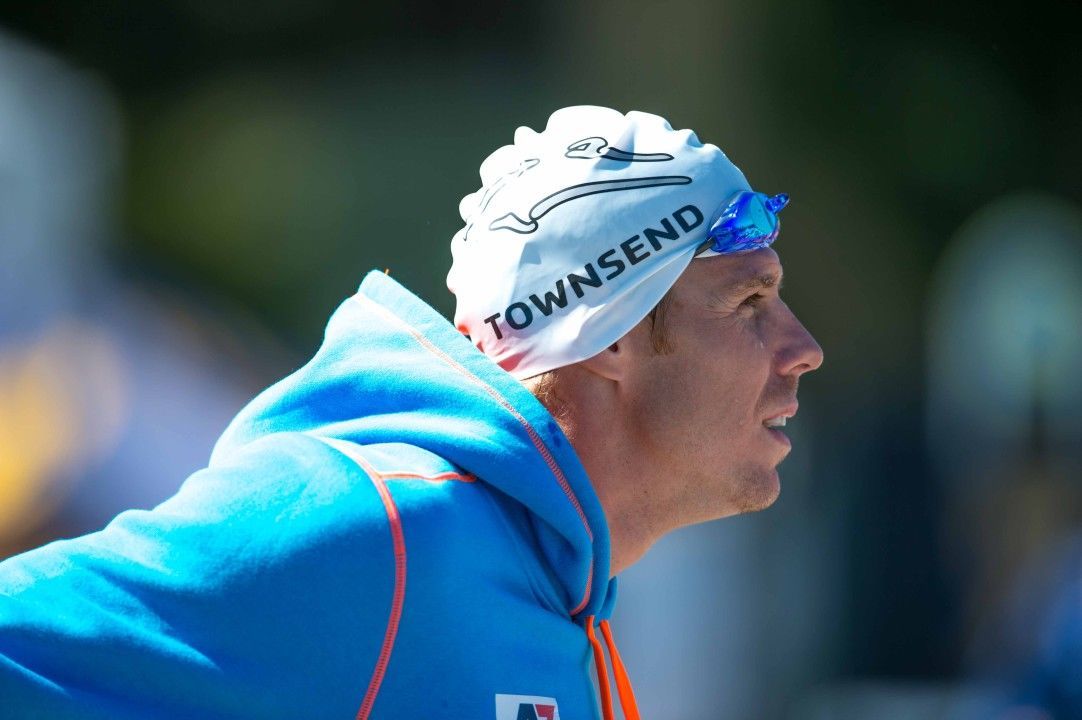 The 2004 Olympic gold medalist will take over at PSC after longtime head coach Garrett McCaffrey stepped down in April. Archive photo via Mike Lewis/Ola Vista Photography

Olympic gold medalist Darian Townsend has been named the new head coach and CEO of the Phoenix Swim Club, the team announced Tuesday.

Townsend, who will assume his new role on October 4, previously served as the head coach and president of the Westside Silver Fins since 2017, and was also named an assistant coach at Ottawa University in Surprise, Arizona (OUAZ) in November 2019.

In September 2020, he was promoted to head coach at OUAZ, keeping his role with the Silver Fins at the same time.

We are excited to announce Darian Townsend as the next Head Coach and CEO of Phoenix Swim Club. Darian will join PSC’s talented coaching staff on October 4, 2021. Welcome to PSC, Darian! pic.twitter.com/tsz4EF7Gfl

In April, Garrett McCaffrey stepped down as head coach of Phoenix Swim Club after nearly a decade with the team. McCaffrey went on to join Seattle U as an assistant coach.

Townsend represented South Africa at the 2004 Olympic Games in Athens, swimming the third leg on the gold medal-winning men’s 4×100 freestyle relay team that broke the world record in a time of 3:13.17. The quartet also included Roland Schoeman, Lyndon Ferns and Ryk Neethling.

After earning U.S. citizenship in 2014, Townsend represented the United States at multiple international meets, including the 2014 SC World Championships and the 2015 Pan American Games, winning a pair of relay medals in the latter.

Also the owner of several Masters world records, the now-37-year-old won one gold and three silver medals at the 2017 Masters World Championships in Budapest, Hungary.

As a collegiate swimmer, Townsend swam at both the University of Florida and the University of Arizona, winning a total of two individual and five relay NCAA titles, plus one team championship with the Wildcats in 2008.

The KwaZulu-Natal, South Africa native graduated from the University of Arizona in 2010 with a bachelors in Sociology.

Anyone want to explain the downvotes? Darian seems like a good fit?

It’s probably someone who applied and did not get the offer.

Exactly! He is an awesome coach and a great person, and that is based on our own family experience with him.

A known coach for the area – playing it safe

The valley NEEDS a GREAT Coach!

Don’t know much about the new head coach at Scottsdale but assistant coach, Bob Platt, is one of the best coaches out there. A man that coaches because he loves the sport.

PSC has been searching for over 4 months, so finally getting someone – anyone – is a huge win for them, and I hope Darian gives them the guidance and direction they need. The valley already has “GREAT” coaches, and I think most are very happy to see Darian continue to stick around the area.

you have no idea who darian is then. do your research before you say something like this.