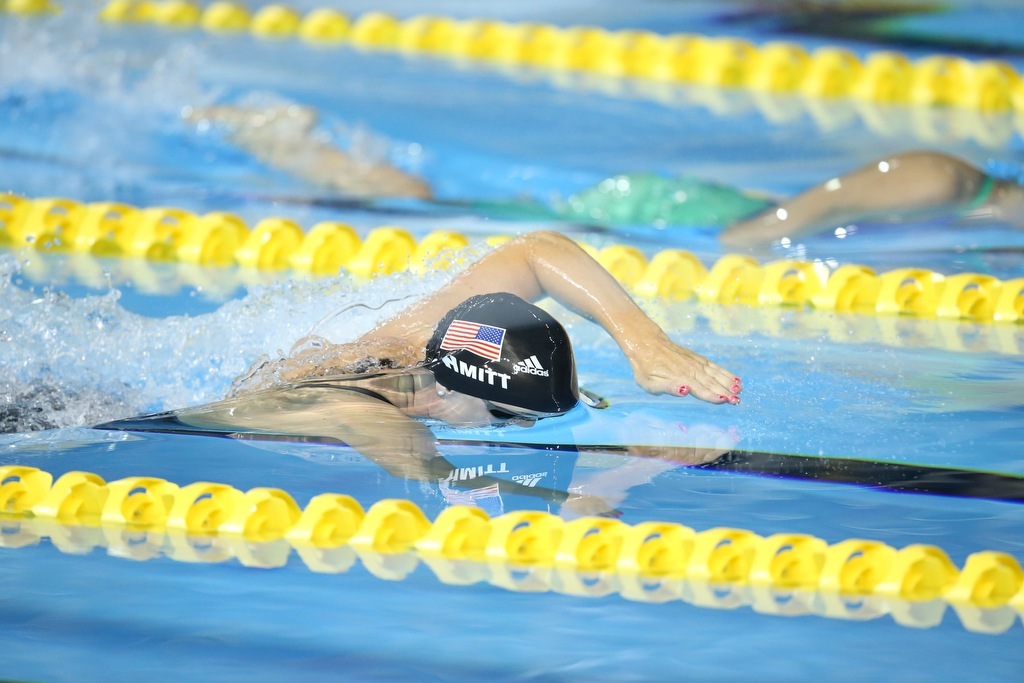 The American 4x100m medley relay team at the Toronto 2015 Pan American Games put up an amazing time that under careful consideration might be faster than what the American ladies can go at the 2015 World Championships in Kazan, Russia. Current photo via Chris Tanouye/www.christanouye.com

The American 4x100m medley relay team at the Toronto 2015 Pan American Games put up an amazing time that under careful consideration might be faster than what the American ladies can go at the 2015 World Championships in Kazan, Russia.

Their time beat the time that Missy Franklin, Jessica Hardy, Kendyl Stewart, and Simone Manuel put up to finish second at last summer’s Pan Pacific Championships. The same four will likely be the lineup for the American women’s 4x100m medley relay this summer at worlds.

Looking at the splits from both relays, it’s easy to see where the strengths and weaknesses lie. Franklin can without a doubt go faster than a 59.99 this summer on the leadoff. She was experiencing back spasms that kept her from competing at her full potential in 2014, which is likely why Franklin’s split was slow in relation to her best time.

Hardy has the potential for a 1:05 breaststroke split, or even a 1:04. Stewart will likely be around 57-flat, and after Manuel’s performances at the NCAA Championships it’s likely that she can go faster as well.

One of the best ways to compare these eight swimmers is through looking at their in-season best times. A rested time at Pan Ams should be faster than a non-rested in-season swim, so a direct comparison of times from the 2014-2015 season isn’t fair.

Although these in-season swims give a fantastic representation of what to expect heading into championship meets, each swimmer swims differently in-season and has different focus meets. Worrell, Franklin, and Manuel for example all peaked for NCAAs in March.

Even if you replace Jessica Hardy’s 1:04.45 100m breaststroke personal best from 2009 (suited), with her textile best of 1:05.18, the worlds team still has a commanding lead. For the sake of the argument however, Hardy’s 1:04.45 was used for the calculation below.

The worlds team certainly has the potential to be faster than the Pan Am Games team this summer, however the results might be a lot closer than previously expected. If all those on the worlds roster are not in top form, the Pan Am team could be the top women’s medley relay of the summer.

Unfair to compare the Pan Pacs time. Those conditions were not optimal.

Not sure why people keep forgetting this factor. Pan Pacs were outside, in the Australian winter, in the rain. Even Irvine, the outdoor shallow turn side pool (think Phelps in the 100 free), was not ideal. Our “A” team should be faster this year based on facilities alone.

Whilst I will fully agree with you that the conditions at 2014 PP were far from optimal; they were the same for ALL competitors. This race was actually on the final night in calm conditions; not the rain & cross winds of previous days/nights. As for Kazan, we haven’t really any proper 2015 LCM gauge on just where the likes of Franklin, Hardy & Manuel “are at”. – Meili & Worrall swam strong prelims in indiv but their finals & relay swims were considerably slower. Whilst a sub 1.05 brs leg from Hardy is a plausible scenario, we’d need to know what/how she’s performing at the meet itself to know if that’s a realistic outcome or whether 1.05mid-high is more… Read more »

I would say the Pan Pacs team would have been a loads faster if they were indoors.

Aussies will win the medley in Kazan anyway 😉