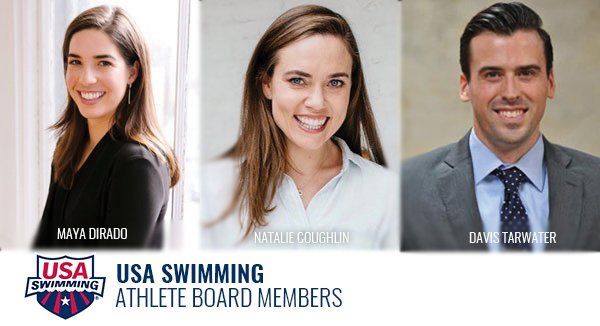 Natalie Coughlin, Maya DiRado and Davis Tarwater have been elected as USA Swimming's new athlete representatives on the Board of Directors. Current photo via @USASwimming on Twitter

Natalie Coughlin, Maya DiRado and Davis Tarwater have been elected as USA Swimming’s new athlete representatives on the Board of Directors.

Coughlin, DiRado and Tarwater were elected from six nominees. Not selected were Nathan Adrian, Andrew Gemmell and Brad Craig. Previously, we’d reported that the top vote-getter would serve a 4-year term, the next-highest a 3-year term and the third-highest a 2-year term. A source tells us that Coughlin will serve the 4-year term, DiRado the 3-year and Tarwater the 2-year.

From our previous report: To be eligible, athletes must have:

I certainly hope that Natalie Coughlin Hall will focus less on her winery, and more on whining on behalf of USA Swimming and its athletes. With USA Swimming’s focus on Safe Sport, it may be a little problematic to have the owner of a winery on its Board, but one can hope that she will act with discretion regarding her business interests (which she is entitled to have).

Yep.Role model issue though for Coughlin, and also potential conflict of interest.Time to start speaking out on these issues. Watch any Senate hearings lately? USA Swimming should revoke its rule.Is there any place left that kids and sober adults can go without having to deal with liquored up adults? Alcohol abuse often leads to sexual abuse as well.

These amazing people will serve with integrity and forward thinking! WOW!!!!

A couple of questions.

Davis is listed as a board member on their site right now as an athlete rep along with Derek Paul and Chip Peterson. Is this a position renewal for him?

Also, the site lists Natalie Hall as an ex-officio board member as USOC Athlete Advisory Council Rep, along with Anthony Ervin. Will she no longer hold that position, or will she be one board vote for both position? Not sure how I feel about that.

why call them “athlete board members” when the three are not competing anymore? They are all very accomplished both in and out of the pool, and they all have the experience of being national team and Olympic team members. They all have the merit and experience to be there, but it seems to me like USA Swimming implied there would be reps that are current swimmers and now there is not.

Easy E – they’re ‘athlete members’ because there are certain requirements on them as elite athletes to be eligible to run, as listed at the end.

The requirements are inclusive. I’m curios about a check on how they are written here. Are the requirements either or or? Dirado (I think) is just outside the 24 month participation and Tarwater is probably more like 6 yrs removed (unless they do Masters). My point is that they should call it “former swimmers we all admire” ambassadorship and not give the notion that current swimmers will be on it if they are not in fact on it

They are either/or. The basic gist is you either need to be an active athlete (the 24 months) or be within 10 years of your last participation. The requirement comes from 36 U.S.C. 220522(a)(10) (the Amateur Sports Act provision that defines how the 20% athlete representation rule is defined) (https://www.law.cornell.edu/uscode/text/36/220522).